It only took eight innings for baseball's umpires to register the worst call of the postseason and the Atlanta Braves paid a big price for it in their 6-3 National League wild card loss to the St. Louis Cardinals.

With one out in the eighth inning and runners on first and second, Atlanta's Andrelton Simmons hit a fly ball to left field. The ball dropped in between backpedaling shortstop Pete Kozma and left fielder Matt Holliday and it looked as if the Braves would have the bases loaded with one out to stage a rally from their three-run deficit. Left field umpire Sam Holbrook, however, made a delayed infield fly rule call as the ball neared the ground. The call ruled Simmons out for the second out of the inning and an angry Turner Field crowd responded by showering the field with garbage.

Atlanta manager Fredi Gonzalez used the 18-minute delay that followed to put the game under protest. Major League Baseball denied the protest, however, because the infield fly rule is strictly a judgment call and not subject to any appeal. There is no distance mentioned in the infield fly rule language and an umpire must only determine that an infielder could have caught the ball with an ordinary effort.

The catch, however, is that the umpire must make the decision "immediately," not when the ball is within feet of hitting the ground. 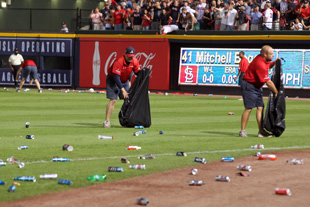 An infield fly is a fair fly ball (not including a line drive nor an attempted bunt) which can be caught by an infielder with ordinary effort, when first and second, or first, second and third bases are occupied, before two are out. The pitcher, catcher and any outfielder who stations himself in the infield on the play shall be considered infielders for the purpose of this rule.

When it seems apparent that a batted ball will be an Infield Fly, the umpire shall immediately declare Infield Fly for the benefit of the runners.

Kozma did seem to have a good track on the ball but peeled off when he thought he heard Holliday calling for the ball. Holbrook's arm did not go up until Kozma had been called off, though, which is the biggest reason why the Braves and their fans should be angry since Holbrook didn't make the call in anything that could be considered immediate fashion.

Holbrook was asked after the game if he thought he had made the correct call after seeing a replay and he reportedly answered "absolutely." He also said that not one umpire at the game had a problem with his call. A MLB source tells WEEI that the rule was correctly applied 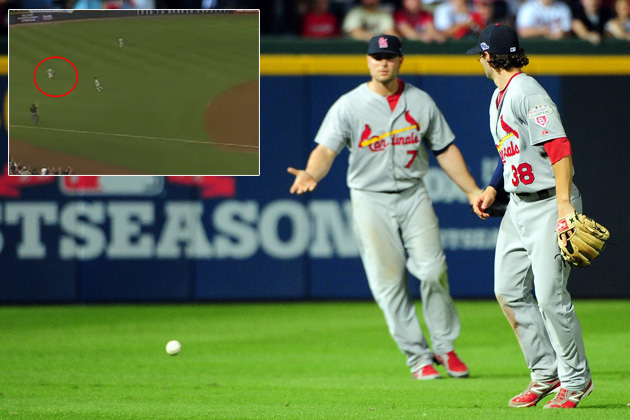 Cardinals closer Jason Motte entered the game after the delay and the call proved to be a big one as he walked Brian McCann. The free pass only loaded the bases, though, instead of walking in a run and the inning ended when Michael Bourn struck out in the next at-bat.

Would Holbrook holding off on the call have made a difference for the Braves? We can't say for certain that they would have come back to earn a victory and a spot in the NLDS against division rival Washington. But we can say that baseball and its umpires earned a black eye in record time and not only did it spoil the debut of Bud Selig's play-in game baby, but it also overshadowed the final game of Chipper Jones' career. That's a shame.