The Morning After: Rodgers Reasserts Rule

Richard Sherman beats Tom Brady; taunts the Pats with ‘U MAD BRO?’ after the game

Two things we know about Seattle Seahawks cornerback Richard Sherman: He's one of the best young defensive players in the league, and he doesn't lack confidence. The former Stanford receiver, selected in the fifth round of the 2011 NFL Draft, had perhaps his best game in Seattle's 24-23 win over the New England Patriots. Sherman was all over the place, frequently breaking up and deflecting passes from Patriots quarterback Tom Brady to his receivers.

When Sherman picked off a Brady pass to Deion Branch with 4:52 left in the third quarter (note: teams are learning to avoid throwing the ball anywhere near Sherman when he has inside position on a receiver), Brady apparently told Sherman and safety Earl Thomas to " see him after the game when they win..... I found him after....,"

Sherman's Twitter response, since deleted, came with a picture. 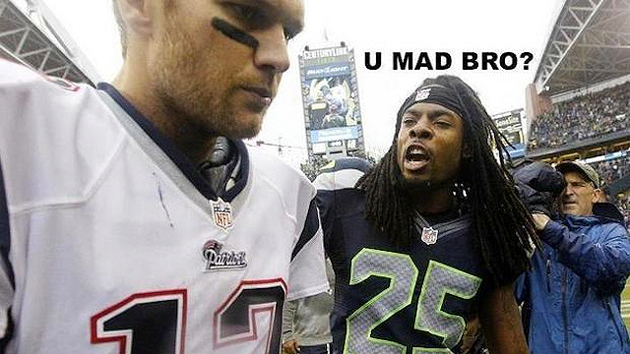 In the Seahawks' locker room after the game, Sherman was chirping like Muhammad Ali.

"Any time you run a gimmick offense, you're a little bit afraid -- you're not sound in what you're doing in your base stuff," he told Yahoo! Sports right after the game. "You're running this hurry-up stuff, and there's a reason it's not effective, because there are great defenses out there who will stuff it. We figured out early in the game what the calls were, what they were doing, and what the adjustments were. We started executing better, and that's why they got only six points in the second half."

From the Tacoma News Tribune:

"I kept saying I'm going to get that next time. Every TV timeout, I went up and said it right to [Brady]: 'Please keep trying me. I'm going to take it from you.' That was when they were winning. He just gave me that look and said, 'Oh, I'll see you after game.' Well, I made sure I saw him after the game."

"They're going to say, 'What's wrong? He threw two picks. Well, he should have thrown five picks. If Earl catches every one, then it's a long day for him. People don't understand. We've got great players out here. We've got great players in the Pacific Northwest. The Seattle Seahawks have a lot of talent. People, they don't look at the film. They don't analyze anything. That's why these analysts and commentators need to shut their mouth."

Sherman went on and on by his locker, orating for an ever-increasing group of media folks. "Me and Earl walked up to him and said, 'We're greater than you. We're better than you. You're just a man -- we're a team.' That's the Brady Bunch; this is a defense. We've got 11 players out there to play great ball, and we're never going to let one man beat us. It's not just about one man. If they've got 11 players out there on offense, then they're one hell of a team."

Later, when asked more seriously about his defense, Sherman was slightly calmer in his assessment.

"I studied a lot," he said. "I studied them a lot, and I knew what was coming. We were just kind of baiting them into throwing what we wanted them to throw. We had a certain scheme set up, and I don't want to say I'm prideful like that, but I'm prideful like that. I don't want anyone to catch the ball on my side -- if the ball's on my side, I want to pick it off or have the ball hit the ground."

"It's instinct -- it's a lot of stuff you can't explain," he said of his ability to cover receivers all through the patterns. "If I tried to sit here and write a book on how to play cornerback, I'd be out of luck, because a lot of it is just instinct -- I feel this, or I feel that. And I go with it every time. I don't doubt myself, and our coaches do a great job making sure that we're technical in everything we do. They don't give us a break. When we're jamming [receivers], no matter who we're going up against, they want perfect reps every time, and that's what I try to do."

So far, so good. We'll see if Sherman and his buddies can keep it up against the San Francisco 49ers this Thursday night. If that happens, you might want to keep a sharp eye on Sherman's Twitter account.

HOUSTON (AP) -- This is more like it for Aaron Rodgers and the Green Bay Packers.

Aaron Rodgers did the "Discount Double Check" when he shouldn't have. He ran up the middle for a touchdown, spiked the ball and mimicked putting on the championship belt - his celebration for rushing touchdowns - not knowing there was a holding penalty behind him to negate the play.

Hey, critics need to find something wrong with Rodgers' night, right? There wasn't anything else to nitpick because he was just about perfect against Houston. Even during his incomparable MVP season last year, or the Super Bowl-winning season before that, he never threw as many touchdowns in one game as he did Sunday night.

Rodgers threw six touchdowns to tie a team record, which was held by Matt Flynn (yes, that factoid is incredibly odd). The level of competition made the performance that much more impressive. Rodgers threw all those touchdowns against a Houston defense that was third in the NFL in yards allowed and had allowed just six passing touchdowns in its first five games.

Green Bay's 2-3 start before the Houston game wasn't what the team wanted, although one of those losses came during the replacement ref debacle in Seattle. Sunday night's 42-24 win seemed to be about Rodgers emphatically reminding people that he is the reigning MVP, and the Packers are still a championship contender as long as he's under center.

Rodgers admitted that Sunday was a little personal for him.

"We're all just tired of answering questions about what happened to the Packers, what happened to me," Rodgers told NBC in a postgame interview. "Just getting back to the way we're capable of playing. We haven't gone anywhere."

Later he was asked by Michele Tafoya what he would say to the critics.

"Shhhhhh," he said, before he walked off.

Some of the criticism surrounding the Packers was legitimate. They did blow a 21-3 halftime lead at Indianapolis last week, after all. Rodgers, as the leader of the Packers, carried the Packers out of whatever slump they were in.

Rodgers has some tremendous athletic gifts that make him a special quarterback, but one of his strongest talents is his ability to make remarkably accurate deep throws. Only two of his touchdowns against Houston were from within the 10-yard line. He had scoring throws of 41, 21, 48 and 18 yards.

The 48-yard touchdown to tight end Tom Crabtree wasn't the typical Rodgers big play where he makes a perfect bucket throw. But it was as impressive as any play he made on his big night. Rodgers was rolling right on third and 1 and leaped just before he got nailed by a Texans defender with a clear shot on him. Rodgers still got enough zip on the pass to deliver a strike that traveled about 25 yards in the air right to Crabtree, who was wide open and walked into the end zone.

Rodgers finished the night completing 24-of-37 passes for 338 yards, six touchdowns and no interceptions. He looked like the NFL's reigning MVP.