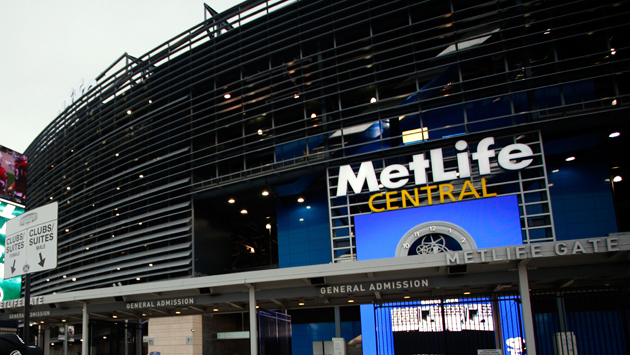 According to New Jersey State Police, a 42-year old man fell over 20 feet from an escalator as he was leaving MetLife stadium following the New York Giants' 27-23 win over the Washington Redskins.

Sgt. Adam Grossman told the Associated Press that the man fell over the side of an escalator and fell onto a metal stage below. It is unclear at this time what caused the fall. The man was airlifted to Hackensack University Medical Center and was in critical condition when he arrived.

Some fans tweeted from the scene that the man had fallen to his death, but reports later confirmed that he was alive when he was transported to the hospital.

This isn't the first time an individual has fallen in an NFL stadium this year. On Aug. 31, 25-year-old Jonathan Kelly fell to his death at Houston's Reliant Stadium during a preseason game between the Houston Texans and Minnesota Vikings.

Outside the Game from Yahoo! Sports:

Pats escape with an overtime win against the Jets (VIDEO)

When New England's Devin McCourty fumbled away a kickoff return just before the two-minute warning, some unlikely possibilities were suddenly on the table.

The much-maligned Jets had the ball already in field-goal range in a tie game and were looking at taking over first place in the AFC East. The Patriots were inexplicably staring down 3-4, with four very close, late, heartbreaking losses. And anyone who happened to still be alive in their survivor pools were going to get knocked out taking an 11.5-point favorite to win.

The Jets made a mistake. They didn't put the Patriots away when they had the chance.

New York's first two plays were runs up the middle that gained 3 yards, including the first one on a Wildcat play from Tim Tebow, even though Mark Sanchez was in the middle of a 328-yard passing day against a Patriots secondary that has been suspect, at best. The third and 7 pass call resulted in a sack. Big and bold Rex Ryan played for a field goal when he had the chance to knock out the Patriots and one of the greatest quarterbacks in NFL history.

When the Jets got that field goal with 1:37 left, taking all of 24 seconds off the clock, the only question was whether Tom Brady was going to win the game in regulation or simply lead a game-tying drive to send it to overtime. Brady hit Rob Gronkowski for 15 yards, then 12 more. He hit Danny Woodhead for a pair of completions that gained 27 more. The Patriots tied the game on a Stephen Gostkowski field goal. That should have surprised nobody.

New England won the toss in overtime, Brady led another drive that ended with a Gostkowski field goal, then Sanchez fumbled on the Jets' only possession to allow the Patriots to escape with a win. New England is in first place in the division at 4-3.

New York played a very good game. Statistically, the Jets played the Patriots nearly even across the board. New York had a great chance for the upset win and first place in the AFC East at the two-minute warning. Instead, the Jets let Brady and the Patriots hang around and beat them.

PRICE & AVAILABILITY SUBJECT TO CHANGE. USE COUPON CODE FREESHIP FOR FREE SHIPPING ON ORDERS OVER $150! Click below for current prices and availability of Texas Tech Red Raiders at Kansas State Wildcats TICKETS

by College Football and Basketball Ticket Classifieds in General, NCAA Sports
OK State Cowboys Football!! Buy discount tickets to TCU Horned Frogs at Oklahoma State Cowboys at Boone Pickens Stadium on 10/27/2012 from your urban event ticket source, MetroSeats.com. The seats are located in section 101 row 11 - get them now before these seats are SOLD OUT!

PRICE SUBJECT TO CHANGE. USE DISCOUNT CODE FREESHIP FOR FREE SHIPPING ON ORDERS OVER $150! Click the link below for current prices and availability of TCU Horned Frogs at Oklahoma State Cowboys TICKETS

by College Football and Basketball Ticket Classifieds in General, NCAA Sports
We have some sweet Field tickets available to the ISU Football game on 10/27/2012! Metroseats has 3 tickets to Baylor Bears at Iowa State Cyclones at Jack Trice Stadium on 10/27/2012. The seats are located in section FIELD row 3 - get them now before they are gone!

PRICE & AVAILABILITY SUBJECT TO CHANGE. USE COUPON CODE FREESHIP FOR FREE SHIPPING ON ORDERS OVER $150! Click below for current prices and availability of Baylor Bears at Iowa State Cyclones TICKETS

PRICE & AVAILABILITY SUBJECT TO CHANGE. USE COUPON CODE FREESHIP FOR FREE SHIPPING ON ORDERS OVER $150! Click below for current prices and availability of Michigan State Spartans at Wisconsin Badgers TICKETS