PORTLAND, Ore. (AP) -- Dwight Howard's 33 points and 14 rebounds were not enough for the Los Angeles Lakers in a 116-106 loss to the inspired Portland Trail Blazers on Wednesday night.

SALT LAKE CITY (AP) -- The Utah Jazz made three major offseason moves, with a pair of trades to acquire Mo and Marvin Williams and the acquisition of free-agent Randy Foye.

When the Houston Rockets traded for James Harden this weekend, there was some question as to what kind of player they were getting. While all agreed that Harden was a very good player and one of the best shooting guards in the league, it was unclear if (and how quickly) he could acclimate himself to being a clear-cut first option after spending his first three NBA seasons with Kevin Durant and Russell Westbrook.

On Wednesday night, in his Rockets debut at the Detroit Pistons, Harden answered those questions by scoring 37 points on 14-of-25 shooting, dishing out 12 assists, and playing 44 minutes in a 105-96 win. Harden was particularly impressive in the fourth quarter, leading Houston to a 33-15 advantage to take control of the game.

Those marks set a number of notable milestones, including the second-most points in NBA history for a player in his first game after changing teams. Harden also became only the fourth player in the past 25 seasons to tally at least 37 points, 12 assists, six rebounds, four steals, and a block. The other three are pretty good company: Michael Jordan, Larry Bird, and Dwyane Wade. Counting the official completion of his five-year, $80-million contract extension, I'd say Harden had a pretty good day.

As evidenced in the highlight video above, Harden didn't look especially different from the player we saw in Oklahoma City. He hit jumpers, slashed to the lane, moved in transition, and did virtually everything else we know him to be capable of doing. What was different is that he was asked to do more of it and didn't suffer whatsoever. The quality of play wasn't different, but the responsibilities were.

The Pistons are not a particularly good team, and the fact that Harden had to play 44 minutes against them suggests rest might be at a premium for the Rockets star this season. But, no matter how much we equivocate, Harden proved that he can lead an offense. Guys don't score 37 points on efficient shooting and find their teammates for good shots just because they had a good matchup. It was a dominant performance. 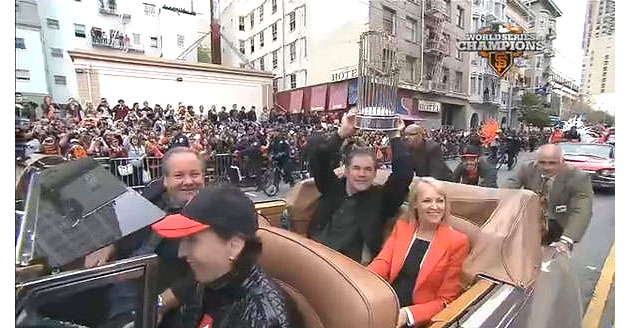 A funny thing happened to San Francisco Giants manager Bruce Bochy on the way to a downtown rally honoring the World Series champions Wednesday. The Rolls Royce in which he and his wife were riding apparently ran out of gas along the Market Street parade route and had to be pushed by good Samaritans to Civic Center Plaza.

Boy, it's a good thing the Giants beat the Tigers in four games to win their second world's championship in three years. Anything other than a sweep and they probably run out of gas. Am I right? But seriously, either someone forgot to fill 'er up in the morning (looking at YOU, Brian Wilson), or the gas tank on a '58 Rolls (a guess) is the size of the thermos. Someone needs to ask this lady. She was driving. Hopefully this isn't a prelude to the Giants being cheapskates this winter. Gas prices have been dropping, you know?

Thanks to the Hall of Very Good for being in position to get a screen cap. And further thanks to a semi-anonymous person uploading to YouTube, because we got something even better: Video of Comcast Sports Net Bay Area video of people pushing the car along the parade route:

And I used to make fun of my grandfather for taking pictures of the TV when, for example, the space shuttle landed for the first time. (No, he really did.) But I kid. We're grateful for this being the best available video of the Giants parade blooper.

Here's a little citizen video of the Rolls before the internal combustion failure. Sharp ride. And here's what Bochy told the throngs thongs at the rally once he reached the promised land. Nice speech. All was well that ended well. Although the journey was a lot of fun, too.

CHICAGO (AP) -- The Chicago Bulls insist they can be more than just a run-of-the-mill team without Derrick Rose. They're off to a winning start.

PHILADELPHIA (AP) -- Even in absentia from the opening night roster, Andrew Bynum heard a roaring ovation when he was introduced.