Is there a quarterback controversy in Washington, D.C.? One guy seems to think so… 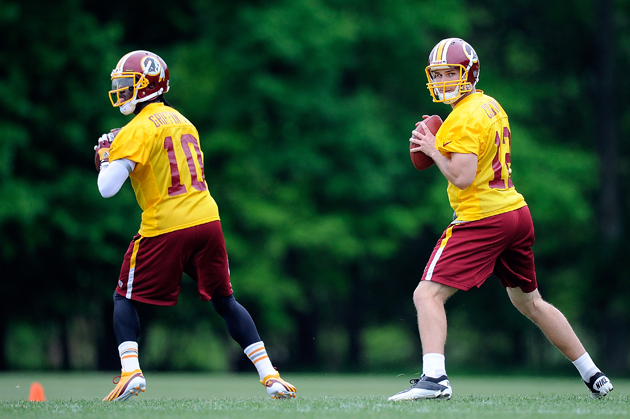 You'd think that if a team trades three first-round picks and a second-round pick for the right to take a quarterback second overall and name that quarterback the starter as soon as humanly possible, said team will overlook the occasional rough preseason start, and avoid benching that highfalutin quarterback in favor of a rookie backup selected in the fourth round of that same draft. Makes sense, right?

Not according to former NFL quarterback and current Chicago Bears announcer Jim Miller, it doesn't. After Washington Redskins quarterback Robert Griffin struggled to stay upright against Chicago's first-team defense on Saturday night, Kirk Cousins -- the fourth-round pick in question -- came in and lit it up against a bunch of reserves. Griffin, under pressure for most of the first half behind an offensive line that will probably give him fits all season, completed 5 of 8 passes for 49 yards and was sacked three times. Two and a half of those sacks came from Bears defensive lineman Israel Idonije, who may be the most underrated front-seven defender in the NFL now that people actually know who Justin Smith is.

Cousins, on the other hand, came in for the second half and played exceptionally well with reserve teammates against Chicago's backups -- he finished his day completing 18 of 23 passes for 264 yards and three touchdowns. Griffin faced more complex defenses (especially in pass pressure), but Miller was unmoved by the difference. This is what he said on the air, per the always-excellent D.C. Sports Bog:

"Kirk Cousins, let's put it this way. I hate quarterback controversies, but after how he's played so far, people are gonna say that."

Uh, no, Jim. They're not, unless they have brain damage. Even if Cousins outplayed Griffin against the same sort of defenses (which he hasn't), there's no way in heck the Redskins would open it up for discussion, and very little chance that anyone who wasn't a staunch Spartan (Cousins played his college ball at Michigan State) would believe such a thing was in the works.

Oh, wait, you say? Miller went to Michigan State, and is also an announcer for the team's Spartan Network, you say? No way!

"People thought I was crazy when this kid came out," Miller also said on Saturday. "Because here's what I know about Kirk Cousins: He can audible, he can pocket pass, he's won the most games the last three years in the Big 10, and he is a sharp, sharp quarterback."

I don't disagree with anything Miller says there, except for the part about the quarterback wins. I had Cousins on the Shutdown 50 board this year, gave him a second-round grade, and was very surprised that he dropped as far as he did. But whereas Cousins was No. 45 on that board, Griffin was No. 1, and for very distinct reasons.

So, fear not, RG3 -- your starting position is most likely safe in the Redskins' front office and in the court of public opinion. There's just one dissenting voice at this point.

Read the rest at: Is there a quarterback controversy in Washington, D.C.? One guy seems to think so…