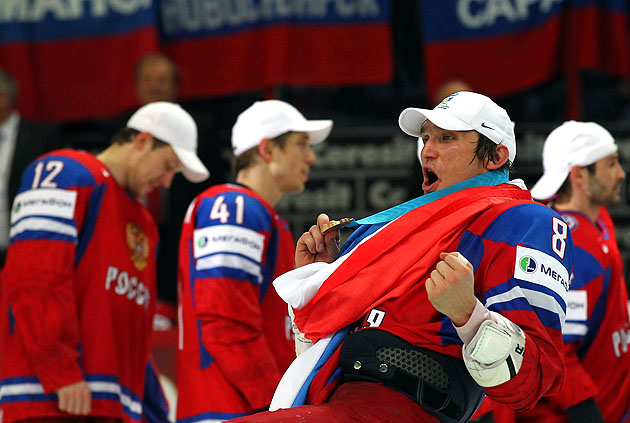 While Alex Ovechkin signed his contract with Dynamo Moscow of the KHL on Wednesday, he used his other hand to toss a bomb back at the feet of the National Hockey League.

If the owners cut the players' salaries severely in the next collective bargaining agreement, the Washington Capitals star said he would consider remaining in Russia.

"If our contracts get slashed, I will have to think whether to return there or not. I won't rule out staying in the KHL, even past this season," he told RIA Novosti, as translated by Capitals Insider.

He reiterated the threat in a conference call with the Washington Post and the Washington Times on Wednesday, adding that other NHL players might join him in staying overseas:

"I said it before, before I sign contract, if the league decide to cut our salaries and cut our contracts for what they want, I don't know how many guys will be coming back," Ovechkin said on conference call with The Washington Times and Washington Post on Wednesday.

"We signed contracts before and why they have to cut our salaries and our contracts right now? They sign us. [Now they] want to cut it, I think it's a stupid idea and a stupid decision by the NHL, [commissioner Gary] Bettman and the guys who work there."

• While I'm sure his comments are hyperbole, let's take them at face for a second. I find it impossible to reconcile the NHLPA's message of "the people that suffer the most are the fans" (S. Crosby, 2012) and "they're the ones that suffer from [a lockout] (J. Reimer, 2012) with Ovechkin pondering if he'd turn his back on those very fans if his $9 million base salary is reduced under a new CBA.

At this point in the lockout, it's completely counterproductive to the NHLPA's messaging.

• Why This Is An Empty Threat, Part I: The KHL shouldn't, in theory, allow it. As Pierre LeBrun noted:

KHL and NHL have a memo of understanding respecting each league's player contracts. So in theory, Ovechkin would not be allowed to stay and play in KHL post an NHL lockout. Then again, it's the KHL. So you never know.

• Why This Is An Empty Threat, Part II: Just a hunch, but IMG isn't pimping out Ovechkin to sponsors as "KHL MVP" and Nike didn't sign him to model their gear in KHL anonymity. Again, just a hunch.

The NHLPA has masterfully controlled its message during the summer; one wonders how that possibly continues now that players are spreading to across Europe.

Read the rest at: Alex Ovechkin reaffirms that he might stay in Russia if NHL reduces player salaries