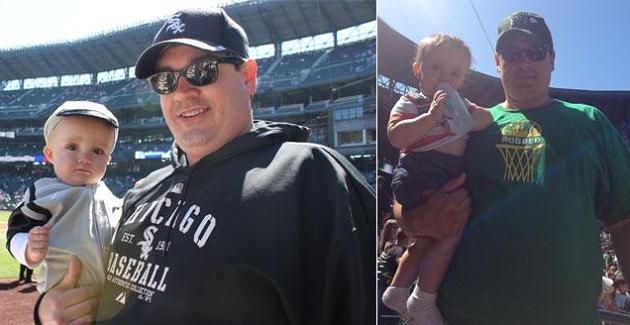 Many of us have been going to baseball games for years, decades even, and have never had our hands on a live baseball, let alone come close to witnessing something historic.

On the other side of the coin, you have lucky fans like 15-year-old Adam Corder in Baltimore who have not only caught one home run ball in their life, but caught two in the same game ... from the same player.

That's really lucky, and beyond that quite amazing, but it pales in comparison to the experiences of the luckiest baseball fan to ever live. Perhaps we could even call him the "perfect fan."

His name is Bode Dockal. He's all of 9 months old. He lives in Seattle and so far his parents, Paul and Jennifer, have taken him to two baseball games in his young life. And yes, in both of those games, Bode was witness to the rarest achievement in baseball — a perfect game.

Back on April 21, Bode's parents, who are both Chicago transplants and White Sox fans, decided that Saturday afternoon would be the perfect day to take their son to his first game. They just didn't realize how perfect it could be until Paul looked at the scoreboard during the middle innings and realized what was happening.

"I turned to my wife, because it was a warm day and she didn't know how long we should keep Bode out there," Paul said. "I was like, 'Hey, is everybody good?' She asked why and I said, 'Something really interesting is happening here. I can't talk about it, but I think it's happened less than 20 times in the whole history of baseball.'"

It was at that point they decided they wouldn't be leaving early, and because of that decision they were among those celebrating as Philip Humber struck out Brendan Ryan to enter the history books.

With one (perfect) game now under his belt, the Dockals decided it was time to take Bode to his second game when Paul's brother, Pete, paid a visit from Texas this past week. Pete had never been to Safeco Field, and when they saw Felix Hernandez was due to pitch on Wednesday afternoon, the decision to go that day was made easy.

"If you're coming in for one game, that's the guy you want to see," Paul told his brother.

Truer words were never spoken, because King Felix would incredibly equal Humber's performance from April to become only the 23rd member of the perfect game club.

That's about as wild as it gets. But it also makes me wonder how many other fans not only attended both perfect games, but also Seattle's combined no-hitter on June 8. You know those people are out there, but I guarantee not a single one of them can make the same claim Bode Dockal can. Well, if he could talk that is.

But where does he go from here?

Paul said that, in a way, he wishes his son would never attend another game — nothing could top what he's already seen. But he knows Bode will have to relive the magic of Humber and Felix through photos and stories rather than actual recollections. Plus, someday decades from now, Bode might walk through the gates of a stadium with a son of his own.

And on that day, perfection just might strike a third time.

I hope that day happens. And when it does, I hope I'm still around to write about it.