SAN FRANCISCO — After his teammate went 2 for 3 with a key two-run double in Game 6 of the NLCS on Sunday night, San Francisco Giants closer Sergio Romo assessed the contribution Marco Scutaro has made since the team traded for him in late July. Romo didn't downplay it.

"That's the blockbuster trade we made," said Romo, who also referred to Scutaro as the team's MVP. On a team that includes NL MVP candidate Buster Posey, that's saying a lot. But Scutaro did hit .362/.385/.473 while driving in 44 runs in his 61 regular-season games with the Giants, finishing with a 20-game hitting streak.

In the shorter term, Scutaro came into Game 6 batting .293 in the playoffs. OK. But ever since St. Louis Cardinals slugger Matt Holliday ran over Scutaro in the first inning of Game 2 he's been roaring, going 9 for 19 with a .632 slugging percentage. It's just a coincidence, Scutaro says.

"Actually, I got a little fame from getting hit by Holliday," Scutaro said with a smile. "It was kind of weird."

Scutaro's newfound fame is coming at just the right time. Thanks to a 6-1 victory in Game 6, the Giants have evened the best-of-seven series with the Cards at 3-all after being on the brink of elimination twice. Game 7 begins Monday night.

"We're 27 outs away from being in the World Series," Scutaro said. "For me, that is priceless."

San Francisco feels high right now, but the moments after Holliday smashed into Scutaro in Game 2 were tense for the Giants as he lay on the ground. Even after he got up, kept playing and contributed to San Francisco's first victory of the series, Scutaro left the game because of a sore left knee and hip. But he seems no worse for wear anymore.

"Even if it hurts tomorrow, I'll be there," Scutaro said.

His teammates have come to expect that.

"He's been playing like that all year," said Ryan Theriot, who would have played more in the second half, if Scutaro hadn't been so good. "[Third] most hits in the National League. He's been hitting like that, honestly. You'd have to ask him if [the slide] lit the fire a little bit. But really, he's been hitting since he got here." 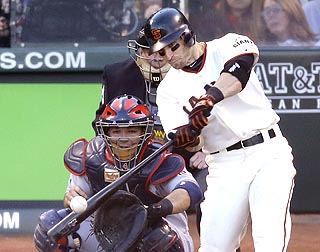 Scutaro's double to the left-field corner with two outs in the second inning gave the Giants a 3-0 lead. It probably was the most important hit of the game — not only for the offense, but also for right-hander Ryan Vogelsong.

"To have a cushion like that early definitely allows you to attack the plate a little bit more, especially with that offense they have over there," said Vogelsong, who produced one of the best starts of his career, allowing a run over seven innings with nine strikeouts.

"I'm glad I don't have to face him anymore," Vogelsong said. "I think a lot of the nation is finally getting to see the player that Marco is because of this postseason."

Giants manager Bruce Bochy said Scutaro is easier to appreciate if you watch him every day.

"And not just the talent, but what a smart player he is — on both sides," Bochy said. "He's had a great career."

Blocked by talented major leaguers in the Cleveland organization (where he started in 1997) Scutaro didn't reach the majors until age 26 with the Mets in 2002. He didn't play frequently until the Athletics at age 28, and didn't get an every day job at shortstop until going to the Blue Jays at age 33. He was down and up with the Red Sox in 2010 and 2011, and hit poorly (given the context of Coors Field) for the Rockies in 95 games this season before being rescued by San Francisco. He has played mostly second base (and some third) here.

Now 36, he sounds very appreciative of where the Giants are right now. And where they might go soon.

"I'm just trying to do my best to help my team and spend one more day with them," Scutaro said. "And tomorrow is Game 7. It doesn't get any better than that."

SAN FRANCISCO (AP) -- Ryan Vogelsong and these San Francisco Giants sure have become adept at saving their season. 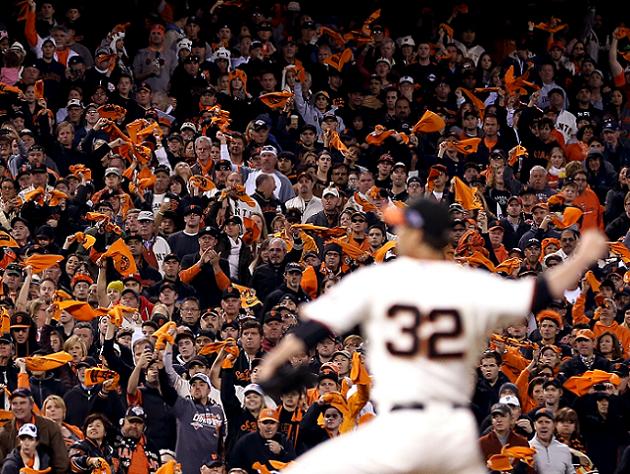 Score and situation: The NLCS matchup that seemed destined to go seven games will do just that after the San Francisco Giants locked up a 6-1 victory over the St. Louis Cardinals on Sunday night.

Leading lads: Ryan Vogelsong set the tone for the game by striking out the side in the first inning. He would settle in for another six strong innings, allowing only one run on four hits, while setting a career high — regular and postseason — with nine strikeouts. In all honesty, it was his most complete and dominant outing in 2012, and it obviously could not have come at a better time for San Francisco.

At the plate, Marco Scutaro continued his torrid postseason with his fifth two-hit game in the NLCS. He also scored two runs and knocked in two more with a two-out double in the second inning that extended the lead to 4-0. Pablo Sandoval then made it 5-0 with a run-scoring single and that was pretty much all she wrote for St. Louis.

Head hangers: Chris Carpenter didn't have it early on and the pivotal second inning unraveled on him so quickly that manager Mike Matheny had little choice but to ride it out. That ended up working out pretty well for St. Louis as Carpenter was able to finish out with two strong innings and conserve the bullpen a bit, but the damage was already done with Vogelsong dealing. In the end, Carpenter tossed four innings with five runs allowed, only two of which were earned. That matched his Game 2 totals in those three categories, and should St. Louis ultimately lose this series Carpenter's two disappointing starts could be viewed as the difference.

[Also: Matt Holliday's bad back scratches him from NLCS Game 6]

As indicated by the line, Carpenter's defense didn't help him out much. In the first inning, David Freese couldn't handle a ground ball clean enough to get a potential out at the plate. In the second, Pete Kozma botched Ryan Vogelsong's butcher boy grounder and was unable to record an out. That allowed one run to score and opened the door to a big four-run inning.

Key play: The error by Kozma put Carpenter and the Cardinals in a very tough spot. Had he at least been able to retire Vogelsong at first, it's possible, if not likely, the bleeding would have been stopped at one run. Instead, the inning continued beyond Angel Pagan's strikeout that followed, with Scutaro and Sandoval driving in the those three back-breaking unearned runs.

Interesting stat: According to ESPN's Jayson Stark, the Cardinals have allowed 12 unearned runs this postseason after allowing only 45 unearned runs during the entire regular season. That was the fewest for any team in baseball.

What they'll be talking about: The Giants resiliency shines through again as they won their fifth straight elimination game this postseason. They will put that streak on the line in the winner-take-all Game 7 against a Cardinals team that has won six straight elimination games over the past two postseasons. Something has to give on Monday night. Which side will it be?

What's next: Game 7 will take place at AT&T Park in San Francisco on Monday night and has a scheduled first pitch of 8:07 ET. The starting pitching matchup will feature a rematch from the low-scoring Game 3 with Kyle Lohse on the hill for St. Louis and Matt Cain taking the ball for San Francisco. The Cardinals won that night, 3-1.

It will be all hands on deck for both sides as Game 4 starters Tim Lincecum and Adam Wainwright will be available out of the bullpen. 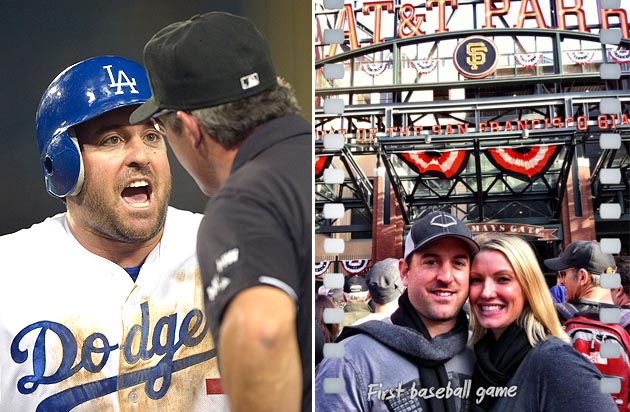 SAN FRANCISCO — It's a funny thing about being married to a Major League Baseball player. If you ever wanted to go on a date with your husband, and let's say you wanted to go to a game with him, well ... he's usually working. Besides, sitting in the stands for a game probably isn't the first "fun" thing that comes to mind after you've spent the past eight months in baseball stadiums.

However, in part because her husband has many former teammates playing in the NLCS, Natalie and Nick Punto acquired tickets and attended Game 6 at AT&T Park on Sunday night. Natalie Punto says it's their first baseball game together — in which he wasn't playing — in 13 years. Punto was a member of the St. Louis Cardinals' World Series team in 2011, producing one of his best offensive seasons (in limited at-bats) as a utility man. He finished this past season with the Dodgers, so rooting against the Giants probably comes naturally to him.

In fact, Punto tweeted a photo from his flight to the Bay Area, and if you notice the ring, it leaves no doubt for whom he is rooting (and roosting): 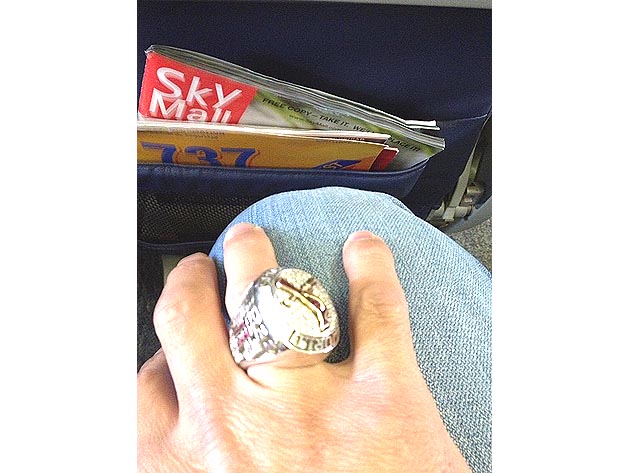 On my way to watch my ex mates take on our division rival twitter.com/Shredderpunto/…

Hey, be sure to read that seat-back card for instructions in case of a water landing.

Punto's nickname is "Shredder," in case you forgot or never realized. After cutting his teeth with the Phillies, Punto transitioned west where he became the ultimate Minnesota Twin. He was an Original Gangsta Piranha for Ron Gardenhire's bunch, terrorizing the White Sox and Tigers with his gritty play, his scrappy defense and his gritty and scrappy presence overall. He also married well, has three lovely children and isn't too jaded after all these years to enjoy a night with the wife at a ballgame. Good for the Puntos.

Outside the Game from Yahoo! Sports:

SAN FRANCISCO (AP) -- Left fielder Matt Holliday has been scratched from the St. Louis Cardinals' lineup because of lower back tightness just before Game 6 of the NL championship series against the San Francisco Giants.