Whoa, hey, wha-? Hakeem Nicks is OUT for Thursday night

by Andy Behrens in General 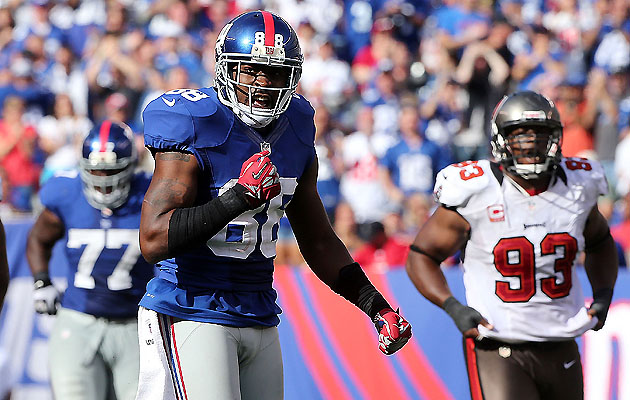 Nope, I'm afraid this is not a drill. The Giants announced on Wednesday that Hakeem Nicks did not make the trip to Carolina. He's been downgraded to "out," a status that really doesn't allow much room for hope.

Sorry, Nicks owners. I'm right there with you, scrambling for replacement options.

Victor Cruz was already a top-5 receiver on my board this week, so I can't very well give him a bump. Ramses Barden should get the greatest temporary boost in fantasy value, with Domenik Hixon (concussion) also sidelined. I've slotted Barden at No. 33 among the receivers for Week 3. He's a giant (6-foot-6), he had a nice preseason (just ask Charles Tillman), and he's playing plenty of snaps for New York.

Martellus Bennett is of course a strong play, too, a likely top-10 tight end. And we can't completely dismiss rookie wide receiver Rueben Randle, either.

Here are a few additional Nicks details, via the Star-Ledger:

Both Nicks and coach Tom Coughlin said Tuesday that Nicks would play this week. He did not practice Tuesday, which Coughlin said was a planned rest day. Nicks has been playing through pain in his foot, and that pain was aggravated in Sunday's game, when Bucs safety Mark Barron accidentally stepped on his injured foot.

Brutal, brutal news. Hopefully this is only a one-game inconvenience; it sounds like that's the case, but we obviously don't know just yet.

Running back Ahmad Bradshaw (neck) will miss the Thursday night game as well,with Andre Brown presumably taking the lead role in the Giants' backfield, ahead of David Wilson.

Read the rest at: Whoa, hey, wha-? Hakeem Nicks is OUT for Thursday night