Tim Tebow ‘hasn’t ruled out’ a future in politics 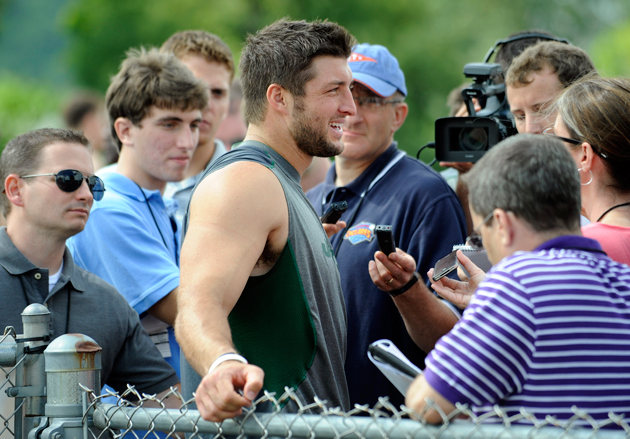 No matter what you think of New York Jets backup quarterback Tim Tebow, there's no doubt that his "Q" rating is as high as that of anyone in the NFL, and his reach with the American public has to do with a lot more than football. When a guy with a career completion percentage of 47.3 percent and 17 career passing touchdowns has this kind of hold on people, something is happening outside the game.

This fact has some speculating that after his NFL career is over, Tebow would be a perfect fit in politics -- it's believed that he could forward his personal beliefs in one of the few forums that has more of a global reach than the NFL. When ESPN New York's Rich Cimini asked Tebow about the possibility recently, the third-year quarterback said that it's not out of the question.

I haven't ruled it out. Whatever avenue I feel like I can make a difference in, I'd love to do. I haven't ruled out anything like that. It won't be anytime soon in my future, but it'll be something I'll at least look at and consider one day.

Tebow already has serious charitable interests -- his foundation does outreach work in America, the Philippines, Haiti and Bangladesh. The Philippines, where Tebow was born, is of special interest.

Cimini concluded his interview by asking Tebow what he'd like to do after the game is over for him.

Each party would love to have Tebow on its side. Several Republicans have praised Tebow's faith-based messages, and President Barack Obama recently called Tebow a "wonderful young man."

"He's got just a great winning attitude," Obama said in August. "He really steps up when things count, but there's going to be a lot of tension in that situation. So it'll be interesting to see how it plays out."

Obama also said that he wasn't in favor of a quarterback controversy ... and his advisers most likely told the Prez to clam up. The last thing he needs with a possible re-election coming up is to alienate the fan base of the one person in America who seems to transcend party lines.

And hey -- if former Michigan football star Gerald Ford can become president, who knows what we might see from Tebow down the road?

Other popular content on the Yahoo! network:
• How much did Magic Johnson pay for his share of the Dodgers? $50 million
• Video: Are these 3-0 college football teams for real?
• Manny Pacquiao, Juan Manuel Marquez both craving KO win in fourth meeting
• Y! TV: 'Modern Family' star's secret NFL past

Read the rest at: Tim Tebow ‘hasn’t ruled out’ a future in politics