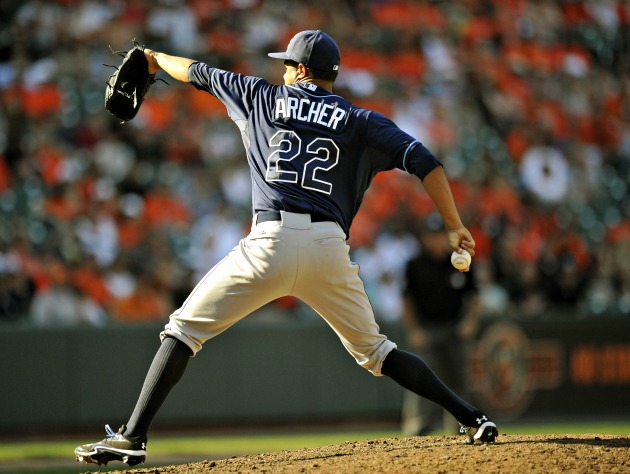 Starting pitchers in daily roto are like cell phones on The Wire. Use them up, chuck them out. Reduce, reuse, recycle.

Here's a look at the Wednesday slate.

It's surprising to see Archer available in 95 percent of Yahoo! leagues, as he offers several selling points. His strikeout clip jumps off the page, and he fanned 11 Rangers in his last spot turn. The catwalk will hide some mistakes, the Boston lineup isn't scaring anyone this late in the year, and Boston's opposing pitcher is Daisuke Matsuzaka. What else do you need to see? Make the add. … It's easy to put Hughes in the Circle of Trust, as four of his last five turns have been useful (heck, even the bad start had six strikeouts attached to it).

Better Than a Fresca
Lance Lynn vs. HOU
Marco Estrada at PIT

Lynn returned to the rotation in style, working six strong innings at Chavez Ravine (5 H, 1 R, 2 BB, 7 K). You wonder how deep he might go in this game given the recent bullpen work, and he is up against Houston's best starter, but nonetheless the Cardinals are heavy favorites here.

It's a shame Cahill and Volquez can't pitch this game where they'd like to: in San Diego. Cahill hasn't been comfortable in Arizona all year (5.10/1.49, nine homers, 5-7 record), and Volquez is even more of a horror show in his road starts (5.57/1.67, 49 walks against 70 punchouts). … McPherson has pretty relief numbers, but in a starting gig it's a complete crap shoot. … Lannan is a pitch-to-contact story (and that ugly K/BB rate worries you), but a 2.41 ERA and 1.18 WHIP through three starts (all wins) earns some cred. He's up against Josh Beckett, a favorable draw.

Saunders has been his usual mediocre self through four Baltimore starts (4.30/1.43, 14 strikeouts, eight walks). With all due respect to the power of Safeco, I'd prefer to wait for better spots, especially given Felix Hernandez on the other side.