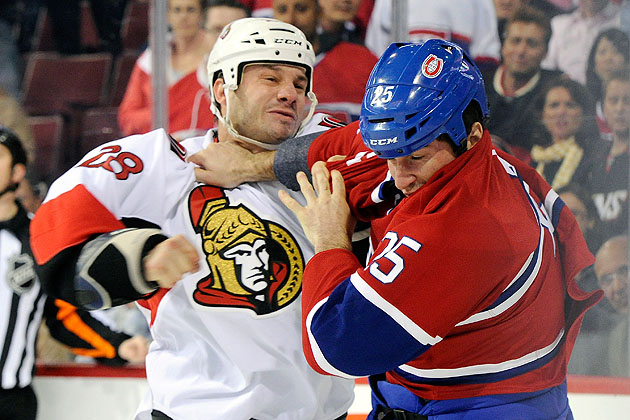 There were only two players in the National Hockey League last season that fought at least 20 times: Brandon Prust, then of the New York Rangers, and the Boston Bruins' Shawn Thornton.

In total, there were 18 players that fought more than 10 times last season, accounting for 265 fights. According to HockeyFights.com, there were 546 fights in the 2011-12 campaign. (Keep in mind some of the fights for the frequent pugilists were between each other.)

Point is, there's a group of NHL players that participate in a large percentage of the fights that occur each season, regularly dropping the gloves well into double digits.

For those would like to see the frequency of fights in the NHL — and especially the staged bouts between designated fighters — curtailed, the Ontario Hockey League and commissioner David Branch may have created a means to do so with a controversial new rule announced on Wednesday.

As Y! Sports' Buzzing The Net blogger Neate Sager reported on Wednesday morning, the OHL will suspend players that fight frequently, as 31 players had over 10 fighting majors last season.

One important caveat, via Loose Pucks: If there's an instigator on the other guy in a fight, then it won't count toward the other player's total. And "if player is deemed to be instigator in any of the fights above 10 game threshold, such player would be assessed automatic 4 game suspension." Which is a really, really shrewd restriction that speaks directly to the "honor in fighting" crowd.

Branch didn't speak about what happens after 20 fights, which is a shame because one of the driving forces behind this rule chance was Ty Bilcke of the Windsor Spitfires, who had 37(!) brawls last season. Which means, under these rules, he would have been suspended 20 games and his team fined $5,000. Again, in theory.

In reality, these new rules are intended to curb fighting. Now, frequent fighters are going to have to be more selective or else face suspension. The OHL is going to have a bunch of bloodthirsty pugilists contemplating whether the guy they want to pummel is worthy of the sacrifice.

In other words, before they drop the gloves they'll have to wonder, "Do I really want this guy in my 10?"

It's like the hockey version of the "sponge-worthy" episode of "Seinfeld."

(Y! Sports Junior Hockey Editor Sunaya Sapurji brings up another fallout from this rule: "So if I'm at 10 fights and you have less and we're gonna go... all you'd have to do is instigate me and I'm safe.")

TSN's Darren Dreger indicated that the NHL will watch this rule's development closely, and why not? They've been vocal about limiting some forms of fighting — like the Devils/Rangers brawls off the faceoff and other staged events — so the idea of curtailing the frequency of their most recurrent fighters seems to fit in that philosophy.

"They talk to us when they make rule changes like this," Campbell told ESPN.com Wednesday. "We've discussed the aspect of fighting over the years. We had a couple of initial discussions about this last spring. They were thinking about implementing some sort of quota. I mentioned to him we had debated that internally in Hockey Operations at the NHL level."

Plus, let's face it: When the NFL is getting sued off its arse over concussions and the NY Times is writing about player safety in hockey on what seems like a weekly basis, it would behoove the NHL to appear as proactive as possible in limiting fighting.

One imagines the NHL would look at a similar range of punishments as the OHL, although it wouldn't surprise us to see that 10-15 games bracket turned into a 1-game suspension with a fine for the team. Then the penalties would escalate after 15 fights. (Again, in theory.) The number of players with 15 or more fighting majors has dropped from 18 to 11 to 9 in the last three seasons.

Question is, does the NHL really need OHL-like regulations on frequent fighters, or is a reduction in fighting already occurring?

I've long said that the culture of the NHL will dictate fighting's place in that game. It's now declined for four straight seasons. The heavyweights aren't peppering every roster anymore because many of them have been skated out of the League, thanks to the NHL 2.0 rules' emphasis on speed. And the remaining behemoths, like John Scott, are finding a lighter dance card every season -- too many "gutless pukes" and not enough opponents.

Branch's endgame, as Sager put it, seems to be the "outright removing fighting from junior hockey."

The NHL has no desire to eradicate fighting; question is, does it have enough of a desire to curtail it to implement suspensions and fines for players who fight too often?

Read the rest at: Should the NHL adopt OHL’s new rules that target fighting leaders?