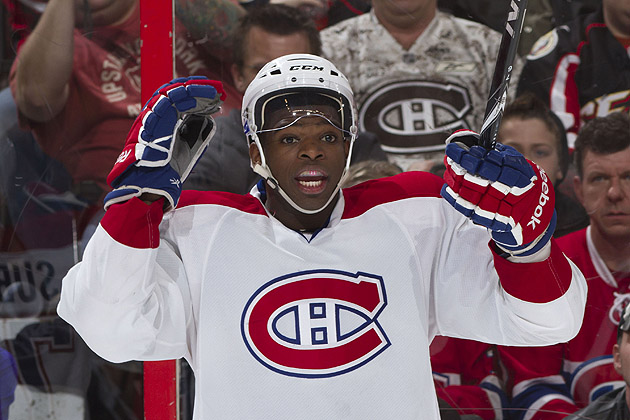 Do the Philadelphia Flyers covet defenseman PK Subban as a long-term solution to their blueline problems? According to a report from Bertrand Raymond of RDS, apparently they do. Or at least they did.

As the story goes, the Flyers inquired about Subban, a 23-year-old restricted free agent, after the Nashville Predators matched the 14-year, $110-million offer sheet Philly handed to Shea Weber this summer.

So it would instead be a trade for the Flyers and Canadiens for Subban, and Raymond had an idea of what the ante might be to convince GM Mark Bergevin to deal him.

So back to the Canadiens-Flyers discussions. During the interview between Bergevin and his counterpart Paul Holmgren, one of the names mentioned was obviously the young sensation Sean Couturier, the first round pick of the Flyers two years ago, which has shown great things after winning one position 18. It is said that one who most insisted that the name be removed from the Couturier discussion coach Peter Laviolette who sees in his soup. This has not been a problem since Couturier believes that is closely linked to the future of the Flyers.

As we translate the translation: Lavy witnessed Courtuier put up 27 points as a rookie and shut down Evgeni Malkin in the playoffs. So that's probably a non-starter. (Also, knowing Laviolette, the only thing he sees in his soup is his own tie.)

We imagine the "hey, we're interested in trading for PK Subban" thing was a non-starter in the first place.

The tone of the RDS piece hints at continued interest, but it's clear that most of the Flyers' overtures were in the wake of the Weber ordeal, which went down in July.

Far be it from us to be suspicious of news leaked to French-language media about Subban being on the block during the final stages of his contract negotiation with the Canadiens … but we are.

So, despite the fact that PK Subban in a Philadelphia Flyers uniform would break the needle on the Swagger-Meter, it's probably just a tire kicking during the summer.