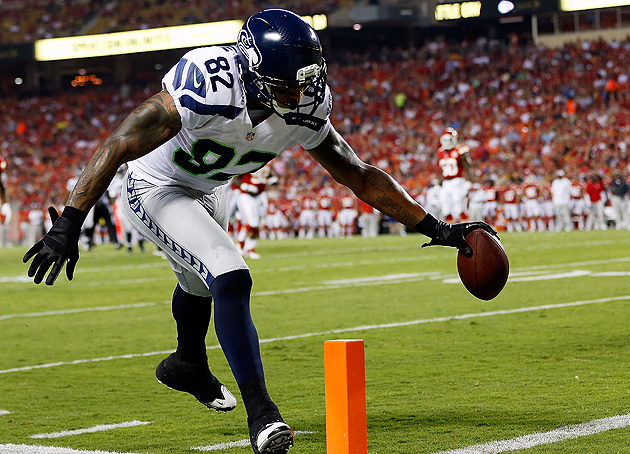 The New England Patriots lost a key part of their passing game when tight end Aaron Hernandez suffered a right ankle injury in the Pats' 20-18 Sunday loss to the Arizona Cardinals. Hernandez, who had caught eight passes for 59 yards this season, is expected to miss at least a month.

To replace Hernandez on the roster, New England has reportedly agreed to terms on a one-year deal with veteran tight end Kellen Winslow, who was released by the Seattle Seahawks on Sept. 2 in a surprise move. In 2011, Winslow caught 75 passes for 763 yards and two touchdowns for the Tampa Bay Buccaneers, while Hernandez grabbed 79 passes for 910 yards and seven touchdowns for New England. Winslow visited the Pats soon after his release from Seattle.

Winslow, who played 16 games in each of three seasons for Tampa Bay despite several knee injuries, had to be limited in practice and caught just three passes for 34 yards and a touchdown in the preseason for Seattle, but he looked dynamic when he could go.

"He has an extraordinary catching range," Seahawks head coach Pete Carroll said of Winslow in May, soon after the Seahawks traded a conditional late-round pick to the Bucs for his services. "He is doing a great job for us going with us right now. He's affected the way we think about the throwing game, and he's affected the quarterbacks too because you can feel when he's on the field. If you throw it near him he's going to catch it. That's that factor I'm talking about, it can happen with wide receivers. That's why I was so excited about Kellen coming in. That catching range, that expertise that some rare guys have, you want it when you can get it. I just want a little bit more."

Winslow was frequently set as a multi-spot target for the Seahawks, and there's no doubt he'll be tasked to do the same in a Patriots offense that uses tight ends more than just about any other in the NFL. Per Football Outsiders, New England ran offensive sets with two or more tight ends 74 percent of the time in 2011, which led the league.

Hernandez is generally set out wide or in the slot, while teammate Rob Gronkowski is generally closer to the formation. In 2011, Hernandez lined up 123 times as a pure receiver -- away from the formation, and not even in the flex or slot position. Only Green Bay's Jermichael Finley did so more often. Winslow is used to Hernandez's role, and if he is fully healthy, this could be a great spackle move for an offense in need of reliable targets.

The Patriots signed Hernandez, a fourth-round pick in the 2010 NFL draft, to a lucrative contract extension.