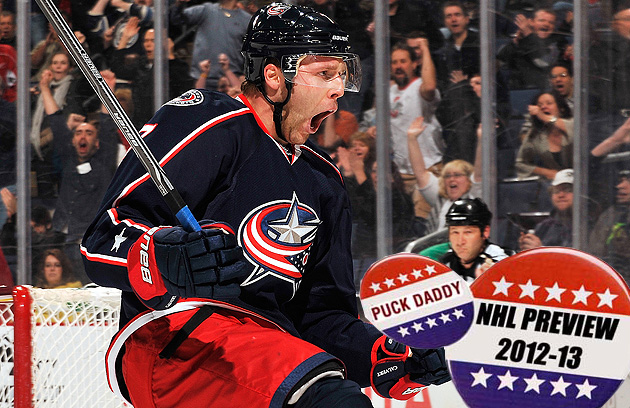 Yes, indeed, despite the promise of impending labor Armageddon and a prolonged work-stoppage, your friends at Puck Daddy are previewing the 2012-13 NHL season (whenever the heck it starts). Why? Because this is the most important election in the history of all-time ever, and you need to know the candidates — like the Columbus Blue Jackets.

Yeah, so, that happened.

The Blue Jackets entered the season with high expectations after a significant offseason investment: Trading for Jeff Carter from the Philadelphia Flyers and signing free-agent defenseman James Wisniewski to a six-year, $33 million deal. Within the first five games of the season, Wisniewski was in the midst of a 8-game suspension and Carter had broken his foot.

There was constant talk that former coach Ken Hitchcock would replace Scott Arniel; instead, Hitchcock took over the St. Louis Blues (to incredible success) and Arniel was fired after a 11—25—5 record last season. Assistant coach Todd Richards took over, but the season was too far gone.

Then things got really interesting: The team announced it would listen to trade proposals for captain Rick Nash, which was later revealed to be a trade request from Nash during a defiant post-trade deadline press conference from GM Scott Howson.

He finally traded Nash during the summer to the New York Rangers, getting back a return that many felt was unworthy of a player of Nash's caliber.

Carter, a disaster, was eventually traded to the Los Angeles Kings for Jack Johnson. He later won the Stanley Cup.

Also, the Blue Jackets, despite being the most terrible team in the NHL, lost the Draft Lottery and the chance to take Nail Yakupov.

The Nash trade obviously reshapes the Blue Jackets' roster significantly with the additions of C Brandon Dubinsky, C Artem Anisimov and D Tim Erixon — as well as the deletion of Nash, by far the team's most potent goal-scorer, from the roster.

The other big move: The acquisition of Sergei Bobrovsky of the Philadelphia Flyers for picks, giving Steve Mason some competition. Or someone to play behind. Or another enigma between the pipes.

The Jackets also traded defenseman Marc Methot to Ottawa for Nick Foligno, signing him to a new 3-year deal.

On the free-agent front, Adrian Aucoin joins the Jackets' blueline for one year at $2 million after coming over from the Coyotes. Defenseman Aaron Johnson left for Boston, while Kristian Huselius left for Europe — and looked back in anger.

At forward … well, at the very least, the Jackets will be a pain in the ass to compete against.

For example: If Richards wanted to roll a top line of R.J. Umberger with former Rangers linemates Brandon Dubinsky and Artem Anisimov, he'd have three players who could hound the puck in the attacking zone — and in Dubinsky, a player that'll visit the sin bin to the tune of 100 penalty minutes.

Foligno can be a pain to play against. Ditto Derek Dorsett and Jared Boll and Derek MacKenzie. It's going to have the pugnacious tenacity that someone like Brian Burke would covet … alas, it might also have the offensive depth of some of his Leafs teams.

Where are the goals coming from? Dubinsky's best offensive season was 24 goals. Vinny Prospal had 55 points last season but turns 38 next February. Cam Atkinson had 14 points in 27 games, but the operative phrase there is "27 games." Ditto promising center Ryan Johansen, who had 21 points in 67 games as a rookie. And can you believe Derick Brassard is somehow still on this team?

On defense … things are a bit more settled.

Wisniewski and Jack Johnson should form the team's top pairing, despite not fitting into the usual offense/defense paradigm. Wisniewski (24:47 TOI) had 27 points in 48 games in a truncated season. Johnson, acquired for Carter last season, had 14 points in his 21 games with the Jackets.

Fedor Tyutin was second on the Jackets in total ice time (24:08) and led them shorthanded (2:49). After some talk he could be on the block, he signed a 6-year extension with the Jackets. Nikita Nikitin, acquire from the Blues for Kris Russell and a revelation last season, should be back as his defense partner.

That leaves veteran Adrian Aucoin on the final pairing, where the Jackets will spin the wheel of partners: John Moore, Ryan Murray or David Savard, who might have the advantage.

In goal … Scott Howson believed in Steve Mason last season, and he ended up being one of the primary factors in the team's demise: 3.39 GAA, an .894 save percentage and supplanted by Curtis Sanford at times as the starter. Now it's Bobrovsky with a chance to either share the burden to steal the job. He followed an outstanding rookie season (2.59 GAA, .915 save percentage) with one in which he couldn't find a groove playing behind Ilya Bryzgalov. Is a change in scenery the solution?

"These Teams Are On My List" by Rick Nash, a reminder of the number of places he would have rather been than Columbus.

Stability is in short order in Columbus, so the elevation of Richards from interim to head coach can be viewed as a positive through that prism. It's his second whack at the piñata after serving as head coach in Minnesota. He lost the room with the Wild; it's hard to imagine a similar power struggle in Columbus.

There's a Fire Scott Howson Facebook page. That it's request has yet to come to fruition remains startling given the team's fortunes and the failure of some of his high-profile moves (Carter, re-signing Mason, the Nash debacle). But there he is, trying to once again rebuild a team that's made the playoffs once in franchise history.

We'll go with Johnson, who assumed a leadership role on the team last season and could be in line to be its captain. They need more offense out of him, especially on the power play (an underwhelming 15.5 percent conversion rate). But if he isn't already, he will be the face of the franchise.

Was five goals and five helpers in the last six games of last season an anomaly, or does Cam Atkinson have the goods to solidify the team's second line next season? His 2.4 shots per game was third on the team.

Hold your nose and pick either goaltender: Mason because this category should probably be named after him at this point, and Bob because one simply doesn't know what he looks like away from having the Flyers in front of him.

"The Columbus Blue Jackets claim they care about our children. But what kind of a hockey organization pledges its support to defend gangster rap …

… and has male genitalia as a mascot? 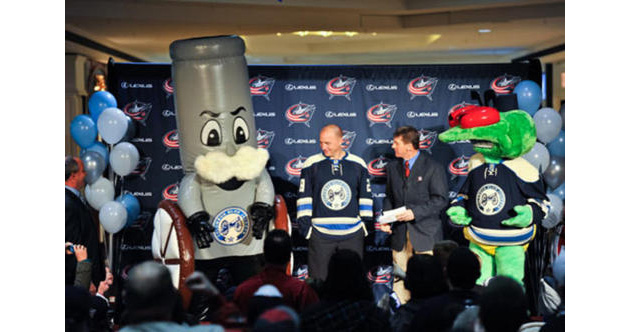 "The Columbus Blue Jackets. Not a hockey team. A corrupting force of thuggery and deviancy. Paid for by the Cleveland Barons Preservation Society."

In the last year, the Jackets fired a coach, traded a star center, traded their franchise player, finished last and lost the draft lottery. Oh, and they secured the 2013 NHL All-Star Game. You know, the one that'll probably be cancelled.

Rebuild might be putting it kindly. But there are some pieces in place on defense; and like we said, it could be a tenacious group up front.

Are they the worst team in the conference on paper? Probably. Will they be a pushover? They'll compete every night.