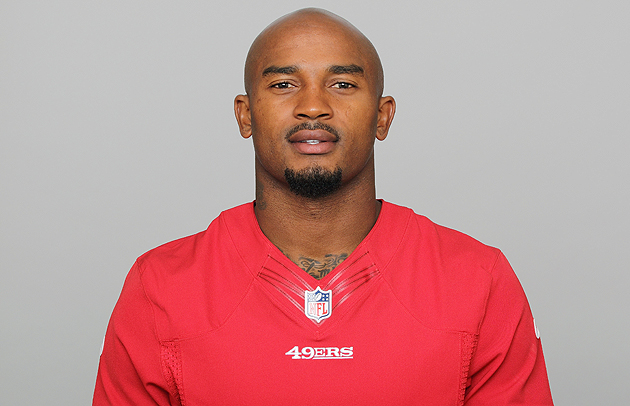 During the San Francisco 49ers' 27-19 win over the Detroit Lions on Sunday night, 49ers cornerback Tarell Brown started at right cornerback, made four tackles in 65 snaps (100 percent of the 49ers' total) and played six additional snaps on special teams. Brown also wore red sleeves under his uniform, which is a violation of Rule 5, Section 4, Article 5(a) of the 2012 Official Playing Rules of the National Football League, and has been fined $5,250.

Brown himself broke the news of his fine, posting an image of the fine letter he received from the National Football League to Twitter. Brown has since deleted that tweet, but it lives on courtesy of Matt Maiocco of CSN Bay Area. The image also included a URL, fine number and PIN number for Brown to access a secure NFL site that allows players to review why they're being fined and to submit an appeal.

Just in case Brown thinks the NFL is picking on him, 49ers quarterback Alex Smith has been informed that if he ever dares to wear a San Francisco Giants cap during a postgame press conference again, he will be fined $15,000. So, there's that.

"So it's weird," Smith said of the NFL's rule stating that players must wear sponsored gear 90 minutes after every game. "I could wear a Polo shirt after the game and they're not going to fine me."

While some may and will argue that this is just another example of the NFL being the "No Fun League," the players do wear a uniform and all teams, as evidenced in the letter Brown received, have a designated undergarment color. Since this is Brown's sixth season in the National Football League, he probably knows that the NFL has a uniform policy and has been kind of a stickler about enforcing it, placing officials outside each team's locker room for random inspections.

Since this is also Brown's sixth season with the 49ers, chances are good that Sunday night was not the first time he had to dress himself before a home game and knew which color undergarment the 49ers were designated to wear. The foolproof ways to have avoided a fine was to either go sleeveless or white sleeves like the rest of his teammates.

Chicago Bears wide receiver Earl Bennett racked up $10,000 in fines for violating the league's uniform policy in back-to-back games, but was told he would not be allowed on the field for an attempted third violation. (Side note: Fine amounts rose by 5 percent from 2011 to 2012.)

Other popular content on the Yahoo! network:
• Video: Are replacement refs endangering players?
• Fantasy Baseball: Cardinals' Lance Lynn is pitcher of the week
• Michelle Obama tries to ‘Gator Chomp’ her way into the University of Florida’s heart
• Y! TV: 'Saved by the Bell's' Mr. Belding now a pro wrestler