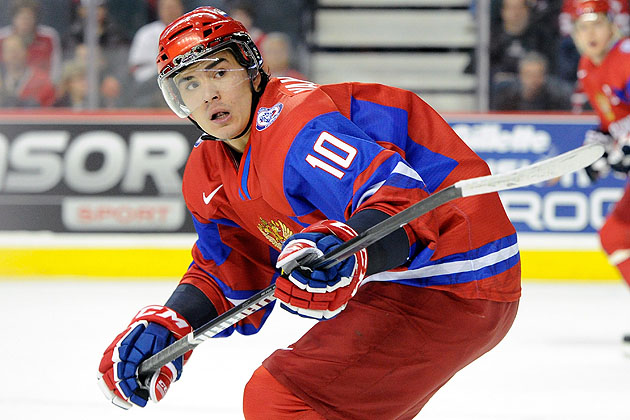 As the NHL locked out its players, Nail Yakupov, taken first overall in the 2012 NHL Draft by the Edmonton Oilers, flew back to his home town of Nizhnekamsk and agreed to a contract with the local KHL team, Neftekhimik.

He was scheduled to be in the starting lineup in Neftekhimik's next game in Nizhni Novgorod. But that's likely not going to happen, because the IIHF is refusing to issue Yakupov's transfer card to the KHL club.

It's something that could affect other NHL players trying to spend the lockout in Europe.

An IIHF transfer card is needed for any player participating in any tournament under the IIHF umbrella. It is sort of a permit to play. The KHL and every hockey league in Europe is under the IIHF umbrella. The KHL had its run-ins with the international hockey governing body before, when the IIHF either refused or delayed issuing transfer cards, like in the case with Alex Radulov. On certain occasions, these tensions led to KHL threatening to leave the organization.

"The IIHF is not allowing Yakupov to play. The transfer card has not been sent from Switzerland (the IIHF headquarters)," Neftekhimik director Rafik Yakubov told Sovetsky Sport's Pavel Lysenkov.

"I can't even imagine what this is related to. Perhaps the international hockey federation doesn't want to feud with the NHL and is waiting when they receive an approval from there. The negotiations are ongoing and we were told that there will be no requests. So, Nail cannot play against Torpedo. He is already in Nizhnekamsk, practicing with the team and is ready to play even tomorrow."

Lysenkov is reporting that Igor Larionov, Yakupov's agent, had an agreement in place with the Edmonton Oilers to allow Yakupov to play in the KHL for the duration of the lockout.

But now Yakupov has to wait.

The NHL is not a member of the IIHF, but has a great deal of power bossing the international governing body around. Rene Fasel rarely goes against NHL's wishes, and it is not surprising the IIHF is possibly waiting for NHL's official permission to issue transfer cards to NHL players allowing them to play in Europe during the lockout.

No one will officially confirm this within the IIHF, but it is possibly the case that this is yet another way the NHL can stop players from playing altogether. The IIHF's leadership is weak to make independent decisions.

(Asked how much of a role NHL plays in IIHF decision on transfer cards, NHL deputy commissioner Bill Daly said in an e-mail to Yahoo! Sports: "None, either directly or indirectly.")

The large scale of the IIHF's ineptness is that apparently Yakupov is not the only one without the transfer card. Czech media outlets are reporting that none (!) of the NHL players who have signed deals in Europe in the last few days have received their transfer cards. Not Jaromir Jagr nor Evgeni Malkin nor Sergei Gonchar nor Ilya Kovalchuk. We are awaiting confirmation of this, as the time difference with Europe is such that it is tough to get answers.

But again, this whole story is not surprising. The IIHF does not want to get into a feud with the NHL even though, as I mentioned, the NHL is not related to the IIHF in any way.

UPDATE: Szymon Szemberg of the IIHF provided the following information in the hopes of clarifying the process and explaining some of the delays:

Whenever a club has signed a player to personal contract, the club that has recruited the player must start the international transfer card (ITC) procedure. Most likely, a professional club either has a card in the club office or acquires one from its national federation.

The IIHF never stalls or delays any transfers. As soon as it has the three approvals, the player is good to go.

Example: When Atlant Mytishi wants to recruit Andreas Engqvist from the Montreal Canadiens, they take the ITC card and have the player and the Russian hockey federation sign it. After that they send it to Hockey Canada (as Montreal is in Canada) and HC checks with NHL Central Registry about the player's contractual status. If the player is not under a valid and binding contract, NHL CR gives HC the OK to sign the ITC. HC, if it is time pressure, scans the ITC and e-mails it as an attachment to the IIHF.

The very second the ITC arrives at the IIHF with all three signatures, the IIHF informs RHF/KHL/Atlant that the player is eligible to play. So the IIHF is never in a position to stall or delay anything.

So when Yakupov left for the CHL it was the other way around; Sarnia started the ITC process and Neftekhimik/Russian HF were given seven days to sign the ITC.