by Andy Behrens in General 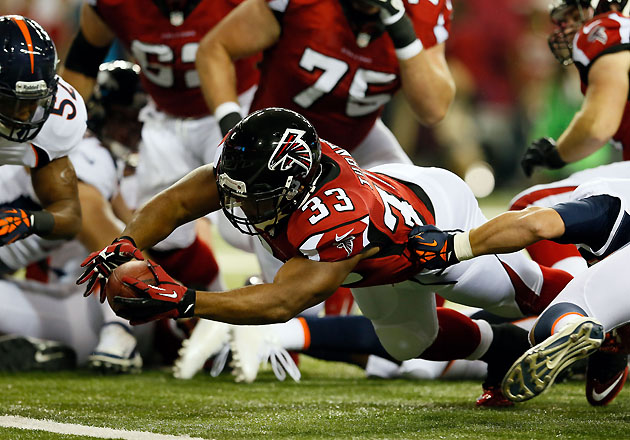 Falcons running back Michael Turner gained 42 yards — most of them ugly — on 17 carries, and he punched in an early one-yard score. Then, a few hours later, Turner apparently decided to celebrate his 10-point fantasy night. He was reportedly arrested early Tuesday morning, charged with speeding and DUI, and released around 7 am. So his season is not off to a great start.

(This is where I'm tempted to make a joke about Turner failing his field sobriety test because he can't walk more than two yards without falling. But maybe that's inappropriate, considering the seriousness of the charge. Thus, I'm gonna go with the parenthetical aside.)

There's no immediate suspension threat here, we believe, so the fantasy impact is minimal. The greater worry facing Turner owners is that Atlanta's ground game has been pathetic, and not just when the Burner has the ball in his hands. Jacquizz Rodgers has only gained 25 yards on 10 carries (2.5 YPC). Turner has 74 on 28 (2.6). For Jason Snelling, it's seven yards on three attempts (2.3). Not great.

And the Chargers are up next, a team that's allowed just 83 total rushing yards over two games.

Turner still owns the goal line role for the Falcons, the key to his ongoing fantasy relevance. He broke off a 15-yard clock-killing run on his final carry on Monday, making his final stats seem less terrible.

I'll remind you of Turner's advice to fantasy owners following his 32-yard performance in Atlanta's opener...

"Not after one game," Turner said when asked if fans should be concerned with his production. "If it's a couple weeks down the road and I'm still looking like that, then trade me off your fantasy team."

He's obviously not familiar with the sell-high concept.

Read the rest at: Michael Turner charged with DUI after Monday night win