Many voices, one man: The NFL remembers Steve Sabol 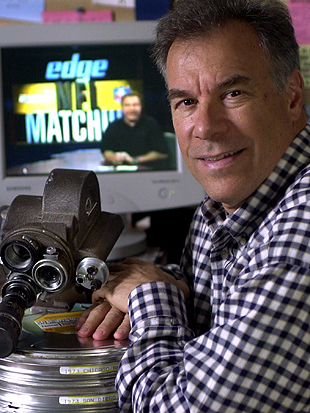 The NFL lost a legend on Tuesday with the passing of Steve Sabol, the Emmy Award-winning president of NFL Films who battled brain cancer over the last 18 months. Sabol was a central figure in how we all — fans, players, coaches — came to see the National Football League.

Sabol co-founded NFL Films, working as a cameraman and writer before eventually taking over "the family business" from Ed Sabol, his Hall of Fame father.

As the NFL mourned his passing, those who knew and worked with Sabol reflected on his life, his work, and his impact on the game he loved.

"When you walk around the NFL Films library, I call it a working museum because each picture on the wall has a Steve Sabol symbolic memory to it. He put each picture there and every day you're reminded of his genius, his talent, his unbelievable passion for football. I would love passing him in the halls and we would stop and have a five-minute conversation about the history of the league, comparing an old player to a new player. He was just an amazing mind in terms of football and a creative genius. Every day when I walk into that office, I take a picture and try to post it on Twitter because they're unique; they're situated in a setting that he wanted them to be situated in. It's a huge loss for all of us in the NFL family because he was truly part of the creative process that made this league so great." — Michael Lombardi, NFL Network

"Steve had amazing passion for the game of football and everything he did at NFL Films reflected positively on the coaches, players and administrators of the National Football League. For the last 22 years, Steve has been a great inspiration to me and was instrumental in my development as an NFL analyst. I will never forget how positively he impacted every person he came in contact with, not just in the football world. You would be hard pressed to find a single person that would have a negative word about Steve." — Ron Jaworski, former NFL quarterback who has worked as an NFL analyst for ESPN and has worked out of the NFL Films offices for years.

"I think I could speak for a lot of coaches, and we all sort of went through the same thing with Steve. I'll never forget the first time that I got asked by Steve to be wired as the head coach of the 49ers. I was very reluctant to do that; I had never been wired before. I said, 'OK I'll do it but I don't want the team to know that I'm wired, let's keep this secret.' He said we have you covered. I was wired up before the game in a private room, the cameras were never close to me; they were on the other side of the field. He said to me just be yourself; don't even think about us, coach the game and then we'll take the wires off when it's all over with. You know how emotions fly during the game and I probably did some things or said some things that I didn't want aired. I remember calling him the next day and said you have to do me a favor, I think I might have cursed or something like that on the sideline; can you not air that please? He said, 'Coach, remember we are not here to make you look bad, you're going to have to trust us; we're here to promote your team, to promote the National Football League and you can trust that we will always, always be on your side and make you look as good as possible. We'll have some fun with this.'…He became like a brother that way; you trusted him so much. Every coach trusts him and NFL Films and that's a general statement around the league. Players and coaches trusted that they would always do the right thing and make you look good." -- Steve Mariucci, former NFL head coach and current NFL Network analyst

"Totally revolutionized it. I am sure he would say if you had to pick one — a kind of turning point — the way they [NFL Films] documented the Ice Bowl game between the Packers and the Cowboys was just perfect with John Facenda's voice. Because the game did have an epic quality to it; it wasn't an exaggeration. It was a game of such high drama and had a certain mythic aspect to it to begin with. Then they heightened it and captured it and that was that the turning point.

Football can be kind of serious, of course a violent, sport and has sort of a whole different atmosphere around it. NFL Films always made a point to find the humor in it, the goofiness in it, the blooper reels, the little asides from someone who was mic'd on the sidelines tosses off. It was just really funny in the heat of battle. They humanized it by sometimes taking it down from Mt. Olympus and just making it funny." — Bob Costas

"Young kids in this business, we really need to understand the impact that Steve Sabol had. We lost a great pioneer a few days ago in Art Modell; now we lose another one. These men had a vision to do something great, and the beautiful thing about what they were doing, it wasn't for them. They had a vision to expand; to expand our league, to expand our game, to expand our brand. I promise you one thing they will always be remembered by is their great name…Steve Sabol's name, we will not be able to mention NFL or NFL Films without Steve Sabol's name…He was one of those people that we have to learn from; we have to research what pushed him, what pushed him to the edge to say, 'This is what I want to do and this is how I want to expand' because his vision was incredible." -- Baltimore Ravens linebacker Ray Lewis

"I am deeply saddened by the passing of my friend Steve Sabol. Every time I saw him, he brought a quick smile to my face. He was happy everyday on the job for a simple reason — Steve was a man who loved pro football and loved making movies about it. He and NFL Films have long been unparalleled in their craft and for that reason millions of us will forever owe Steve a huge thank you." — Chris Berman, ESPN

The Sabol family has requested that any donations be sent to the Jefferson Foundation for Brain Tumor Research, c/o Lindsey Walker, 925 Chestnut Street, Suite 110, Philadelphia, PA 19107.

Read the rest at: Many voices, one man: The NFL remembers Steve Sabol