Dwight Howard explains Orlando Magic contract fiasco: ‘I wanted everybody to love me’ 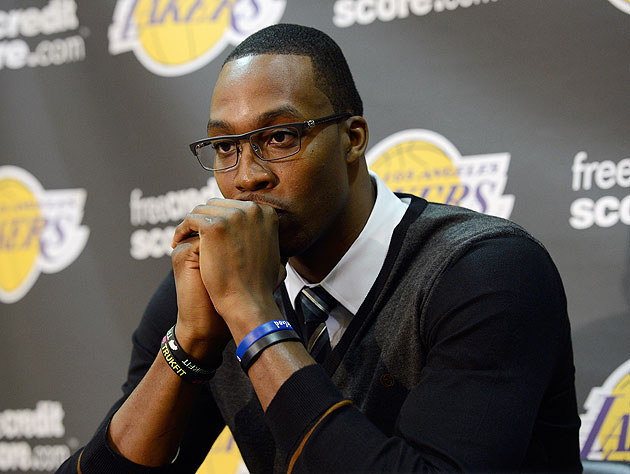 Dwight Howard won't be back to live NBA action for a bit, as he'll miss the beginning of training camp and the start of the preseason while continuing to strengthen his lower back following April surgery to repair the herniated disk that ended his 2011-12 campaign. When he does come back, though, he'll be wearing the purple and gold of the Los Angeles Lakers, thanks to a four-team megadeal that made the Lakers a championship favorite and consigned the Orlando Magic to the ranks of the rebuilding.

The trade ended Howard's protracted and indelicate attempts to exit Orlando, a months-long tire fire in which Howard repeatedly made decisions that seemed to anger and disgust not only Magic fans, but just about everyone following the fiasco. This, it appears, was not his intention.

In an interview with ESPN.com's Ric Bucher filmed for the network's regularly televised "Sunday Conversation" segment, Howard said he doesn't "have any regrets" about the way things transpired (which makes sense, because after it all, he wound up moving from Orlando to Hollywood, playing alongside Hall of Fame talent and putting himself in position to again contend for a title) except for a wish that "some of the lies and some of the things being said didn't come out the way [they] did" (which makes sense, because Dwight definitely didn't want the whole "I secretly asked management to fire my coach" thing to come out the way it did).

No regrets, then, but some valuable wisdom gleaned:

"That's one of the lessons that I learned, you know. I can't make everybody happy," Howard told Bucher.

While trying to decide how to handle his business, a lot of conflicting thoughts and images kept running through Howard's mind, including the epic backlash that followed "The Decision."

"And it was a tug of war between my feelings and the fans and everybody else and their feelings and what happened to LeBron. And I saw him — everybody hated him for leaving Cleveland and what he did," Howard said of LeBron James' free-agent move from the Cleveland Cavaliers to the Miami Heat in 2010. "I never wanted anybody to hate me, you know. I wanted everybody to love me, you know, like me, for sticking around and doing what they wanted me to do. And making everybody else happy. And that was a valuable lesson for me, you know.

"I can't make everybody happy."

This is well-trodden territory, but still, for the sake of clarity, it's worth noting that while James earned whatever scorn he received for making a public spectacle of rejecting a fan base in the summer of 2010, he was 100 percent within his rights to pick whichever team he wanted to play for, because he had come to the end of his deal with the Cavaliers and was a free agent. Howard tried to work his escape plan while still under contract with the Magic. So, yeah. People got pissed.

That said, it's easy to understand why Howard might've gotten shook behind what happened to James, who went from being the NBA's golden child to someone whose jersey people were burning in effigy and the sport's most hated individual overnight. That seemed like a pretty rough deal; after all, nobody likes to be hated. (Well, except Kobe Bryant, maybe.)

However, this doesn't seem entirely accurate — most of the actions Howard took beginning in December, just after the end of the 2011 NBA lockout, when he reportedly demanded to be traded to the then-New Jersey Nets, seemed pretty clearly aimed at making Dwight happy, irrespective of how anybody else felt about it. In the months that followed Howard's trade demands, the six-time All-Star and three-time Defensive Player of the Year burned through every ounce of goodwill he'd built up with Magic fans since the team drafted him in 2004, creating a strained environment by continuing to push for a move even as the Magic established themselves as a clear No. 3 behind the Chicago Bulls and Miami Heat in the Eastern Conference prior to the trade deadline.

But then, just before the March 15 deadline, Howard did make a decision that seemed predicated on not wanting people to hate him, choosing to opt into the final year of his contract. But even as he presented that choice as a symbol of his loyalty to the franchise, he continued to decline to ink a long-term extension and leave the door open to exiting after the '12-13 season, which didn't do much to assuage concerns that he wanted to bolt.

Less than a month later, Magic coach Stan Van Gundy was telling reporters that he knew Howard had called for his firing, to which Howard said, "Yeah, but not recently." The atmosphere surrounding the team grew increasingly chaotic and the on-court product suffered, with the Magic going through an ugly 2-7 stretch that saw them drop in the East's standings before losing Howard to the back injury and bowing out in the first round of the playoffs to the Indiana Pacers. After the playoff ouster, Howard finally got his reputed wish, as the Magic jettisoned both Van Gundy and general manager Otis Smith, but he continued to press his trade demand, further alienating the remaining diehards who still supported him. If all that wasn't enough, Howard postponing and then canceling an appearance at his own basketball camp for Orlando youth was probably the nail in the coffin of "Dwight Howard: Person Who Is Not Hated In Central Florida." (The people of Orlando didn't seem particularly moved by Howard's too-little, too-late "thank you" newspaper ad.)

Now, though, it's September, and all parties involved have moved on. Howard's trying to get healthy and prepared to join Kobe, Steve Nash, Pau Gasol and company in L.A. Van Gundy's dropping science on podcasts and reportedly getting set to join ESPN's NBA studio show. Otis Smith's getting inducted into the Florida Association of Basketball Court of Legends, which sounds nice. And the Magic ... well, um, the Magic'll be scrappy, and Hedo Turkoglu's contract only runs two more years. Training camps start in just two weeks, so it's time for everyone involved to put this in their rear-view mirrors.

That's especially true for Howard, who we can only hope has actually absorbed the lessons he claims to have learned. I think most of us would like to see "I can't make everybody happy" joined by "I should do what I believe is right, even when it's unpopular" and "It's best to be honest and honorable, even in difficult situations," but realizing that trying to please everyone all the time is a fool's errand is no small bit of personal growth for a 26-year-old. It's just a shame it took about eight months of dragging Orlando fans through the muck for Dwight to get there.

Read the rest at: Dwight Howard explains Orlando Magic contract fiasco: ‘I wanted everybody to love me’