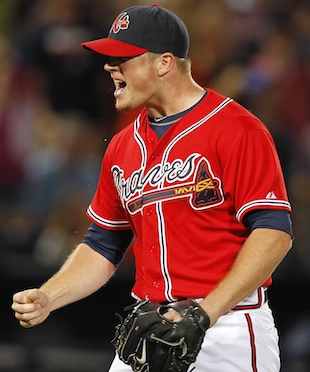 The Atlanta Braves are the proud owners of a 84-63 record and a sizable lead over the gaggle of teams vying for the National League's second wild-card spot.

While such an entrenched wild-card position would have rewarded them with an easy path to a spot in a playoff series in the past, the expanded playoff system is gifting Fredi Gonzalez with a unique booby prize: The ability to stage a long debate on how the pitching staff should be treated for that one play-in game come Oct. 5.

Indeed, it's an intriguing situation. While Oakland is in a similar position of strength in the AL wild-card race, the A's are also just three games behind the Texas Rangers in the AL West with seven games remaining between the two teams. Atlanta, meanwhile, still sits 5.5 games behind Washington even after sweeping the Nationals over the weekend. While the Braves aren't conceding anything just yet, they'll be in rotation alignment mode if they don't make up a few more games this week. (The Braves and Nats have completed their regular-season series.)

So which way should Gonzalez and Co. go for the one game that will determine their postseason continues? No team in baseball history has ever had this much time to think about who should start a do-or-die game and there's bound to be plenty of speculation. Do you go with Tim Hudson's veteran experience? Kris Medlen's hot hand?  Tommy Hanson in hopes that he can somehow pitch well enough to save Hudson and Medlen for the opening of a five-game series?

Dave Cameron of Fangraphs actually thinks it should be none of the above. In an interesting article posted on Monday, Cameron proposes the Braves should start their best pitcher — closer Craig Kimbrel — for two innings and then rely on the bullpen to steer the ship the rest of the way. A starter could enter the game if the situation or matchup called for it, but the idea would be to save the starting arms necessary to win the five-game series that'd start two days later.

By flipping roles and begininning the game with the relievers, the opposition wouldn't be able to set their line-up to maximize platoon differential, and you'd ensure that the game wouldn't be lost before the team's best pitchers got a chance to pitch. Additionally, you'd ensure that you're never wasting an at-bat on a pitcher, giving your offense a boost in the process as well. And, because of the predictable nature of the schedule, the Braves should be able to rest their bullpen before and after that game takes place, meaning that they'll all be available for the entire division series, so that this usage pattern wouldn't have an adverse affect on the team's chances of winning the first round of the actual playoffs.

As Cameron points out, Baltimore and Oakland could also be in position where such an approach could make sense. Whether or not it's adopted by anyone is another matter.

I'm somewhat onboard with Cameron's idea of guaranteeing your best pitcher a chance to pitch while also maintaining the integrity of your rotation for the LDS. But I also don't think there's a chance that any manager is going to go for it. It's a forward-thinking idea and there's no manager or front office right now who's willing to risk an entire offseason's worth of grief should that closer or reliever go out and get tagged over the first two innings.

Even if a team did take the chance, there's also the possibility that its offense doesn't score many runs and that one of its starters is put in the unfamiliar spot of either closing a game or keeping it tied in extra innings. Maybe appearing in a different situation wouldn't faze the starters or the relievers, but maybe it would. No one's going to roll the dice on such a risk.

With that said, the way to actually implement such an approach would be to stage a couple of dry runs over a couple of games at the end of the season. And with the Braves comfortably owning a postseason spot, what do they have to lose by taking a trial run?