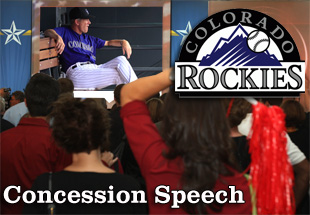 As the regular season winds down, many teams are already facing an offseason filled with golf rounds and hot-stove strategy.

But we're not going to let them get off that easy. No sir. No way. In an attempt to bring some closure between franchise and follower, we're giving a blogger from each team the opportunity to give a concession speech for this year's squad. Next up in our series is our own Mark Townsend, Big League Stew's resident Colorado Rockies fan.

My fellow Rockies fans: Thank you. Thank you all for coming on this most difficult day for our professional baseball team. And thank you for continuing to line owner Dick Monfort's pockets with your kind donations at Coors Field despite the disappointing and unacceptable results this season. I know your support means a lot to him and he will look forward to seeing you all again next spring and accepting more of your donations as the Rockies embark on their next campaign.

As I've already indicated and you surely already know, we are here today to acknowledge that the Colorado Rockies have fallen short of our expectations and have been eliminated from postseason contention for the third straight season. Just like all of you, I'm searching for answers as to how and why we find ourselves in this position, and why we are currently challenging for our worst poll results (96 losses) in franchise history.

I know what many of you are thinking. There's no way a team anchored by Troy Tulowitzki, Carlos Gonzalez and Todd Helton can or should deliver results similar to that of our first campaign in 1993 and our blow-it-up-and-start-over campaign in 2005. I agree with you completely, but that's where we're at. We have sunk to a new rock bottom in 2012, but we must find ways to reverse that course in 2013.

All of the answers and solutions we seek won't come easy, but I have already identified key areas where the Rockies have obviously failed or were unprepared. If you just look at the month of May, where they finished with an embarrassing 10-18 record — on the heels of an 8-20 May record in 2011 — and then followed up in June with a 9-18 mark, you can see where their focus was lost. The entire campaign got away over those 61 days. Going forward, there must be more focus on consistency, because while we can't always be at our best, we must avoid being at our worst for extended stretches if we hope to make an acceptance speech next fall.

Consistency is where it all begins, but there are other obvious flaws that must be corrected. 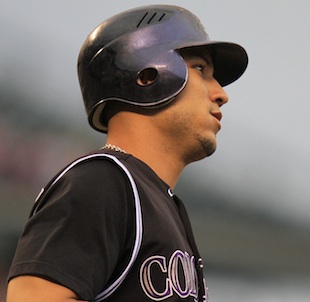 Mistakes were made: That lack of consistency also extends into our front office and our coaching staff. I feel like general manager Dan O 'Dowd and manager Jim Tracy belong in Pawnee, Ind., running Leslie Knope's campaign for city council. They clearly panicked after May and put the short-term and long-term future of our party in danger by switching to a four-man rotation that included a loose 75-pitch limit.

They called it a "paired pitching system," which emphasizes the effectiveness and durability of our middle relievers. I call it nonsense and a detriment to the development of our young starting pitchers. We must always have an eye towards building our future, and instead we have witnessed pieces of that future like Drew Pomeranz, Alex White and Tyler Chatwood regress. This philosophy has proven counterproductive and also ties our hands when it comes to making critical in-game decisions, because the system always takes precedence over game situations.

We also have to allocate our funds more wisely. Our supporters are fantastic, but our campaign still doesn't have the financial backing that many other candidates enjoy. We tossed a lot of that precious money around last offseason by bringing in Michael Cuddyer via free agency and Jeremy Guthrie in a trade with the Baltimore Orioles. Needless to say, we didn't get a good return on those investments, and somehow ended up with Jonathan Sanchez in a July 20 trade as a result. We seriously considered conceding the race right that day, but were talked out of it by our advisors.

But I would be lying if I said that was the first time we considered conceding. That actually came on June 16 in Detroit, when our season long struggles on defense were summed up in one adventurous play:

When you can turn a routine groundball to the pitcher into a Little League home run, it's time for serious reevaluation.

Mudslinging time: Our main competitors in this race have shown ruthless aggression all year. I'm sorry, we just can't keep up with the Los Angeles Dodgers and their new leadership throwing money at all of their problems.

When we lose Troy Tulowitzki, Todd Helton, Michael Cuddyer, Juan Nicasio, Jhoulys Chacin and Jorge De La Rosa, we simply don't have the depth or resources to replace their production adequately for long periods of time. But again, a lot of that reflects poorly on our structure as we have been unable to develop from within our own ranks.

And we can't keep up with the San Francisco Giants because, well, they're just a little smarter and a lot luckier than we are when it comes to taking gambles. Case in point: Marco Scutaro gave us 30 RBIs in 95 games this season. Once we traded him it only took him 45 games to produce 30 RBIs for San Francisco. How does one make sense of that?

Hope for the future: I know you have been beat over the head with a lot of brutal honesty today. Let me give you a little more. We DO have reasons to be excited about our outlook in the coming years. Among those would be rookie catcher Wilin Rosario, who has shown us his power with 25 home runs — most ever by a Rockies catcher and tied for most by a Rockies rookie with Todd Helton. Granted, he's a little rough around the edges with 20 passed balls behind the plate and an OBP well south of .300, but the young man's work ethic should make us all optimistic that he can and will improve those weaknesses while maintaining his strengths.

We've also seen promising things from Josh Rutledge. While filling in at shortstop, Rutledge has proven to be a natural. He's intelligent, he's instinctive, and he can slide over to second base full time in 2013 giving us a very strong offensive core along with Tulowitzki, Gonzalez, Rosario and center fielder Dexter Fowler, who also enjoyed a breakout season.

A change is going to come: Listen, I can't guarantee big changes in the offseason. We have a very loyal ownership that is committed to the current managerial structure. The changes we saw in-season with Dan O'Dowd moving his focus to player development and Bill Geivett assuming day-to-day operations of the major-league team, along with Bob Apodaca stepping down as pitching coach, are likely the big moves we would have seen this winter.

Perhaps we'll see a new full-time pitching coach named, but the duo of Bo McLaughlin and Jim Wright appear locked in. We'll definitely have a five-man rotation, and my understanding is we will raise the pitch limits by 16 to 25 percent. That's good news. And with any luck, that will be raised even more as the campaign goes along. I don't foresee another splash in free agency or a key piece being moved to restock our prospects, so please don't anticipate anything major happening.

The biggest changes we all have to root from the Rockies are just like the changes we have to make in our own lives. They have to come from within. There's plenty of potential in that clubhouse, but they have to take more pride in themselves and fight harder to improve and achieve their goals. It's all on them.

The Colorado Rockies 2012 campaign was not a good one. I'd be lying right to your face if I said any differently. Judging by some of the nods, shrugs, hand gestures and brown paper bags I've seen in the audience today, you're running out of patience. I don't blame you. You have a right to be angry and demand better. But please, always keep your perspective.

This is the campaign we all chose to support two decades ago. We can't bail on the cause now just because times are getting tough. The Rockies are going to be here for us again in the spring. That's something you can't say for your favorite NHL candidates and nearly couldn't say for your NFL and NBA candidates 12 months ago.  They may stink again, yes, but they won't let us down or fail to entertain us in all of the right ways and all of the wrong ways. You can't count on that.

And who knows, with a little good health, good luck, inspired play beginning in April and not August, and that extra seat in the postseason available for the taking, our return to relevance in this unpredictable world might be just around the corner.