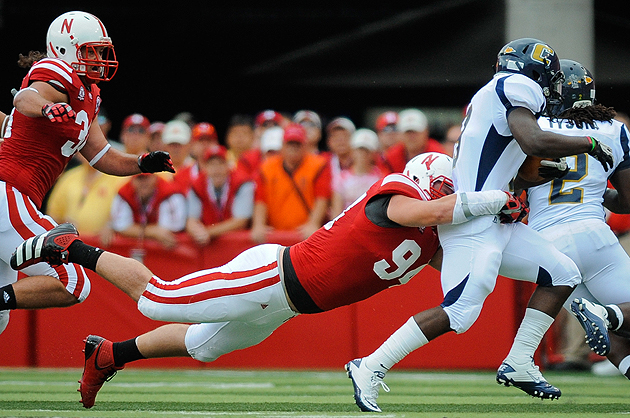 New York Giants general manager Jerry Reese is fond of saying that beyond the NFL draft's third round is when team personnel really start earning their paychecks, and quite a few people in front offices around the league got a good start on that in a fourth round that featured a great deal of talent. Of course, various dings pushed these prospects to the third day of the draft, but there are a lot of rotational players in this round as well as a few potential foundation starters. Here are the best values as we see them.

Houston Texans — Jared Crick, DL, Nebraska (126th pick overall) — Probably a second-round pick had he not lost a great deal of the 2011 season to injury, but Crick was medically cleared at the scouting combine, and he's a perfect movable chess piece for Wade Phillips' defensive fronts. He has the ability to play five-tech end and some outside end in four-man fronts, and given Phillips' recent preference for putting lighter guys inside as nose tackles in his one-gap concepts, I could see Crick getting some time there as well. Perfect marriage of player and scheme.

Arizona Cardinals — Bobby Massie, OT, Mississippi (112th pick overall) — Massie's tape concerned me because I didn't see him transitioning to any kind of zone scheme, but in an offense like Arizona's, which features a lot of power blocking inline, Massie's a natural fit. Not a natural left tackle (though, when you're talking about Levi Brown, you may wonder if anything is an upgrade), but he could start on the right side right away and become an elite run-blocking masher over time. Gave Michael Brockers all he could handle in 2011 LSU game.

New Orleans Saints — Nick Toon, WR, Wisconsin (122nd pick overall) — Injuries have been a problem, but Toon could be a great replacement for Robert Meachem if he can stay healthy. He's a decent speed receiver who understands the route tree and has a nice habit of picking up speed at the right time after he makes his cuts. Russell Wilson's former best buddy will now catch passes from the patron Saint of height-impaired quarterbacks.

[Also: Colts use draft Day 2 to secure weapons for Andrew Luck in form of two TEs and a WR]

Washington Redskins — Kirk Cousins, QB, Michigan State (102nd pick overall) — Yes, the questions came fast when the Redskins became the first team to select two quarterbacks in the first four rounds since 1989, but the pick makes sense in one way — Robert Griffin III is bigger and stronger than Michael Vick, but quarterbacks who run around a lot tend to get hit a lot, and they tend to get hurt as a result. The Redskins will need a coachable and reliable backup who can come in, Ty Detmer/Jeff Garcia-style sub who can come in and help win the odd game as a spot starter. Does that sound like Rex Grossman to you? Cousins needs some help keeping it together under pressure, but he's halfway to being the ideal West Coast offense backup.

Denver Broncos — Omar Bolden, CB, Arizona State (101st overall pick) — Bolden tore his left ACL in a preseason 2011 practice, but the tape that exists shows a potentially elite cover cornerback. Not a big player (5-foot-10, 205 pounds), but can player bigger than that both in the run game and covering vertical receivers downfield. "I've got it back. I'm ready to play, I'm ready to compete," Bolden said of his ability to play when asked about the recovery during his first conference call with the Denver media, If that's the case, Denver got a real steal here. Also a great returner.