OKLAHOMA CITY (AP) Dirk Nowitzki was hoping for the same kind of friendly bounce that allowed Kevin Durant to put the Oklahoma City Thunder ahead in their first-round playoff series.

ST. LOUIS (AP) The road has been an extended highlight reel for the Los Angeles Kings in the playoffs. A breakthrough regular season doesn't mean much right now for the St. Louis Blues.

So these folks were playing slow-pitch softball on the Mall in Washington, D.C. on Monday night when a certain Washington Nationals rookie sensation happened by. What's a 19-year-old Major League Baseball player going to do on his first day off in the bigs? Bryce Harper just couldn't help himself:

He actually missed on his first swing! That's OK; Harper often points out that he faces an adjustment period his first time around a new league. He probably enjoyed hearing a bat go "ping" again, though, once he made contact.

Was Harper simply being wistful about missing his GED class trip to the nation's capital because of a baseball tournament, so he thought he'd give himself a walking tour of the sites and — lo, and behold! — there happened to be a baseball-like game in progress?

Not exactly. Here's what participant Reed Sandridge told The Stew's own Kevin Kaduk on Twitter about Harper joining the fun:

He was hanging out watching softball (doing some promo video) & we offered him an at bat! Sadly I couldnt run down his pop fly.

Harper makes himself easily spot-able with that haircut. I like the one guy faux-mocking him: "No batter, no batter!" But demanding that the "rookie" run out his fly ball? Pushing it. Sometimes it's better to say too little and leave them wanting more.

Bryce Harper stops by the Washington Monument fields on his first day in DC and takes a few swings during a softball game. Regardless of the outcome, he was a good sport and a good guy.

We can take several things away from this:

Harper is not too cool for school (despite skipping his senior year of high school). He's also an addict when it comes to a bat and ball. It's like Michael Jordan putting the rider in his contract with the Bulls that cleared him to play in any pickup hoops game, any time he wanted. Baseball is Harper's drug. 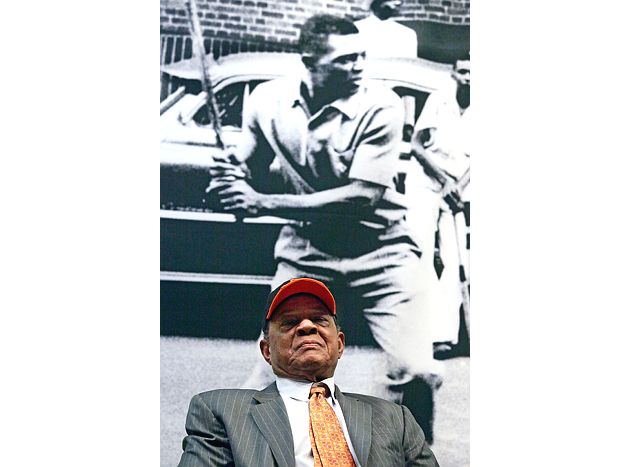 The scene also sort of reminded me of Willie Mays playing stick ball with those kids in Harlem back in the day. Not that Harper has the gravitas of Willie Mays (yet), and not that Harper's softball buddies are as adorable as Willie's buddies from 60 years ago. But we'll be watching this video and saying "Do you remember .. ?" when Harper turns 80. 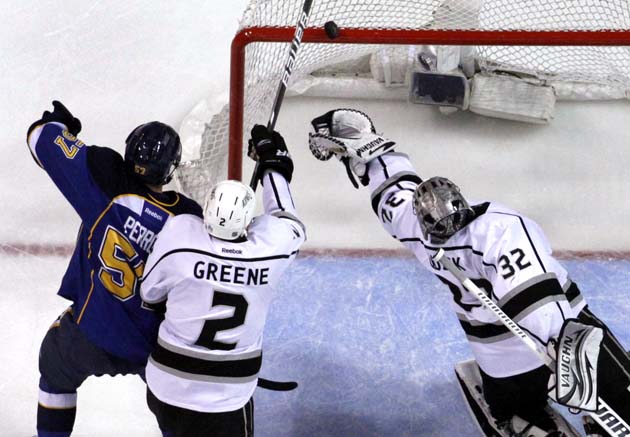 Jonathan Quick causes a puck to hit the crossbar with mind sorcery.

After a 5-2 blowout win in Game 2 versus the St. Louis Blues, the eighth-seeded Kings take a 2-0 lead back to the Staples Centre in Los Angeles for the second consecutive series. They iced this one early, putting 4 past Brian Elliott in the first period alone. Kopitar scored two of those, his first coming shorthanded after he showed some remarkable patience to drag this puck around Brian Elliott:

Brown picked up 3 assists in the Kings' win including a helper on both Kopitar goals. Right now, you'd have to argue that he's an early Conn Smythe favourite. Brown's work on the penalty kill is especially noteworthy: He's got 4 shorthanded points already this postseason.

After Game 1, the Capitals' netminder claimed the long stretches without a shot caused him to lose focus a little, so he must have really appreciated the increase in action for Game 2. The Rangers put 28 shots on goal and Holtby stopped 26 of them in a strong bounceback performance to lead the Capitals to a big 3-2 win.

Honourable mention: David Backes and Andy McDonald had 2 points apiece in a losing effort for the Blues ... Justin Williams, Mike Richards, and Dustin Penner all had 2-point nights for the Kings ... Jonathan Quick is in that creepy zone where he's stopping next to everything and the shots he isn't stopping are still finding a way not to go in ... Alex Ovechkin scored the game-winner for the Capitals, a nice way to get back at the coach that only gave you 13 minutes and the fans chanting "Ovi Sucks" once every period ... The passing on this Mike Knuble goal is nice:

Dishonourable mention: It worked out, but the fact that Dale Hunter played Jay Beagle for 6 more minutes than Alex Ovechkin is absurd, no? ... Barrett Jackman finished a minus-3 for St. Louis.

MIAMI (AP) Drops of blood stained the carpet leading up to the back entrance of the New York Knicks' locker room. The glass portion of a nearby fire-extinguisher case was quickly replaced. And Amare Stoudemire needed doctors and paramedics to treat a cut on his left hand.

It was a frustrating Game 2 for the St. Louis Blues. Forced to play without defensive leader Alex Pietrangelo, who missed the game with an upper-body injury, the Blues looked destabilized and shaky in the first, surrendering a wholly unexpected 4 goals. (Is it too late to nominate Pietrangelo for the Norris?) By the third period, it was 5-2.

When you get shelled like that on home ice, you just want to flatten someone. Lucky for T.J. Oshie, he got his chance in the third period when Dustin Penner just happened to collect the puck behind the Kings goal.

This hit is especially impressive for two reasons: first, Penner is, as you know, a rather large specimen, and Oshie launches him with some serious force.

Second, it's a completely clean hit in the tail end of a blowout -- a novel concept these days.

That doesn't prevent a scrum from ensuing, mind you. The next two minutes are pure chaos, with gloves a-flying, Penner attempting to pull David Perron's head off for some reason and Oshie losing a contact lens. But still -- progress.

Prior to the series, Oshie said the more physical team would win. That doesn't hold up when you surrender as many goals as the Blues did Monday, but it's probably safe to consider the high score of Game 2 an anomaly. Expect the physicality to be front and centre for Game 3 in Los Angeles, especially after Oshie set the stage here.

Update: Because he is a notoriously good sport, Penner tweeted about the hit after the game:

NEW YORK (AP) Alex Ovechkin silenced the Madison Square Garden crowd that has been taunting him for two games.

INDIANAPOLIS (AP) The challenge before the Indiana Pacers wasn't about game plans, execution or matchups.

Through two periods against the St. Louis Blues, things were going pretty pretty good for the Los Angeles Kings: Leading Game 2 of their Western Conference semifinal 5-1 thanks to two goals by Anze Kopitar; goals by Jeff Carter, Mike Richards and Justin Williams; and a 3-point night for Dustin Brown.

On a late second period power play, the Blues thought they had cut into that lead. But when things are going good … well, just look at what happened when the puck trickled behind Jonathan Quick:

"Boy, you talk about gettin' the breaks" … no kidding. The puck came to rest directly on the goal line, and neither Quick nor a Kings defenseman nor a Blues stick was able to poke into the net. The War Room backed up the call on the ice, and it was "no goal."

We've said it before, we'll say it again: Jonathan. Quick. Is. A. Jedi.

(Reuters) - Spanish golfers will have extra motivation to win in Seville on Sunday with this week's European Tour event marking the 100th birthday of their national open and the first anniversary of the death of the great Seve Ballesteros.