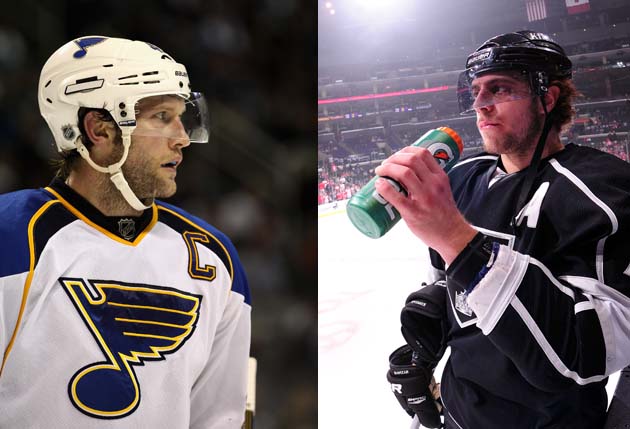 The No. 2 seed St. Louis Blues and the No. 8 seed Los Angeles Kings will clash in the Western Conference semifinals beginning Saturday night in St. Louis. Here are 10 items for your consideration about this matchup.

First, let's clear up a misconception: both of these teams can score just fine. The Kings may have been offensively inept for most of the season, averaging just above 2 goals per game, but the Jeff Carter trade balanced out their lines and notably improved the offense. They've averaged 3 goals per game since. The Blues, meanwhile, were a middle-of-the-pack offensive team. Not great, but not terrible.

Still, don't expect offense. Both of these teams excel at preventing it. From NHL.com:

Those trends have carried over into the playoffs, as each team allowed a League-low eight goals in winning their first-round playoff series in five games.

Some might find this is boring, but consider this: everyone loves overtime. This entire series will effectively be overtime, meaning the inevitable overtime will be super overtime.

The Kings have a Vezina nominee in Jonathan Quick, who led the league in shutouts with 10. The Blues counter with the tandem of Brian Elliott and Jaroslav Halak, who combined for 15 shutouts and the Jennings trophy.

If the regular season is any indication, expect this one to have more goose eggs than an Aesop fable. In both games with Darryl Sutter and Ken Hitchcock behind the benches, the final score was 1-0. Furthermore, in 4 contests this year, the two teams have combined for 4 shutouts, two of which came in the same game, a 1-0 shootout win for the Kings.

The Kings and the Blues were 3rd and 4th in road hits this season, which is good news, since it's literally impossible for any of these games to be played without a road team.

The two teams combined for 231 hits in the 4-game season series and, if T.J. Oshie is to be believed, both teams are expecting a continuation of that physical battle to determine the series. From the Toronto Sun:

"I think the more physical team is going to win," Blues forward T.J. Oshie said. "Whoever plays the most physical the longest is going to get the job done."

Okay, so goals may be scarce. But this could be the most physical first-round series in years.

It wasn't just their "you're welcome" tweet. The Kings' social media team ruffled the feathers of Canuck fans in every game of the postseason's first round, and Blues fans on Twitter can expect respectful jabs in their direction all through the second round. This is even more likely when you consider that the Kings are coming up on 100,000 followers. They're motivated.

Both of these teams are loaded with big, two-way centres, but the match up the middle that will matter most is David Backes versus Anze Kopitar.

Kopitar is the star of the Kings' attack. He's the only player with more than 60 points on the year, and as he goes, so go the Kings. He'll be in tough to go, however, with the Selke-nominated David Backes all over him. Backes smothers and punishes his assignments. Can Kopitar withstand the kind of assault Backes puts the opposition's top guy through on a nightly basis?

There are so many celebrities in the audience at Kings game that the Kings have created their own channel to keep track of them. But look at this list. Sure, the Staples Centre has celebrity backing hither and thither, but for every Tom Hanks and Rita Wilson, there's a Cuba Gooding Jr.

The Blues, on the other hand, will really just be sending one guy: Don freaking Draper.

Sure, it's a roster of one, but at least St. Louis's celebrity roster is all A-listers.

Drew Doughty and Alex Pietrangelo were drafted 2nd and 4th overall, respectively, in a 2008 draft class that revolutionized several teams from the backend. Three years later, these two are the puck-moving engines of two of the Western Conference's elite.

Doughty's emergence happened first, which is to be expected from the more exciting player. But Pietrangelo has evolved into as steady a blueliner as there is in the league. He just missed out on a Norris trophy this season for being the defensive rock of the league's best defensive team. I'd say he quietly surpassed Doughty this year.

Doughty remains the gamebreaker, however. He could be the most offensively gifted player in the series, and he'll need to be in order for the Kings to get the upper hand in this series.

Both of these teams came into the NHL in 1967, and neither has won a bloody thing since. Who will overcome the curse of 1967 first?

The Kings have are 0-8 versus the Blues in the postseason. From STL Today:

This will be the third time that the Blues and L.A., who both entered the league as expansion teams in 1967, will meet in the postseason. The others were 1969 and 1998, and both times the Blues swept the Kings in four games.

The Blues really set the stage back in 1969. Can they maintain that momentum into a fifth decade?

Blues in 7. T.J. Oshie may think this series will come down to physicality, but I think it will come down to discipline. These teams are very evenly-matched, but if there's a difference I see, it's that the Blues' core is just that much more reliable, that much more disciplined. They don't push, they don't overextend themselves, and they rarely make mistakes. In a series where limiting mistakes will be key, the Blues have the slightest edge.