Luck proves his greatness with a brilliant Pro Day performance 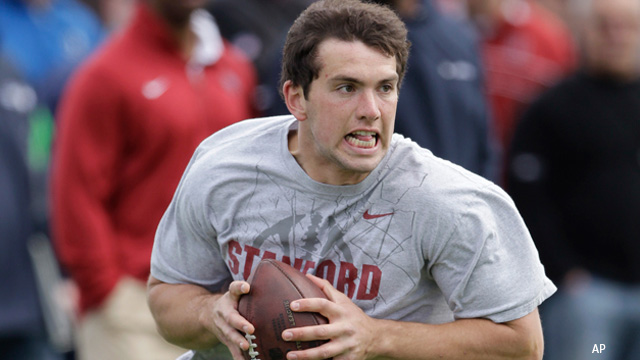 PALO ALTO, Calif. -- A huge media throng showed up at Stanford on Thursday to see quarterback Andrew Luck engage in a Pro Day throwing session in which there were 48 scripted throws and just three incompletions -- and all three incompletions were placed perfectly by Luck. It's difficult for the consensus first overall draft pick to raise his stock at a Pro Day throwing session, but Luck did just that by displaying every attribute he possesses, showing off a few he's been working up to new levels, and ending his performance with a 75-yard bomb that was right on point -- but dropped.

Luck started warming up with quarterback coach George Whitfield about noon; he did stretching and then warm-up throws for a good half-hour. He started his throwing session with sideline routes 15-20 yards to the right side. The first few passes went that way, and Luck added play action and boot action at the end. Then, a few of the same routes to the left side. Then, shorter seam routes, then 10-yard out and ups. There was a hard comeback about 10 yards to the right, then one to the left

Then, specific timing drills in which Luck had to get his body turned right very quickly for quick screens to the right. He then had that same quick turn exercise with a coach dropping the ball into his hands so that he could throw longer outs. The exercise was seemingly done to affect his focus and timing, and you could almost see Luck thinking that it would take a lot more than an off-timed simulated snap to throw him from his bearings.

When Whitfield used a broom and ran after him to simulate a pass rush, Luck showed every bit of his remarkable and underrated mobility - specifically, his ability to read routes on the run, keep his eyes downfield, and time it up with his receivers no matter what.

Another very impressive subtlety -- on three occasions, Luck's receivers slipped or stumbled, upsetting the timing of the route, and in each case, Luck adjusted on the fly to make the completion. Unlike some other highly regarded quarterbacks in this draft class (specifically Oklahoma State's Brandon Weeden), Luck has no issue retiming routes when he needs to. 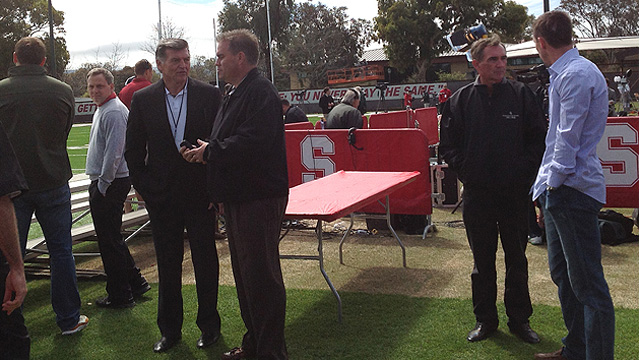 In his post-Pro Day press conference, Luck said that one thing he really wanted to show Thursday was his ability to throw consistently and accurately against his body. He was able to do so with seemingly identical accuracy and velocity, which was very impressive. On one play, he rolled out against a "broom blitz," headed left, and zinged a perfect pass the other way at least 30 yards downfield. The throw was on a rope, and timed perfectly.

I don't know if I've ever seen a college quarterback with Luck's touch on intermediate passes (defined as 10-15 yards in the air). He has an uncanny understanding of velocity for all throws, but when he lofts one up for the receiver to run under and catch, it's a sight to see. He was just as impressive on stick throws, even across his body, and any concerns about his functional velocity to throw into tight windows at the NFL level should have been obliterated by this throwing session.

When driving the ball, Luck does so with outstanding technique - he brings it overhand with no hitch at all. As I went through the observation of his workout, I got a renewed sense that Luck's purity of technique allows him to make repeatable throws most other quarterbacks will not be able to make at any level.

Luck's mobility was really on display, and I was happy to see it, because I've long believed that people undersell his athleticism. When watching Luck, it's important to peer beyond the perfection of the throws to understand that he's making so many of those throws in planned and predetermined rollouts -- he's not just bailing out. Because of his effective mobility, I'm tempted to say that Luck very much reminds me of Steve Young, and I do not use that comparison lightly. He can roll right or left, avoid pressure without losing a step, and make any throw necessary in developed read concepts.

Luck has an outstanding feel for play action, especially the boot-action fake. He would sell the play fake, roll right or left, sense pressure, and still align with receivers in motion on timing routes. I've seen him do that enough in games to know that it wasn't a product of the shorts and shirts environment.

While I believe that any coach with a three-year plan would be just as well-served by selecting Robert Griffin III, there is absolutely no question that Luck is ready for the NFL right now in a way that we haven't seen since Peyton Manning came out of Tennessee in 1998. It's entirely appropriate that Luck will most likely replace Manning in Indianapolis.