J.T. Thomas is pretty much the best person ever 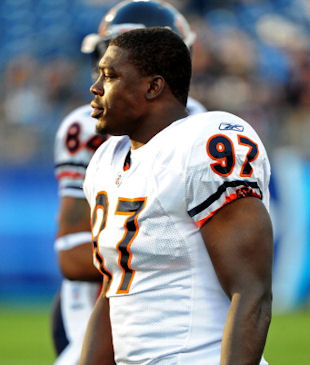 J.T. Thomas is a rookie linebacker for the Chicago Bears, drafted in the sixth round out of West Virginia. If you know his name, it's probably not because of anything he's done on an NFL field, because he spent his entire first season in the league on injured reserve.

No, if you remember him, it's probably from the time he made a girl's night and melted America's heart when he took Joslyn Levell to her eighth-grade prom. Kindness like that isn't a one-time thing for J.T. Thomas, though.

ESPN's Jemele Hill tells the story about Thomas taking a 14-year-old Anthony Grandberry to the Super Bowl. Thomas met Anthony, who has epilepsy, at the Bears' annual holiday party. Again, Thomas didn't play this year and thus, wasn't a high-priority target for autograph seekers. Anthony sought him out, though, and when he asked for an autograph, Thomas said it made him feel "like a Pro Bowler."

So Thomas wanted to return the favor. He showed up at Anthony's church with two tickets to the Super Bowl, and asked Anthony if he wanted to go with him. Thomas picked him up and the two made the three-hour drive to Indianapolis to watch the Giants win the Super Bowl.

There's a big heart on J.T. Thomas. And I haven't even mentioned the J.T. Thomas Foundation yet.

Here's more on that from Jemele Hill:

Last week, Thomas set his ambitious plan in action. He drove 1,300 miles from Fort Lauderdale, Fla., to Chicago with a group of volunteers who call themselves the "Ready Ready" crew. Along the way, they visited epilepsy centers in Fort Lauderdale and Orlando to raise awareness about a condition that affects more than 300,000 children under the age of 15.

If J.T. Thomas ends up never playing a down in the NFL, he's already put himself in the Tremendous Human Being Hall of Fame. And if he's half as good a player as he is a person, he'll end up in the NFL Hall of Fame, too.