D.J. Williams wrestled cows in the offseason to stay in football shape … or so he says 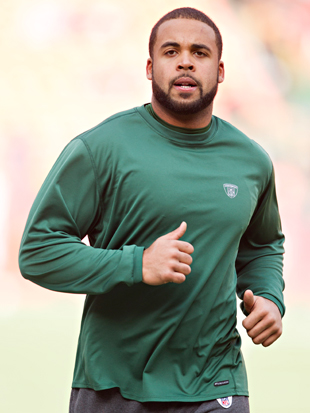 As a Seattle resident, I remember the stories of future Hall of Fame offensive tackle Walter Jones keeping his strength up back home in Aliceville, Ala., by pushing Escalades around -- and knowing full well that any SUV that tangled with Big Walt would get the bad end of the deal. People do all kinds of weird things to liven up their workouts in the dog days.

But second-year Green Bay Packers tight end D.J. Williams may have the best offseason regimen I've heard of yet -- the 2011 fifth-round draft pick out of Arkansas credits his impressive training camp thus far to the underrated but fast-rising sport of cow-wrestling.

No, really. Several Packers beat writers asked the affable Williams if he was pulling their legs, and he insisted that he only pulled legs of the bovine variety.

"I wrestle cows every day," Williams said. "Back home in Arkansas, we don't have anything else to do."

And how does one accomplish such a feat? "You just try not to get hurt or die," he said. "Do whatever you can to stay alive ... It's very difficult to put him on the ground. If you can wrap the hind leg with the front leg, you have a good chance. If you get enough push."

Uh, OK. This apparently isn't an official rodeo-style thing like calf-roping -- Williams said that he had never participated in a rodeo. His workouts feature a more informal style.

"I just roomed with a whole bunch of country people in college. Nothing else to do," Williams said, before adding that cow-wrestling is a great way to woo members of the opposite sex.

"It's very impressive. Usually, you say, 'Let's go cow tipping' and they feel it's a good rush when the cows start chasing you and stuff. They think it's to impress them, but I'm really working on my football stuff at the same time. Two birds, one stone."

[Related: Browns owner to give up controlling interest in team to Steelers fan]

Asked for photographic evidence, Williams begged off. "Y'all get lucky and find yourself in Arkansas, you might see it."

All kidding aside, Williams is a good young prospect. He won the Mackey Award as the best tight end in the nation in 2010, and he kept impressing me as a real standout during the week of Senior Bowl practices in 2011. With starter Jermichael Finley recovering from a mild concussion, Williams has been making the most of his time in the spotlight. But the cow-tipping stuff is more intriguing to us. That's just how we roll.

Teammate Tom Crabtree was asked if he thought Williams was making it all up -- while he acknowledged that such shenanigans would be very much like Williams, Crabtree was ready to give it a shot. These are great competitors, after all.

"That sounds about right. I don't know. Maybe I'll have to get down there next offseason and try the cow-tipping program."

Quick note to the Yahoo! Sports big brass: If y'all ever start a cow-tipping blog, I want in. 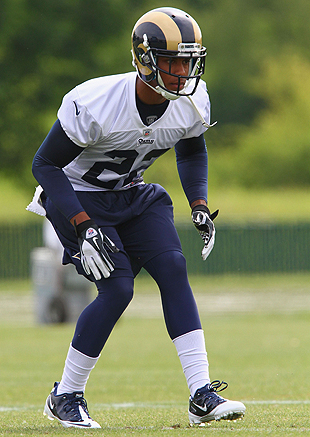 Minicamps and OTAs are nice development steps for NFL rookies, but things don't really get rolling until training camp starts. That's when you'll see as much actual helmeted contact as the league will currently allow (i.e., not very much), and that's when the playbook installation really happens. If you're a first-year player, your best shot at excellence is to hit the ground running in late July, and keep it rolling all the way through August.

That wasn't the case for Trumaine Johnson, the third-round cornerback out of Montana. Johnson was in Stockton, Calif. for pre-camp preparation, and he had a flight scheduled for Wednesday morning, so he could get out to St. Louis the same day and get started with his new teammates at the team's rookie minicamp. Sadly, the rookie discovered the hard way that he needs a new alarm clock.

"I set my alarm clock," Johnson told the St. Louis Post-Dispatch. "I didn't hear it. I missed my flight. I messed up."

Messed up, indeed. Since there was no way for Johnson to get to camp in time, he had to sheepishly explain himself, and arrived in time for Thursday's practice. There will be no fine from the team for Johnson's late arrival.

There were a few issues with Johnson's contract, which he has signed, and the youngster says that there was no message to the missed beginning. It was simply a matter of catching too many Zs. When he finally got out there on Thursday, Johnson re-learned what he first discovered in the spring -- the NFL game is a bit more complex than what he had seen before.

"The biggest adjustment for me out here was just the speed," Johnson said after he finally got back on the field on Thursday. "But other than that it was just football — and I feel like I can come in and play football. That's what I've been doing all my life."

The Rams will need him to. Last year, they suffered a ridiculous number of injuries to their secondary, and went about righting the ship by selecting Johnson in the third round, and troubled but talented cornerback Janoris Jenkins in the second.

As long as Johnson keeps his head on a swivel -- and buys a new alarm clock -- he's got a good chance to see serious starting time sooner than later.

Other popular content on the Yahoo! network:
• Browns owner to give up controlling interest in team to Steelers fan
• Tim Brown: Dealing for Matt Garza a real risk after MRI results
• How the Queen of England was persuaded to do the Opening Ceremony
• Shine: Lost wedding ring found four years later in unlikely place

by NFL Ticket Classified Listings in Fantasy Football, General
See the New England Patriots with these incredible BELOW FACE VALUE Tickets!! FrontRowFootballTickets.com has 4 extra tickets to the Philadelphia Eagles at New England Patriots-Preseason football game at Gillette Stadium on 8/20/2012. The tickets are for seats in section 316 row 18 - can split tickets if necessary.

by NFL Ticket Classified Listings in Fantasy Football, General
See the Steelers take on the Colts for BELOW FACE VALUE!! FrontRowFootballTickets.com has 2 outstanding seats available to see the Indianapolis Colts at Pittsburgh Steelers-Preseason football game at Heinz Field on 8/19/2012. See Indianapolis Colts at Pittsburgh Steelers-Preseason live from your seats in section 510 row EE for only $23.00!