Pats: Despite Gisele, no finger-pointing (AP)

by Yahoo! Sports - NFL News in Fantasy Football, General
The Patriots say there's no finger-pointing after their Super Bowl loss, even if supermodel Gisele Bundchen won't abide by that code. The wife of New England quarterback Tom Brady was caught on camera complaining that dropped passes doomed the team to a 21-17 loss to the New York Giants on Sunday -- the Patriots' second loss in the NFL title game loss in five seasons.
Tags: Bowl, Bundchen, Gisele, Gisele Bundchen, loss, nfl, The Patriots
No Comments Share Read More

by Yahoo! Sports - NFL News in Fantasy Football, General
Smiles were the order of the day, as the Super Bowl-champion New York Giants returned home, victorious once again. The team's charter plane from Indianapolis touched down around 1:55 p.m. Monday at Newark Liberty International Airport in New Jersey. Several players saluted the crowd as they departed the aircraft, and some used cameras and video recorders to capture the moment and the scene.
Tags: Bowl, champion, charter plane, home, new york giants, Newark Liberty International Airport, nfl
No Comments Share Read More

Want to watch UMass kids riot and a Giants fan get punched in the back of the head?

Of course you do.

1) You should not punch anybody in the back of the head.

2) If you decide to taunt angry, irrational rioters by salsa dancing in their face, you probably will be punched in the back of the head.

I'm not even totally comfortable calling this a riot. I see a bunch of angry kids milling around. Fourteen arrests were made, 13 of them were UMass-Amherst students, and crowds were dispersed by smoke bombs and pepper balls.

Anyway, about the Giants fan who took a punch in the back of the head, I'm pretty sure he's fine with it. You can see him at about the 0:27 mark in the video ready to throw a fist, and then he shifts quickly into salsa dancing. These are the actions of a man who is expecting to be clocked in the head. He didn't even seem to be in a hurry to leave after he was.

Whatever the case, two large heroes in gray sweatshirts pulled him out of there and saved him from further harm. He will live to salsa another day. Hopefully, next time, not for the sole purpose of being a smug jerk.

Tom Coughlin is looking forward to the parade and a couple weeks off to reflect on the Giants' second championship in five seasons. Then he will begin preparations for defending the title. The 65-year-old coach sees no reason to retire now. "I mean, it's what I do," Coughlin said Monday morning, hours after New York beat the New England Patriots 21-17 in the Super Bowl.

The lesson here? When you are fiesta, you are always fiesta. Bigger pictures to follow.

According to Deadspin, these pictures were taken at the invite-only Patriots postgame party. LMFAO was there, as were Maroon 5, Steven Tyler and Earth, Wind & Fire. It actually doesn't look like a much different atmosphere than the one on the Giants team plane. It really is a fine line between winning and losing.

I can see some people getting bent out of shape over this, because some fans want the players to take the losses as hard as they do. But not everyone is this girl. Sadness and disappointment can find many different outlets.

I assure you, Matt Light, Rob Gronkowski and anyone else who danced at the Patriots party are competitors. They didn't give less effort than anyone else, and they are not less reliable in the future. They just chose to distract themselves from the sadness with a party and some shirtless gyrating. Matt Light might not get that opportunity very often.

Sometimes, dancing is the only way to get the pain out. 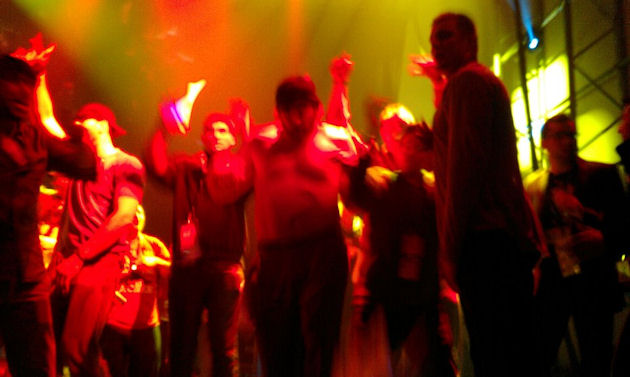 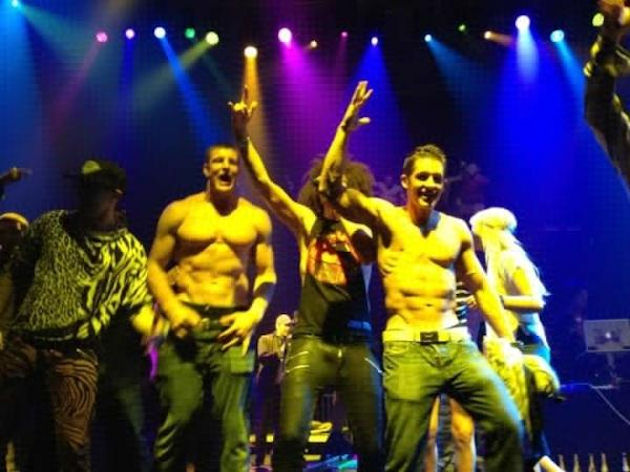 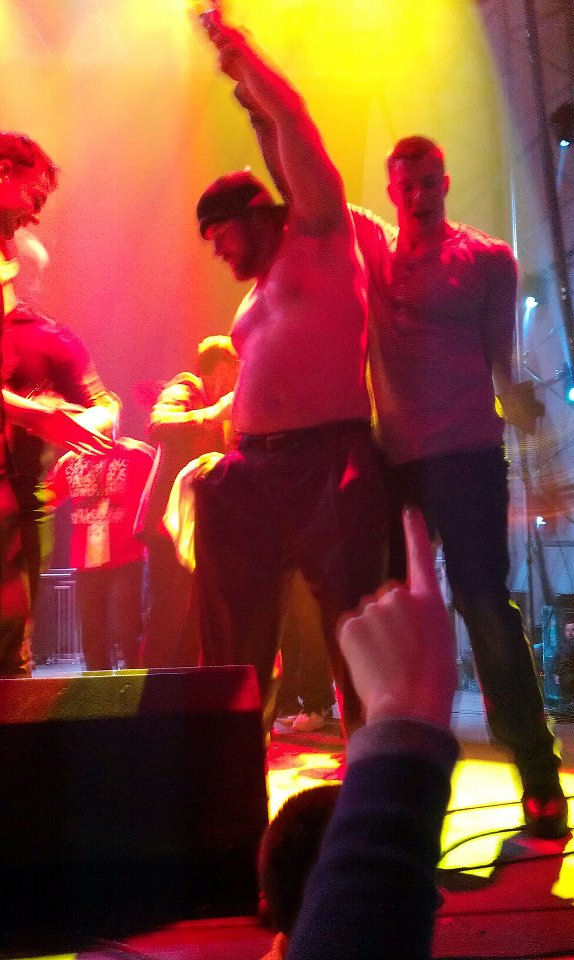 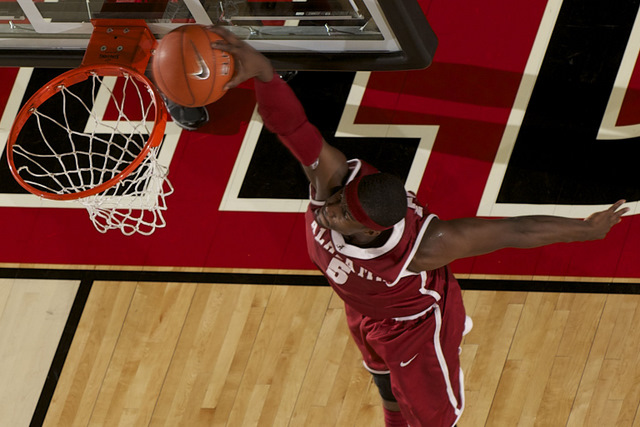 Tony Mitchell will miss at least Alabama's road game at Auburn on Tuesday night as a result of conduct detrimental to the team. Grant told the Tuscaloosa News that the suspension was a result of "an accumulation" of issues, but he would not elaborate further.

The timing of Mitchell's suspension comes two days after he came off the bench for the first time this season in a double overtime 69-67 win over Ole Miss. Mitchell drew postgame praise from Grant after scoring 14 points on 6-for-12 shooting and grabbed four offensive rebounds.

"Tony stepped up and was terrific down the stretch," Grant said. He took a blow to the head in the first half and had to sit for a while in the second half, but he was dying to get back in there and he really made some plays for us there in the end."

Whatever happened in between Saturday night and Monday morning could be costly for an Alabama team that has slipped toward the NCAA tournament bubble due to a lackluster start in SEC play. The Tide (15-7, 4-4) still have a top 40 RPI thanks to a strong strength of schedule, yet their best wins (Wichita State, Purdue and VCU) all came in November.

Mitchell has not been as efficient a scorer as he was a year ago when Alabama missed the NCAA tournament despite a 12-4 SEC record, but the high-flying wing is still averaging 13.1 points and 7.0 rebounds per game. An extended absence would be ill-timed with the Tide facing important road games against Auburn and LSU this week, followed by a golden opportunity for a much-needed marquee win at home against Florida on Feb. 14.

Alabama probably needs a minimum of five wins in its final eight SEC games to feel confident about its NCAA tournament chances. The uncertainty surrounding Mitchell's place on the team certainly won't help the Tide achieve that.

We know from the hit Hootie & the Blowfish song "Only Wanna to be With You" that the Miami Dolphins make lead singer Darius Rucker cry. And several months ago a mother taped her son crying after a Jets loss. After the Super Bowl, we can now finally add Tom Brady to that list.

A stunned — and sobbing — New England Patriots fan was videotaped by whom we now presume to be her ex-boyfriend in the moments after her team's Super Bowl loss to the Giants. The fan, in her Tom Brady jersey, begins her sniffling tirade against the "stupid" Patriots in classic fashion as she realizes that the team "will never play together again."

The presumed boyfriend can only respond ever so cleverly with "I'm sorry baby." Then he continues to videotape.

Much of the audio is inaudible due to her sniveling into her sleeve - the hysterical ranting of a fan who probably doesn't know that the Patriots forever owe Mo Lewis for becoming a dynasty. But at one point as she lamented there not being any fellow New England fans around for her to commiserate with, the statement "I feel like an idiot" was clearly heard. Whew, at least we're not the only ones who feel that way.

The scathing analysis, perhaps just a notch below that which is offered on Showtime's "Inside the NFL," continued at the 1:33 mark.

"Yeah I know, I saw what happened. Everyone was just playing so stupid and they gave us a chance to win all the time and Tom Brady was just so stupid," she said, getting more hysterical.

Then a moment of lucidity as she realizes that what surely must be classified as an overreaction was making her look, well, she put it best before, "stupid."

"Now my makeup all over my face and I look like a friggin' McGoon," she said.

Perhaps we are blessed that eventually the cameraman says "OK" and turns off the camera because we just can't turn away. Then to quote Hootie once again, if we were him we'd just "Let Her Cry."

You may now continue with your life.

Ultimately, what matters about a Super Bowl is how it's remembered years from now. So please, remember nothing you see about this video from Taiwanese animation company NMA, because if you do, someday recounting those thoughts will get you institutionalized.

That great catch Mario Manningham made along the sidelines? The ball was on fire and caught with a basket like the ones they collect money with in church. Ahmad Bradshaw briefly entered the Matrix before he went into the end zone. And God doesn't love Tim Tebow anymore.

Also, Madonna is a "geriatric Lady Gaga"? Come on, that's not fair. Madonna crushed it. You know what else, Taiwanese animators? Her halftime show was twice as bizarre as your postgame animation of it. She wins. Step your game up.

The New York Giants were in high spirits on their return trip to Newark on Monday morning. In a video uploaded to YouTube by rookie linebacker Mark Herzlich, members of the team, led by running back Andre Brown, are shown singing and dancing on the plane to a catchy tune that's certain to get stuck in your head for the next 90 minutes:

"I got a ring! I got a ring. He got one too." It's like the complete opposite of that Beyonce song.