Peyton Manning throws three picks in the first quarter versus Falcons, comes up just short in the end 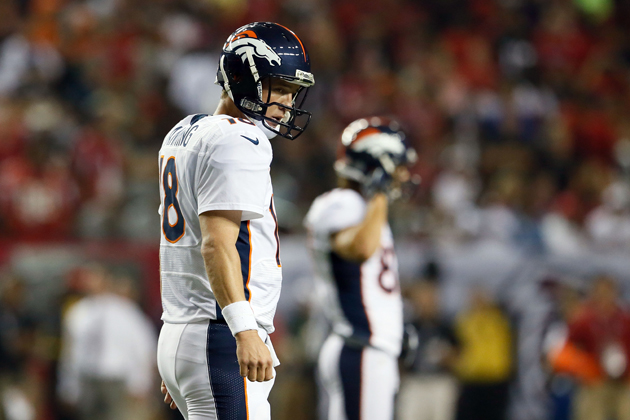 For the second time in his career, Peyton Manning threw three interceptions in the first quarter of a game. Last time, it was Nov. 11, 2007, and Manning threw a total of six picks in a 23-21 loss to the San Diego Chargers. Amazingly, despite Manning's foibles, the Indianapolis Colts were a late field goal from pulling off the win. But kicker Adam Vinatieri missed a 29-yard try with 1:31 left in the game, and that was all she wrote.

That San Diego game was a crazy, rainy-day adventure, but the Denver Broncos version of Manning threw his three first-quarter picks from the indoor comfort of the Georgia Dome. All three passes were deeper throws, which will have some wondering just how much zip the 36-year-old Manning has in his arm. In this case, the Broncos did march back from a 20-0 deficit to make the final score 27-21, but those picks were impossible to overcome.

"We were able to disguise our coverages very well; that's something we said all week we'd have to do," Falcons head coach Mike Smith said after the game. "You can't give the quarterback a pre-snap read, and we were able to do that early in the ballgame. He made some throws we were able to convert, and make plays on the ball."

The first interception came on the third play of the game, from the Denver 12-yard line, when Manning threw a deep seam pass to tight end Jacob Tamme. Falcons safety William Moore cut a route on an ill-advised Manning throw with three Atlanta defenders around the ball, and Moore returned the ball to the Denver 1-yard line. Falcons running back Michael Turner scored three plays later.

"It was great execution, and a great call by coach [defensive coordinator Mike] Nolan," Moore told SIRIUS NFL Radio after the game. "He did an excellent job of game-planning around Peyton, and it was just one of those plays where you zone in and play football. It was a momentum swing that allowed our offense to score early, and we needed that ... we took advantage of everything we saw on tape, and I think our secondary made a huge statement tonight."

Pick number two came with 11:58 left in the quarter. Manning threw the ball deep over the middle from his own 37-yard line to Tamme with two Atlanta defenders converging on the ball. Safety Thomas DeCoud was the recipient of this Manning gaffe, and he ran the ball back to the Denver 43-yard line after a 15-yard gain. On this play, Moore came up from Cover-2, while DeCoud fell back to the seam. It was the kind of coverage switch Manning could generally decipher in his sleep, but not this time. The Falcons drove downfield and added a 37-yard Matt Bryant field goal for a 10-0 lead.

The final interception of the quarter came with 7:10 remaining, and the ball at the Atlanta 40-yard line. Once again, Manning tried to go deep -- this time to receiver Brandon Stokley -- and this time, cornerback Robert McClain came up with the pick. Manning appeared to overthrow Stokley on the play, and McClain was right where he needed to be to make the play. The Falcons didn't score on the resulting drive, which was of small comfort to the Broncos.

Perhaps the most amazing aspect of this three-pick game was that Manning had played with both Tamme and Stokley in Indianapolis, so there were no unfamiliarity issues. It really did come down to Atlanta's ability to show Manning things he wasn't expecting.

Other popular content on the Yahoo! network:
• Golden Tate hopes to avoid fine for his block on Sean Lee
• Shaun White reportedly charged with vandalism and public intoxication
• Yunel Escobar's eye black contained gay slur
• Y! Homes: How to tell you have a bum contractor

Read the rest at: Peyton Manning throws three picks in the first quarter versus Falcons, comes up just short in the end