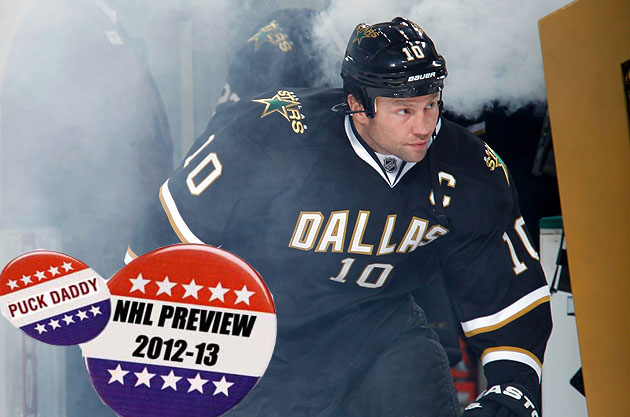 Yes, indeed, despite the promise of impending labor Armageddon and a prolonged work-stoppage, your friends at Puck Daddy are previewing the 2012-13 NHL season (whenever the heck it starts). Why? Because this is the most important election in the history of all-time ever, and you need to know the candidates — like the Dallas Stars.

Under new ownership (Tom Gaglardi) and with a new bench boss (Glen Gulutzan), things remained the same in Big D as the Stars missed out on the playoffs for the fourth straight season.

It all started well as Dallas opened up 11-4-0 and sat second in the Western Conference on Nov. 11. But that night, defenseman Alex Goligoski broke his thumb and missed almost a month of action. During his absence, the Stars went 4-7-1 and fell to eighth in the conference, a spot they would hover around for the remainder of the season. While Goligoski was out of the lineup, goaltender Kari Lehtonen, who was 13-4-1 at the time, missed over a month with a groin injury.

You see where this is going? Injuries stopped the Stars from building on their early season momentum and rather than making strides toward the playoffs, the team was instead moving in the direction of the trainers' room.

Over the summer the Stars brought in experience and skill hoping to make waves. Is it enough to find a spot in the West's top eight?

"Seriously, What the Hell is Jagr Doing Here?"

There weren't many players on the Stars roster last season that were born in the 1970s, but within the first few days of the free agent market opening on July 1, two more were added. Signing separate $4.5 million deals, 40-year olds Jaromir Jagr and Ray Whitney will provide over 40 years of professional experience and playmaking ability.

Uber-pest and fan favorite Steve Ott was shipped to the Buffalo Sabres in exchange for center Derek Roy. With Mike Ribeiro getting a new address in Washington, D.C., it'll be a new-look for the Stars' top six.

Also moving on were penalty killers Adam Burish (San Jose), Radek Dvorak (UFA) and Sheldon Souray (Anaheim). Adam Pardy was part of the Ott deal and Andrew Raycroft signed to play in Italy. Helping to re-fill the back line will be Aaron Rome, who signed a 3-year, $4.5 million deal after spending the last three seasons with the Vancouver Canucks.

At forward … Dallas finished 2011-12 22nd in the league with 2.49 goals/game and featured just three players -- Jamie Benn, Loui Eriksson and Michael Ryder -- with more than 20 goals. Bringing in Whitney, Jagr and Roy will help improve that area, as well as last season's 30th-ranked power play. After posting the worst power play success rate in franchise history (13.5-percent), Jagr and Whitney (20 power play points each) will be looked upon to help to keep the Stars away from the cellar -- and history -- again.

It's a contract year for both Ryder and team captain Brenden Morrow. In his first season in Dallas, Ryder led the team with 35 goals after back-to-back 18-goal campaigns with the Boston Bruins. Morrow, meanwhile, could make for an interesting trade chip should GM Joe Nieuwendyk need to make improvements. The 33-year old is coming off a 57-game, 26-point injury-filled season. He's a heart and soul guy who's been through the great times and more recent bad times in Dallas, and one you'd love to have on your team. But with the pressure of needing to turnaround the franchise, Nieuwendyk must go forth with improving the team if the right offer comes along, even if it means dealing away another fan favorite, who happens to be the captain.

Once Roy returns healthy, he's expected to be an offensive aid unless his surgically-repaired shoulder continues to give him issues. After that, the offensive depth on the Stars is lacking. Can Eric Nystrom chip in double digit goals again? Will any youngsters like Reilly Smith and Cody Eakin earn a place in the lineup?

On defense … they won't wow you, but there's some stability there between Alex Goligoski, Trevor Daley and Stephane Robidas. The season started going off-kilter once Goligoski broke his thumb in December, but he recovered -- even earning himself a 4-year, $18.4 million extension -- and continued producing before fading down the stretch. He was quarterback on a struggling power play and was the only Stars blueliner to play over three minutes a game with the extra man. Seeing James Neal score 40 goals in Pittsburgh won't make that trade any easier to digest.

Daley and Robidas will again by the reliable, minute-munching veterans. Rookie Brenden Dillon could fight for a roster spot after a strong year with Texas of the AHL.

Another youngster who could make an impact is Philip Larsen, who stepped up once Nicklas Grossman(n) was dealt to the Philadelphia Flyers. But at 22, will he need a few years of development first in order to be effective at the NHL? Aaron Rome was brought over from the Vancouver Canucks to fill a bottom-pairing role and provide a physical presence along with Mark Fistric. Sheldon Souray's booming shot from the back will be missed, as will his contributions on the penalty kill.

In goal … Kari Lehtonen became a changed man when he was dealt from Atlanta to Dallas. He committed himself to a conditioning program that turned him from a walking injury into a legitimate NHL goaltender -- one that earned him a fat 5-year, $29.5 million extension. In his two full seasons with the Stars Lehtonen has started 68 and 59 games, respectively, his most since the 2006-07 campaign. His groin injury in December didn't affect the rest of his year as Lehtonen posted career bests in goal-against average (2.33) and save-percentage (.922).

Spelling him during that month out of the lineup was Richard Bachman, owner of the NHL's coolest mask this season. Bachman stepped in and won five of his first eight NHL starts and split the rest of the 2011-12 season with the Texas Stars of the AHL and spot duty with the big club.

Pantera wrote this song for the Stars that's really easy to follow and gets the message across simply.

Ownership is finally stable. GM Joe Nieuwendyk can finally go about his business without worrying much about the cost of a free agent, especially after watching Brad Richards last summer walk to a giant pile of money waiting for him in New York City. Despite three playoff-less seasons, does Gaglardi give Nieuwendyk a bit more time to show improvements? And what kind of effect will the new CBA have on the Stars going forward?

Glen Gulutzan enters his season season behind the bench with a new assistant in Curt Fraser. Former assistant Willie Desjardins will coach the club's AHL squad, which could bode well for the future. It's a relatively inexperienced coaching staff, but that's not always a detriment. Gulutzan showed at times last season that he's still learning on the job, but that he's also up for the challenge of succeeding at the NHL level. He gained two teachers on the ice in Jagr and Whitney, who will help in the development of the team's younger players.

Jamie Benn will drive this team offensively. Currently an unsigned restricted free agent until this lockout mess is settled, Benn is looked upon as the future of the franchise and at 23 years old, is still getting better. Many expect big things from him this season, which also means...

Loui Eriksson will remain the league's most underrated player for the fifth year running, but one who could take the biggest leap is Benn, thanks to one Jaromir Jagr. Claude Giroux had a career season with the Philadelphia Flyer with Jagr on his line. The 40-year old Czech has settled into the "wise old sage" role in his hockey golden years and if he can instill into Benn what he did for Giroux, than the 23-year old will see his numbers rise for a fourth consecutive season and potentially put him on a grander stage in the eyes of many around the NHL.

The Stars were looking for change and brought in Derek Roy, shipping out noted shift-disturber Steve Ott in the process. Nine days after dealing for Roy, the Stars learned that he required shoulder surgery that would put him out until November. The injury lingered throughout the season, allowing him to produce just 44 points in 80 games for the Sabres. The 29-year old Roy is entering a contract year and once healthy will need to prove that he's worth a richer contract.

"Glen Gulutzan is one of the best young coaches in the NHL. The question is, how young?" 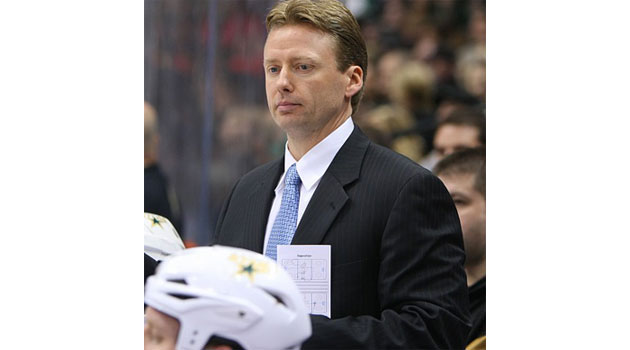 "Some people say as young as 12 years old.

"But the Dallas Stars won't release Glen Gulutzan's birth certificate. If he even has one."

"What are you hiding, Glen Gulutzan? Besides all of your action figures set in the coach's office ..."

There's some optimism and skepticism heading into the 2012-13* campaign for the Stars. Eriksson and Benn will only get better. Lehtonen has proved doubters wrong since coming to Dallas. But what of those 40-year old dinosaurs in Jagr and Whitney? Can they both provide adequate production -- something they've been able to do in their previous NHL stops -- while meshing with new linemates? Is the blueline strong enough defensively to keep them in playoff contention in always tough Western Conference?