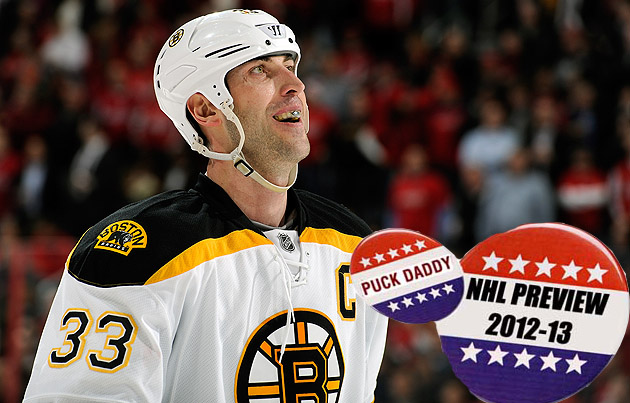 Yes, indeed, despite the promise of impending labor Armageddon and a prolonged work-stoppage, your friends at Puck Daddy are previewing the 2012-13 NHL season (whenever the heck it starts). Why? Because this is the most important election in the history of all-time ever, and you need to know the candidates — starting with the Boston Bruins.

After that spectacular bar tab, jokes about the Boston Bruins' Stanley Cup hangover were inevitable and, turns out, applicable. The B's stumbled out to the worst opening month for a defending champ since the playoff format change in 1994, leading to speculation that GM Peter Chiarelli should have tinkered more with the roster in the summer.

And then they became the Bruins again, finishing the season at 49-29-4 with a plus-67 goal differential. Sure, things got a little weird when Tim Thomas chose a tea party over lunch at the White House — which, coincidentally or not, synced up with a decline in his stats for the season — but Boston entered the Stanley Cup playoffs as Northeast Division champs and a team with a chance to repeat.

Then Braden Holtby and Dale Hunter Hockey happened, as the Washington Capitals pushed a tightly-played series to seven games and a Joel Ward OT goal in ended the Bruins' postseason. Weeks later, Thomas announced he had lost his smile and didn't intend to play in the NHL this season, all but ending a hugely successful run with the team.

Can the B's reload for another Cup run now that it's Tuukka Time?

"I believe the Federal government has grown out of control, threatening the Rights, Liberties, and Property of the People.

"This is being done at the Executive, Legislative, and Judicial level. This is in direct opposition to the Constitution and the Founding Fathers vision for the Federal government.

"Because I believe this, today I exercised my right as a Free Citizen, and did not visit the White House. This was not about politics or party, as in my opinion both parties are responsible for the situation we are in as a country. This was about a choice I had to make as an INDIVIDUAL.

"This is the only public statement I will be making on this topic."

It was another summer of tantalizing talk — like a potential trade for Rick Nash — but little tweaks instead for GM Peter Chiarelli.

The Bruins added free-agent defensemen Garnet Exelby, Matt Bartkowski and Aaron Johnson, as well as center Christian Hanson from the Capitals. They bid farewell to defensemen Joe Corvo (Carolina) and Greg Zanon (Colorado), probably without a going-away ice cream cake for either of them.

The Bruins should also have one significant addition from inside their organization: Dougie Hamilton, a highly touted two-way defenseman seemingly destined to make Leafs fans feel more miserable about the Kessel trade.

At forward … the big news is the return of Nathan Horton from a second concussion, after being limited to 46 games last season. He's had a healthy summer, and should be reunited with Milan Lucic (26 goals, 35 assists) and David Krejci (23 goals, 39 assists), provided the latter isn't (finally) traded.

Tyler Seguin will enter next season with a spiffy new contract (starting in 2013), a taste of speed dating and having led the B's in goals (29) and points (67) last season. Pest supreme Brad Marchand (28 goals) received his own contract extension, and will try to atone for a quiet postseason (1 goal, 1 assist) after a star-making one in the Cup run. Selke winner Patrice Bergeron had his highest point total (64) since 2007. He can win you a faceoff or two.

The Bruins' top six is damn good; but again, it's the grunts that keep this team in the elite category. The contributions from Chris Kelly, Rich Peverley, Gregory Campbell, Daniel Paille and Shawn Thornton provide heart, soul, grit, some offense and occasional smackdowns of Vancouver hockey writers.

On defense … Zdeno Chara played 25 minutes a night to a plus-33 with 55 points and 166 hits, which is very Zdeno Chara of him. He leads a Bruins blueline that returns five players — workhorse Dennis Seidenberg (24:02), in-his-prime Johnny Boychuk, punishing (sometimes self-inflicted) Adam McQuaid and veteran Andrew Ference. Add Hamilton to the mix, and you'd be hard-pressed to find another group this solid in the East.

In goal … Tuukka Rask gets his chance to own the starting job after Thomas retreated to his bunker. His highest number of starts in a season is 39; in 2011-12, he was 11-8-3 behind Thomas with a 2.05 GAA and a .929 save percentage. He's on a 1-year contract, the perfect amount of runway for both player and team to see if he gets it right. And if he doesn't … well, someone please protect the poor milk crates.

Anton Khudobin is the rather untested backup, at least for the moment.

"Bruins You Be Killin'Em", which is both an apt description for their style of play and a declaration for their affinity for capital punishment. (Seriously, how badly do you think they want to punish the Capitals? Especially Holtby.)

In five seasons with the Bruins, Claude Julien has finished with over 100 points in three of them and won a Stanley Cup. Which is incredible when you consider how often his bulbous head has been on the chopping block during that tenure.

The offense doesn't always click, but the Bruins' defense — through system and personnel — makes them an elite team. He juggles his lines like a clown at a child's birthday party, and that can either lead to incredible results (the Cup) or several weeks of "we've still got to get Krejci/Lucic going" laments.

GM Peter Chiarelli has the benefit of a deep-pocketed owner that's allowed him to spend millions to keep the core together. He had some masterstrokes in building a championship team — Chris Kelly, for example — but he's had his share of lowlights — Joe Corvo, for example. It'll be interesting to see how the Tim Thomas drama plays out this season.

Tuukka Rask. Thomas has back-stopped the Bruins to a Stanley Cup and five straight playoff appearances, picking up two Vezinas, a Jennings and a Conn Smythe in the process. With this team in front of him, nothing short of elite numbers will suffice for Rask.

The Bruins must chuckle when Dougie Hamilton's name pops up in trade rumors, like during the Rick Nash Derby, because there was a better chance they'd throw Rene Rancourt in a deal before the rookie defenseman. He's got Brent Burns wheels and a Chris Pronger comportment.

Cruel as it sounds: Horton. You hope and pray a player of his abilities hasn't entered the Lindros/Lafontaine spiral of concussions, but you also can't help but feel the potential is there. 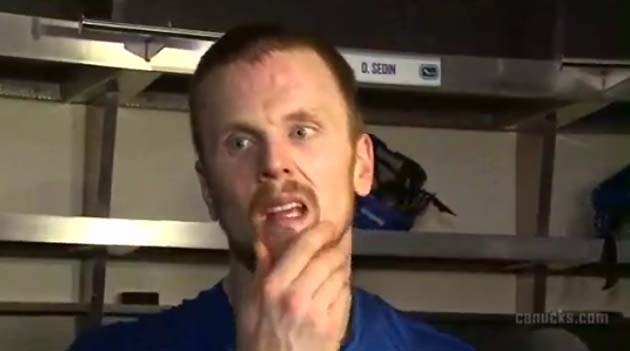 "Brad Marchand punched me. Six times. In the face. And Henrik felt all of them. It made him sad. Which then made he sad. Because…we're twins."

[An image of the ice]

"Brad Marchand keeps flopping on me."

"Brad Marchand sent me skates-over-eyebrows onto my head and then called it 'self defense.' I've never even thrown a check, what with my brittle bones."

"Brad Marchand … what an [expletive]. Paid for by The Mike Gillis Foundation, in association with Subban Industries."

First place in the Northeast Division, near the top of the conference and challenging for another Stanley Cup … assuming Rask is the real deal and if Horton can stay healthy — and if not, that Chiarelli finds a suitable replacement — the Bruins are primed for another run at the Cup. But let's face it: The magic inherent in winning all those Game 7s in 2011 and getting the performances they did out of Marchand, Thomas and others isn't easy to replicate.