Different players have different training regimens during the offseason. For example, some enroll in body-sculpting and diet-altering crash fitness courses, run by taskmasters like Gary Roberts. And others are Dustin Byfuglien. 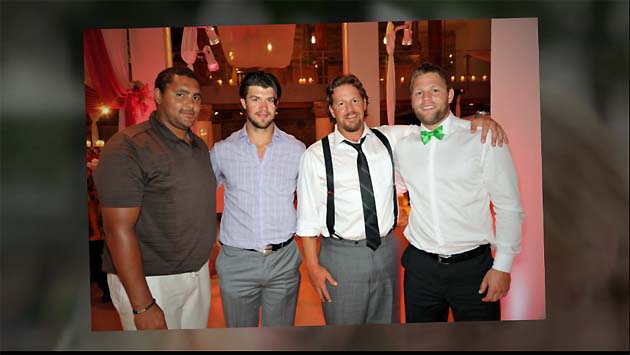 That's the Winnipeg Jets defenseman, putting the B-I-G in Big Buff at Dave Bolland's July 13 wedding, as captured by Jai Girard Photography in this (rather wonderful) slideshow.

Patrick Caisse of TVA Sports believes this image and one from Byfuglien's late July court appearance on that "careless boating" charge indicate that the former Chicago Blackhawks Cup winner has cleared the 300-pound threshold. Because, obviously, the best measure of tonnage is through still photography.

Questions of Byfuglien's commitment to conditioning have been lobbed about the city over the past year; entirely appropriate considering he rakes in 5MM+ a season while playing in over 24 minutes in TOI on an average night for a team that desperately needs him to be a difference maker. While it's evident that not every NHL hockey player will have the body of an Adonis, this photo of Byfuglien has him looking like he's on the plus-side of obesity.

Fact is, we're simply looking at Summer Byfuglien here. (And if anyone wants to write a "Grease" song parody with that title, we'll play it on the podcast.)

Please recall in 2011 when Byfuglien weighed in at 286 pounds when he was arrested in Minnesota, and a svelte 266 pounds when he reported to Jets camp. As defenseman Mark Stuart said last September: "When you look at him, you're not seeing a guy that's cut. That's not his body. Even if he wanted, he couldn't be chiseled."

What he does do is manage his weight as the season draws near. For a person his size, weight gain is going to seem more extreme than the same percentage of body fat gain for a smaller individual -- same with the weight loss. To wit, there are Instagram images of Byfuglien fishing in August that appear to feature a much different physique, one month later.

But this is just the Dustin Byfuglien fitness cycle, annually. Of course, not every year has an impending work-stoppage that could keep players off the ice for months. Might be a good time to remove the celery cap for Mr. Byfuglien …

Read the rest at: Dustin Byfuglien apparently not locked out of his refrigerator this summer (PHOTO)