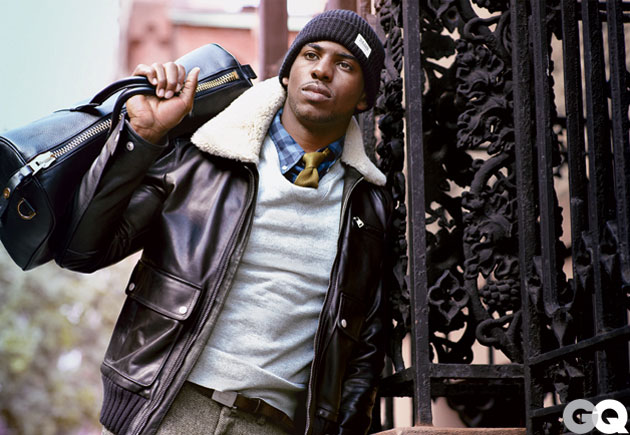 Los Angeles Clippers point guard Chris Paul is one of three famous faces gracing the cover of the October issue of GQ magazine, joining actors Denzel Washington and Javier Bardem. GQ's Steve Marsh profiled Paul in CP3's hometown of Winston-Salem, N.C., giving readers a fly-on-the-wall view of a party celebrating Paul's parents' 30th wedding anniversary, a glimpse into the comedic back-and-forth he's established with his wife and longtime partner Jada (who "will punctuate Paul's cutting one-liners with her textbook eye roll, equal parts coy and dismissive" throughout the anniversary party, according to Marsh) and a general sense that even after seven NBA seasons (which have included five All-Star appearances and four All-NBA nods) and last season's move to L.A., the 27-year-old triggerman is still just a family man at heart.

The profile also offers a bit of on-court insight, though, gleaned when Marsh watches Paul playing during a workout at the practice facility of Wake Forest University, where CP3 starred for two seasons:

CP3 plays pickup like he's Peyton Manning anticipating a blitz: The gesticulation is ceaseless. He was talking to everybody in the gym: the guys on his team, the guys on the other team, even the guys waiting for next. The only person CP3 never talked to was the guy guarding him, because CP3 says he doesn't believe in talking junk. "I feel like I've worked so hard to get good," he would tell me later, "I'm expected to score on you."

That's a pretty amazing and succinct encapsulation of the kind of confidence possessed by the truly elite — those in whom incredible God-given talent meets constantly diligent preparation. It's also sort of a different take once famously offered by enigmatic Italian soccer player Mario Balotelli, a gifted striker for Manchester City in the English Premier League.

When asked why he doesn't celebrate (or even smile) after scoring goals, Balotelli said, "When I score, I don't celebrate because I'm only doing my job. When a postman delivers letters, does he celebrate?" Paul's premise is a bit of a variation on that theme — it's not that there's no joy in scoring, but rather that there's simply no need to bark upon overcoming, because what's happened is less some amazing feat of conquering than the inevitable sum of a years-long equation. It's not a big deal that I scored; I'm supposed to, because do you even see how good I am?

(Which, in and of itself, sounds like pretty good trash talk to me.)

Of course, the idea that Paul "doesn't believe in talking junk" might be a bit of a news flash for Pau Gasol, whom CP3 famously called "soft" after a testy exchange in the closing seconds of a hotly contested January game between Paul's Clippers and Gasol's Los Angeles Lakers. In case you don't remember what all transpired in that fiery moment, I'll let Y! colleague Adrian Wojnarowski jog your memory:

Yes, Chris Paul called him soft. And, no, Gasol didn't want to hear it. Gasol hasn't forgotten the Lakers traded him for Paul, and he hasn't forgotten most fans — and maybe most coaches and teammates, too — wish the NBA hadn't voided the deal. He doesn't forget it, and maybe this has something to do with him reaching down, patting Paul on the head late Wednesday and sending him into an absolute tirade.

"Don't touch the top of my head like I'm one of your kids," Paul seethed later.

As Marsh found out, Paul remains pretty ticked off about that whole thing:

Gasol made a tepid apology; six months later, Paul is still annoyed. "We call that sonnin'," he explains to me. "Like when I take Li'l Chris to the bathroom, I'll walk with my hand on his head. That's my son. You know what I mean? I understand that Gasol is that tall, but don't do to me what I do to my son."

Read the rest at: Chris Paul tells GQ why he doesn’t talk trash, still doesn’t want you touching his head