Shuffle Up: With Carlos Ruiz down, let’s find you a new catcher 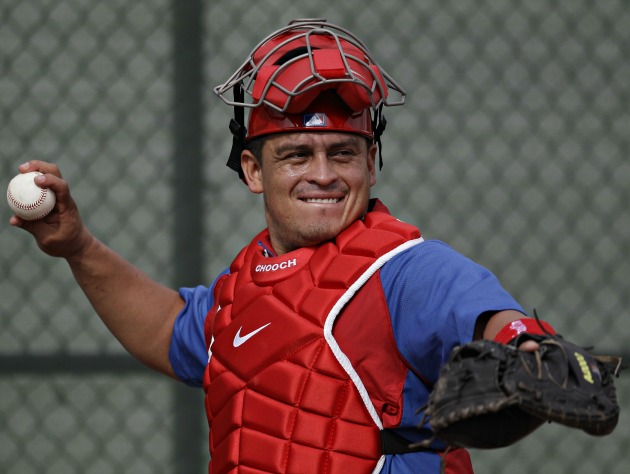 As the calendar shifted to August, we had a terrific horserace shaping up for the Best Fantasy Catcher title. Yadier Molina, Carlos Ruiz, Buster Posey and Joe Mauer are all hitting .315 or better, three of them are showing power, all of them have good run-production stats (relative to position), and some of these guys even steal an occasional bag. They're all in the Top 85 in the Yahoo! game.

Sadly, it's shifted into a a three-man race to the finish line. In a roto year riddled with injuries, you can now add Chooch Ruiz to the list. Bad news on the doorstep.

The Phillies announced early Saturday that Ruiz is down for 4-6 weeks. He's dealing with plantar fasciitis in his foot, a nasty injury for anyone but especially a catcher. The Phils won't provide much to the roto pool by way of replacement; Brian Schneider and Eric Kratz are the leftover backstops.

With Ruiz off the board, it's time for an emergency Mini-Shuffle. Let's rank all the mixed-viable catchers here; let's help you figure out your next backstop move. .

Here's a quick refresher on the rules. We're ranking 5x5, rotisserie style, rest of 2012 only. What's happened to this point is merely an audition. If you're on the DL or in the minors, you're not eligible for this list. Don't obsess over the prices in a vacuum - focus on how the players relate to one another. Commodities at the same price are considered even.

I'll add comments shortly, and reserve the right to tweak this list as the day goes along. And later this weekend, we'll shuffle the men on the mound.

Buster Posey is such a dynamite hitter, you wonder if the Giants will eventually decide it's worth taking him out from behind the plate, full-time. Obviously you lose the positional advantage Posey brings as a backstop, but you'd hate to see him physically beaten down by the demands of the position. … Here's another reason why I love Yadier Molina: he suffered a jammed thumb this week and was questionable to plau Friday, but he winds up starting and stealing two bases. Many baseball observers (Keith Hernandez, for one) have noted that just about anyone could steal 15 bases a year if they really wanted to. Molina is proof of that. … Okay, I did a lot of smack talking about Carlos Santana's extended slump. He's woken up nicely, going ballistic over the last month. Welcome back. Is it a matter of finally getting healthy? A confidence boost? Sometimes we never know the whys and why nots. Does anyone really know for sure what torpedoed Adam Dunn last year?

It's far too early to say Jesus Montero can't handle the mental demands of the DH position, but we have to note that he's slashing .306/.344/.472 when behind the plate, compared to .222/.270/.333 as a hit-only player. And like most seattle players, he's a completely different guy on the road (.603 OPS at Safeco, .784 elsewhere). His K/BB ratio shifted into a good place during his .300 July, an encourage sign. He was getting himself out for most of June. … It's been a weird, if productive, year for Jarrod Saltalamacchia. Lefties own him, for one thing, and while he's batting just .217 on the road, he does have 10 homers there. And now he has to deal with the presence of Ryan Lavarnway. It might be a good time to cash out on Salty while the market is still there.

I hope you caught A.J. Ellis trending on Twitter Friday night, sparked by Vin Scully and Nancy Sinatra. I don't know who the No. 2 baseball announcer of all time is, but Scully is the unquestioned No. 1. … You have to wonder how much the 2008-2009 workload took out of Kurt Suzuki's offensive game. I still think he's a good addition for the Nationals, but I miss the stud we saw a few years ago. Maybe the A's ran him into the ground.

Read the rest at: Shuffle Up: With Carlos Ruiz down, let’s find you a new catcher