Closing Time: Where does Yu Darvish go from here? 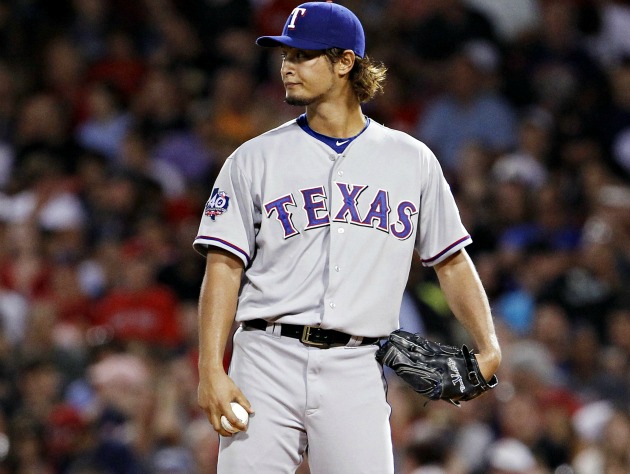 We're going to play it straight with today's Yu Darvish lead. No puns, no buzz, no outlandish statements. Right now, he's just another name pitcher struggling to put things together, and the fantasy community is struggling to figure it out as well.

The Red Sox were the latest team to knock Darvish around, collecting 11 hits and six runs against him over 6.2 innings Monday at Fenway. Darvish walked four, struck out nine. He's had four crooked-number starts in his last five appearances, pushing his ERA up to 4.57 and his WHIP up to 1.46.

Some misconceptions have crept into the Darvish discussion of late, things we need to clear up as we go under the hood. Let's get our facts straight on a few things:

-- The home ballpark isn't causing Darvish's poor year. His ratios are 4.55 and 1.32 at home, 4.59 and 1.59 on the road. The strikeout rate is almost the same in both locations. He's allowed more homers at home, he's walked a lot more men on the road. Mash it all together and it's basically a wash. It's not Arlington's fault.

-- Bad luck isn't driving the story. Okay, to be fair, the ERA estimators all spit out better numbers than the current 4.57 ERA he's carrying around. Darvish currently has a 3.80 estimate from FIP, a 3.90 xFIP, a 3.90 SIERA and a 4.45 tERA. None of those resting points would make him a mixed-league star, even with all of his strikeouts, but better is better.

Let's look at some of the luck stats individually. Darvish has a .312 BABIP, 21 points above the AL average. That's unfortunate, but it doesn't make him the black cat of the decade. His strand rate (70 percent) is an eyelash under the league mark of 72.6 percent. His HR/FB clip (10.4 percent) is 1.1 percent under the mean. None of these meters are significantly out of whack, and the last number is actually a shade lucky.

The most puzzling part of Darvish's disappointing year has been his bloated walk rate; his control was impeccable during his five Japanese seasons. While his K/9 has actually gone up in America (from 9.5 to 10.3), the free-passes have spiked to a level no one expected (1.9 to 4.97). Here's where we have plenty of theories and no obvious answers. Is Darvish not getting consistent calls on borderline pitches? Is he giving MLB hitters too much credit? Are batters doing a better job of solving Darvish after they see him a few times? The O-swing percentage against Darvish (hacks out of the strike zone) is right around the league average, a notable disappointment when you consider how much his pitches move.

The schedule isn't letting up for Darvish - his next three turns are versus Detroit, at Toronto and against Baltimore. At least he draws Rick Porcello in the Tigers turn, not Justin Verlander. For all of Darvish's ups and downs, he's managed to pull 11 wins out of his 21 starts. He's enjoyed 5.24 runs per start, the 11th-best support in the majors. And he's snagged wins on three occasions where he didn't complete the sixth inning.

You're on your own with Darvish for the rest of the year. He's not on any of my teams and I doubt that changes down the stretch. If you need the strikeout upside, at least he provides that. The supporting cast is strong around him, not that it solves everything (looking at you, Roy Oswalt; worried for you, Ryan Dempster).

But let's not forget the righty is still two weeks from his 26th birthday. He's going to make adjustments and should get appreciably better someday, even if it's not in 2012. Keep in mind he's still getting used to the five-man rotation in America; he worked every sixth day in Japan. You might get a nice value on Darvish next spring, when you no longer have to pay a buzz upgrade. Discuss your expectations, today and tomorrow, in the comments. 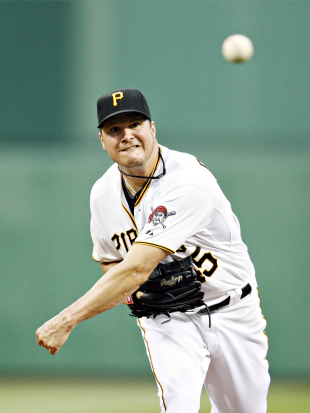 • If you want a location-driven roto pitcher for your roster, look at Erik Bedard in Pittsburgh. He posted nothing but bagels against the Diamondbacks on Monday, pushing his home ratios down nicely (2.38 ERA, 1.06 WHIP). He's allowed just one homer at mistake-hiding PNC Park. The numbers get ugly when Bedard works out of a suitcase: he's a 6.75 ERA and 1.76 WHIP man for road starts, where he's served up 10 homers over 54.2 innings.

The Pirates just kicked off a lengthy homestand, so Bedard is trustable for the next couple of weeks. He'll draw the Padres (yes, please) on Saturday, and the Dodgers visit PNC Park after that. The erratic lefty is ready for pickup in 73 percent of Yahoo! leagues.

• Every club in the majors is going to give us some mixed-league players to consider, even the dreadful teams. That's why we discussed Houston's Brett Wallace last week, and that's why we'll talk about Justin Maxwell now. The Astros are letting the 28-year-old outfielder settle into a regular job, and he's posted some respectable numbers (12 homers over 190 at-bats, 32 runs, 19 walks, .511 slugging).

There's a significant platoon split that mucks up the story somewhat: Maxwell is a .294/.402/.574 slasher against lefties, but just a .230/.282/.475 bat against the righties. Obviously we live in a right-handed world. But Houston seems committed to playing him most of the time anyway, and he's not a bad category juice play (note two steals in the last three games, and a 15-for-19 rate for his brief career) if you're in a deeper pool. Maxwell's Silver Hammer is an unowned commodity in 98 percent of Yahoo! leagues.

• The Rockies enjoyed a rare night of strong pitching, parlaying that into a 2-0 win at Chavez Ravine. Meanwhile, Jim Tracy earned our wrath by sitting Josh Rutledge, Wilin Rosario and Tyler Colvin (okay, it was against a lefty starter, Chris Capuano). Colvin should be in line for regular at-bats now that Michael Cuddyer and Todd Helton are hurt (Helton's out for the year), but I'm not making any hard assumptions where Tracy is involved. Here's hoping the team cleans house, top to bottom at the end of the year.

Speed Round: Bruce Bochy is prepared to go full-committee with his bullpen, which is good news for lefty Jeremy Affeldt and bad news for struggling righty Santiago Casilla. Right-handed Sergio Romo should also see some chances here and there. … Mike Moustakas was given the night off Monday, partly due to his sore knee and partly due to the presence of Chicago lefty Chris Sale. … Andrew Bailey (thumb) is amping up his rehab, set to pitch back-to-back games later this week at Triple-A Pawtucket. He might be with the Red Sox next week. … Brett Jackson's second MLB game wasn't much fun: four strikeouts. He had 158 whiffs at Triple-A Iowa, the biggest fly in the ointment. … Ben Sheets went the pitch-to-contact route at Philly: 7.1 IP, 7 H, 1 R, 1 BB, 0 K. With a K/BB ratio over three, I'll give him the benefit of the doubt going forward, and certainly at New York this weekend. … After a brief lull on the bases, Mike Trout got back to work: three swipes at Oakland. … Joey Votto (knee) is running at close to full speed, which means he's probably close to a rehab assignment. … As feared, Matt Garza (elbow) is out indefinitely. Given where the Cubs season is headed, I'm not confident he pitches again in 2012. … John Axford retired five of six Cincinnati batters en route to the rarest of all things: an undramatic save. Busy Clippers, you win again.

Read the rest at: Closing Time: Where does Yu Darvish go from here?