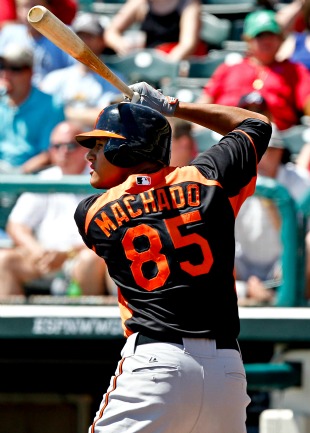 No one doubts Manny Machado is headed for greatness eventually. The Orioles young shortstop was the third overall selection in 2010's draft, and he ranked 14th and 11th on Baseball America's prospect list the last two years.

Can Machado make a significant impact right out of the box in the majors? That's where I have my doubts.

Baltimore provided the biggest fantasy splash from Wednesday, though it came around the midnight hour. Machado, just one month removed from his 20th birthday, is headed to Baltimore. You have to figure he'll play most of the time (if not daily) with the parent club; otherwise, why bring him up? Thursday night is a boffo night for Beltway Debuts: Robert Griffin III makes his first preseason start at 7 pm ET (at Buffalo), and the Orioles host the Royals a half hour later.

Machado's promotion is a two-level jump; he's spent the summer at Double-A Bowie. He was more of a Diamond Dog than Ziggy Stardust at that stop: .266/.352/.438 slash, 11 homers (and 26 doubles), 13 steals in 17 attempts. He's knocked in 59 runs and scored 60. His roto haul at this level is similar to what Starlin Castro, Mike Aviles and Ben Zobrist have done in the majors.

The learning curve is different for every prospect, obviously, and there's a wide range of outcomes for Machado as he makes his first go around the majors. Maybe he'll be one of the rare kids who hits the ground running and produces right away. That's not how I'm going to bet, but it's possible. Remember Mike Trout did next to nothing in his 2011 debut, and for all the sunshine thrown at Bryce Harper this summer, his line is a modest .251/.331/.411. Baseball is hard, especially at the major league level.

I don't need to tell you Machado is a dynasty-league gem and an AL-only pickup — you know that already. That doesn't pass as analysis. My strategy on Machado is to pick him up in a mixer if you have a spot to play with, someone you can drop with no real consequences. Willie Bloomquist? Cut city. Pedro Ciriaco? Done. But I would not drop Jose Altuve for Machado (as someone asked about on Twitter), or Omar Infante, or even Stephen Drew. This is my round-about way of saying I expect modest returns from Machado in 2012. Let's try to keep both cleats on the ground here. In a non-keeper league, today might be the best time to trade Machado.

If he proves me wrong, fine. Wouldn't be the first time. If I were doing a fresh Shuffle Up for infielders right now, I'd have Machado somewhere in the $5-7 range. Please share your prices, projections and expectations in the comments.

• It was death by 1,000 cuts as the Giants pasted the Cardinals, 15-0. San Francisco rolled up 11 singles among its 15 hits, though Marco Scutaro had no trouble reaching the gaps (single, double, grand slam), en route to seven RBIs. Brandon Belt collected two hits for the third straight game, but I'm sure Bruce Bochy will bench the kid as soon as he gives us another 0-for-4. 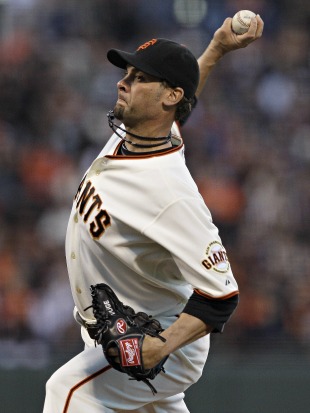 Ryan Vogelsong enjoyed the support and rolled to an easy victory, his tenth. He's now carrying a 2.27 ERA and 1.11 WHIP on the year, laughing at the Spreadsheet Police for the second consecutive summer. Vogelsong's 2.71 ERA last year was far ahead of his FIP and xFIP (3.67 and 3.85, respectively), and this year the gap is even wider (2.27 front door, 3.68 and 4.41 on the graphs).

To be fair, Vogelsong's emergence as a fantasy stud has been enhanced significantly by AT&T Park. He has a 1.85 ERA and 1.12 WHIP at home since rejoining the league in 2011, as opposed to 3.40 and 1.29 numbers on the road. But in 2012, the ratios have improved in both locations.

I see the obvious caveats to the story: Vogelsong's HR/FB rate has been low with the Giants and his strand rate is 84.2 percent this year. His strikeout rate is ordinary, less than 7/9. That .246 BABIP isn't going to last forever. But now that we're more than a year and a half into the story, I have no problem sitting back and enjoying the ride. We'll worry about the regression talk next year; I'd be shocked if Vogelsong turned into a stiff down the stretch. The schedule is a dream over the next couple of weeks: two home starts, along with trips to San Diego and Houston. No worries, mate.

• It's hard to take a 10-game relief sample as anything significant, but Heath Bell seems to have righted the ship in the second half. He's worked nine scoreless innings since the break, with eight strikeouts against just three walks. And Ozzie Guillen seems ready to give Bell another look in the ninth inning.

This seems patently unfair to Steve Cishek, who has been lights out as Miami's temporary closer, but the Marlins have to think about the future. Maybe they're looking to showcase Bell for a potential waiver deal. Maybe they're dreaming of a way to get Bell's bloated contract (three years, $27 million in all) off the books this winter. Maybe this is Ozzie just being Ozzie.

I'm not dropping Cishek anywhere I have him, that much is true. Bell will have to show me some bagels in the ninth, a bunch of them, before I buy into him to any degree.

• Paul Maholm (48 percent) is my streaming pick for Friday, on a nifty run (1.72/0.93 last month) and starting at New York. He's going to love the new setup with the Braves: better defense, a bump in run support, stronger bullpen. If you're a little more on the daring side, perhaps you can go back to Homer Bailey (35 percent), who's up against the Cubs. I'll stay away from Brandon McCarthy just off the DL and at Chicago no less, and Ervin Santana is no interest to me, even against the Mariners. Scott Feldman's recent stats are pretty, but I'm not messing with Arlington in August.