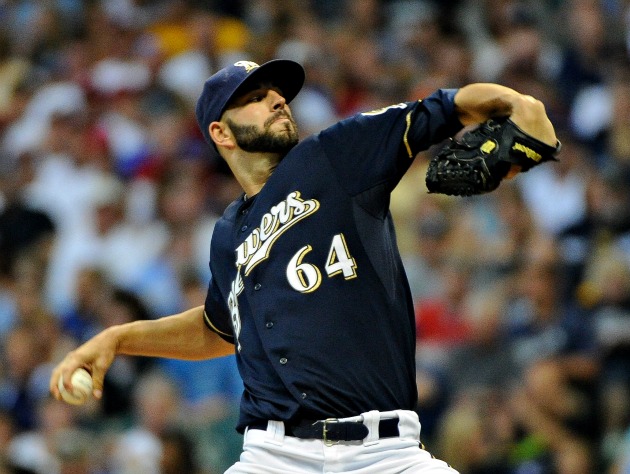 Some Closing Time editions have a dominant theme, and some CT versions are more about quick hitters and shorter stories. The fresh edition follows the latter theme, so get the bulletry ready and let's jump all around the league.

• Here's what I'd like to know about Milwaukee right-hander Mike Fiers: how did he have a 4.42 ERA through 10 Triple-A starts? He's amped up his game in the majors (1.80 ERA, 1.01 WHIP), pushing up his strikeout rate and trimming his walk rate. He was especially on the mark during Tuesday's victory over Cincinnati (8 IP, 3 H, 1 R, 0 BB, 7 K, perfect game into the seventh), out-dueling Cy Young frontrunner Johnny Cueto. Here's some scouting video to start off your morning; add some milk and fruit as you see fit.

Some of the usual luck signs are flashing with Fiers: he's stranding runners 83.6 percent of the time and his HR/FB clip is a tiny 3.3 percent. The FIP estimation checks in at 1.80, while xFIP pushes up to 3.37 and SIERA is at 3.23. And it's not like batters never square this guy up: Fiers is allowing line drives 27.3 percent of the time, a lofty clip.

A simple regression call is never a full answer; if I had to pick an over/under ERA for Fiers from this point, I'd go with something in the mid-3s. His next turn is a dangerous one, a thin-air assignment in Colorado. Philadelphia (home) and Pittsburgh (road) follow after that. What's your call on this one, Fiers Nation? Are you selling or holding?

• Ryan Dempster's debut with the Rangers was a hot mess, but he made amends with Tuesday's win at Boston (6.2 IP, 6 H, 3 R, 0 ER, 1 BB, 6 K). If not for an Ian Kinsler miscue in the seventh inning, Dempster would have posted seven clean bagels. Two-thirds of his pitches were strikes, and he helped his own cause with a Carl Crawford pick-off. Nice comeback, big guy.

The assignments won't get easier, as the AL East Tour continues. Dempster is at New York next Monday (no way I use him there) and then he heads to Toronto for the weekend (let's see how healthy the Blue Jays are by that day). Minnesota and Tampa Bay close out his month, with both of those turns coming in Arlington. In most mixed leagues, I'm fine to let Dempster be someone else's problem. His skill set doesn't translate favorably to Rangers Ballpark (right-handed arm with a fly-ball bias).

Texas rookie Mike Olt had another uneventful day: 0-for-2, one walk, two strikeouts. He's yet to collect an extra base hit through four games, though he's seeing plenty of pitches (three walks, four strikeouts). Two-thirds of his plate appearances have come against left-handed pitching, and he's yet to bat higher than eighth in any game. Bottom line, he's just a part-time member of this lineup right now, and I don't see any reason he has to be owned in standard mixed leagues. 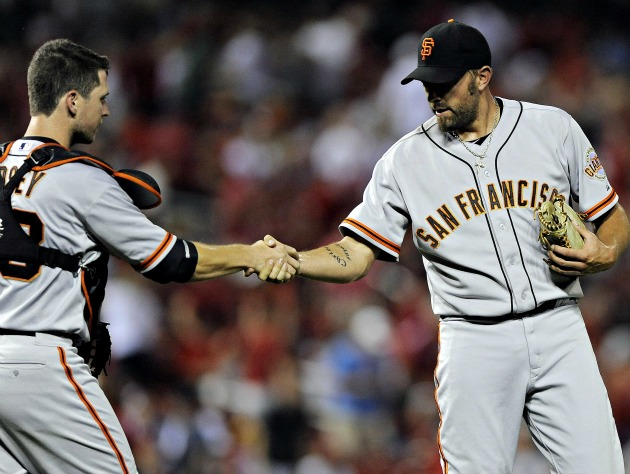 • Giants manager Bruce Bochy has been uttering the C-word this week, and struggling reliever Santiago Casilla apparently is the man left behind. Bochy didn't drop Casilla's name when the particulars were being disclosed before Tuesday's game, and then the skipper used Sergio Romo (set-up) and Jeremy Affeldt (final four outs) to put away the Cardinals.

Affeldt didn't have to navigate the meat of the St. Louis order — he faced Jon Jay, Rafael Furcal, Matt Carpenter and Daniel Descalso — but a handshake is a handshake. He'd be my clear roto choice in this bullpen if I had pick of the litter today, no questions asked. It seems like the Giants are finally ready to wash their hands of Casilla (he's been terrible for two months), and Affeldt offers the perfect mix of effectiveness (2.56/1.14) and durability. Romo and lefty Javier Lopez also figure to see chances, here and there.

• Is the pixie dust starting to wear off for Indians closer Chris Perez? He was just about untouchable over four dazzling months, but he's suffered two horrific blown saves over the last three games (1.1 IP, 7 H, 8 R, 6 ER, 1 HR, 3 BB, 1 K). The horse has already left the barn on Cleveland's season, at 50-60, so there's no immediate pressing need to change the ninth-inning routine. But if and when Manny Acta wants to consider a switch, eighth-inning man Vinnie Pestano (1.29 ERA, 0.94 WHIP, 57 Ks in 49 innings) would be an outstanding choice.

• The Rockies scored another surprising victory at Los Angeles; where did this pitching come from? The Dodgers have just one run through the first 18 innings of the series. Josh Rutledge (four hits, three RBIs; you know all about him) and Eric Young (3-for-4, two runs) did the damage at the top of the Colorado order.

Young would be an intriguing roto commodity if we knew he'd play all the time: he has a .295/.364/.380 slash over 129 at-bats (that plays at the leadoff spot), and he's stolen 12 bases and scored 28 runs in his limited action. But you know how it goes with skipper Jim Tracy — Young is probably one collar away from returning to the bench. If Young gets a firm endorsement at any point this month, be aggressive on your waiver wire. He's currently unowned in 99 percent of Yahoo! leagues.

• Wei-Yin Chen (46 percent) looks like the best streaming option for the Thursday slate. He's been untouchable for a month (1.95 ERA, 0.96 WHIP) and he's at home against the Royals. Joe Saunders (14 percent) might sneak up on some people, working at lefty-favoring PNC Park. I'm not interested in Clay Buchholz at Cleveland (been burned too many times before) or Mike Leake at Chicago (three missteps in his last four turns). 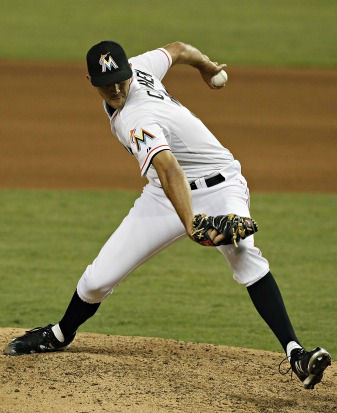 Speed Round: Chris Johnson does not have a power-hitter's profile (.433 slugging percentage over 312 pro games), so his mad run with Arizona (10-for-29, five homers) makes little sense. Obviously you'll roll with it while it lasts, but keep him on a short leash. … I'm surprised Steve Cishek is still unowned in 60 percent of Yahoo! leagues. His elite ERA (1.74) and strikeout rate (one per inning) will help anyone, and his 1.22 WHIP is fine as well. He's converted six straight save chances since the middle of July, and he hasn't allowed a run since late June. How much evidence do you need to see? This is legit. … Greg Holland had an easy handshake against the White Sox, getting three fly outs (one to the track) in a 5-2 victory. So long as he keeps throwing strikes, he should be fine. … With John Axford needing a day off (he recorded five outs on Monday), the Brewers led Calgary native Jim Henderson close out the Fiers win. Henderson was originally property of the Expos, drafted in 2003. He's been effective in his first taste of MLB life, working six sharp innings (6 H, 2 R, 1 ER, 0 BB, 8 K). If The Axman loses his way again, perhaps Henderson will get the call before Francisco Rodriguez or Kameron Loe. Clip and save, eh? … Brandon Belt had two singles, two steals and a run scored at St. Louis, which will probably earn him the bench in the World of Bochy. The Giants reportedly are kicking the tires on Lyle Overbay, recently designated for assignment by Arizona. … Although the Red Sox haven't made a commitment to Franklin Morales yet, he's been "penciled in" as Saturday's starter at Cleveland. Morales has a 3.06 ERA in six starts this year, with 11 walks against 35 strikeouts over 32.1 innings. What's the hold up, Bobby V? You're not exactly coaching the 1971 Orioles; you could use some help in the rotation.