Closing Time: Josh Rutledge, hacking it in the majors 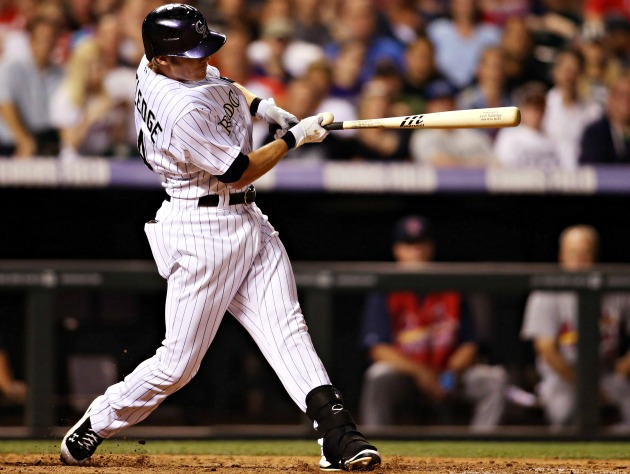 One of the tricky elements to writing this column is the understanding that it goes out to a wide audience of roto players, people competing in many different formats. There's no one-size-fits-all when it comes to fantasy advice. A deep sleeper might not hold any value in a shallow mixer, and the hot property in a smaller league was likely drafted or picked up weeks ago (if not months ago) in the penetrating formats.

I try to vary the ownership levels on the players promoted, and hope that readers will understand how variable the landscape is. But there's no one right way to do it.

With that theme in mind, I was surprised when I glanced at Josh Rutledge's file and saw an ownership level of just 29 percent. He's been profiled by my colleagues and I on several occasions, and you'll find him regularly promoted and celebrated in the comment threads. If you're a long-standing member of the Rutledge Youth, feel free to skip to the next item; this lead is going to be a review for you. You've already done your job. We're trying to reach the undecideds in the crowd, the other 71 percent of the gamers.

Rutledge is using a "see the ball, hit the ball" approach since joining the Rockies three weeks back, and it's working for the rookie shortstop. He's off to a terrific .375 start with four homers and three steals over 18 starts, and he's gone deep in each of the last four games. Jim Tracy was reluctant to use Rutledge near the top of the lineup initially, but Rutledge now owns the No. 2 slot in the order with the departure of Marco Scutaro (and the Alabama product is 10-for-23 since that switch was made). There's nothing lacking in the splits, either: everything looks good against righties and lefties, home and away.

All that sunshine up front, you can't help but wonder how the league is going to adjust to Rutledge in the coming weeks. He's only walked twice since joining Colorado, and his plate-discipline numbers were shaky at Double-A (3.7 percent walk rate, 18.2 percent strikeout rate). He's offering at pitches outside the strike zone 38.4 percent of the time, well over the league average of 30.4 percent. Why throw this guy a strike if he'll hack away at a ball? And everyone knows a .379 BABIP isn't likely to hang around.

Those caveats established, we can't ignore all the positive elements to the story. Despite his free-swinging ways, Rutledge was plenty productive at Double-A (.306, 13 homers, 14 steals), and the thin-air backdrop of Coors Field is a wonderful thing. And while you never want to make absolute assumptions on anything related to the Colorado lineup (queue up the Tracy Rant), Rutledge should have a full-time gig to himself for the rest of the year; if and when Troy Tulowitzki returns to the lineup, Rutledge can shift over to second base (where he's played 22 minor-league games this year). Dual-position eligibility would be much appreciated, as second base has been a fantasy mess in 2012.

Kick the tires on Rutledge this weekend, see what you make of him at Coors Field. The Rockies won't be as much fun next week, visiting Los Angeles and San Francisco for three games apiece, but there's another full homestead waiting for us in the middle of August. Widely-owned commodities I would immediately drop for Rutledge, all else equal, include J.J. Hardy (68 percent), Mike Aviles (67 percent, not healthy), Dustin Ackley (44 percent, confidence shot right now) and Jemile Weeks (32 percent). Go run your own internal roster audit before it's too late.

• If you started Jered Weaver earlier this week and got away with it, consider yourself fortunate. The grand ballpark in Arlington showed its teeth during the Anaheim-Texas series, taking down several name pitchers in its destructive wake. The Rangers scored a 15-9 win (and a series split) on Thursday, and for the week the teams combined for 76 runs. That's obscene. 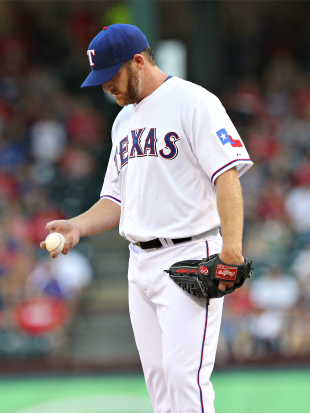 I've seen some industry pundits still fairly optimistic on Ryan Dempster in Texas, but I'm not buying it. We're talking about a 35-year-old righty who's making his first extended trip to the AL (in an Offensive Disneyland), and he's trying to do it in the midst of a career-low ground-ball rate. While everyone loves taking cuts in Arlington, it's a park that favors lefties most of all — more bad news for the right-handed Dempster. Crooked numbers at home are on the way. (This is a quick recap of all the Dempster angles we discussed back on Tuesday; click back for the extended play, if you so desire.)

Dempster and C.J. Wilson both allowed eight runs in Thursday's batting practice, and Derek Holland, Yu Darvish and Garrett Richards were kicked around earlier in the week. Joe Nathan allowed three homers in the series and Ernesto Frieri gave up two. Hide the ERAs and WHIPs as you walk through the turnstile, amigos.

Wilson at least gets a reprieve from the schedule next week, working in Oakland. It's safe to activate him again. I can't recommend the Dempster turn at Fenway Park.

• At first glance, Mike Minor couldn't have asked for a better setup. He was working at home against the Marlins, the worst-scoring team in the majors. The Braves rolled up six quick runs over the first two innings. Another easy victory for the Stream Police; smiles everyone, smiles.

Alas, there's no retractable roof over Atlanta's ballpark. The rains came in the fourth inning and caused a lengthy delay; the Braves did the prudent thing and removed Minor when the game resumed. His line doesn't jump off the page (3.2 IP, 2 H, 0 R, 2 BB, 1 K), but bagels are bagels. Trust the process, keep making good decisions, amigos.

If you want to gang up on the Marlins again, give Jon Niese a look when he opposes them Tuesday. Minor also works that day; he's up against an unthreatening Philadelphia offense, but he also has to deal with Cole Hamels on the other side. (Hey, Ross Detwiler beat Hamels on Thursday. He's not infallible.)

• Normally they don't throw you a parade for a quality start against Minnesota. The midwestern men of Gardenhire are 14th in the majors in scoring, an ordinary club. But the Jon Lester apologists are singing the lefty's praises this morning, noting his solid line in a losing effort (8 IP, 7 H, 3 R, 0 BB, 7 K). It's obviously a major step forward from the horror show Lester showed us in the previous four turns (12.27 ERA, 12 walks, 7 HR, .377 BAA). And to be fair to the Twins, they do step up in class against southpaws (they're eighth in OPS versus left-handed pitching).

The schedule isn't easy for Lester going forward: he sticks in Fenway for the Rangers, then ships to Cleveland and New York after that. I'm glad he's not on any of my mixed-league rosters, and I'd be looking to sell his Thursday outing if I did own him. What's on your clipboard? 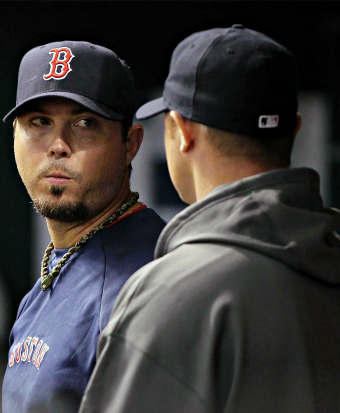 Speed Round: Josh Beckett (back) probably won't start this weekend. If you have a tee time with Beckett, that's probably still a go. … Giancarlo Stanton (knee) has picked up a rehab assignment and he went 2-for-5 with a homer Thursday. Hey cool, he can hit Class-A pitching. … Back spasms are holding Justin Ruggiano out of the lineup, and he's no sure thing to play this weekend. … The Royals are planning on using Jeff Francoeur this weekend after letting him rest for a few days, essentially to clear his head. If Jarrod Dyson pushes back to the bench to make room for Frenchy, it's a shame; Dyson's on an 8-for-14 binge over his last four starts, with four runs and three steals. … Yadier Molina has a sprained thumb and didn't play in the finale of the Colorado series. If this is a significant injury, I'm going to run into freeway traffic. Lance Berkman is also nicked up — he limped off the field late in Thursday's game — which might eventually serve to protect Allen Craig's playing time. … Dan Haren (back) was scratched from his Arlington turn this week, a happy accident. He's been pronounced fit enough to go Sunday at Chicago — obviously not an easy assignment, but a net gain in the end. … The Rays, lacking in iambic pentameter, have recalled Will Rhymes. Those guys think of everything.

Read the rest at: Closing Time: Josh Rutledge, hacking it in the majors