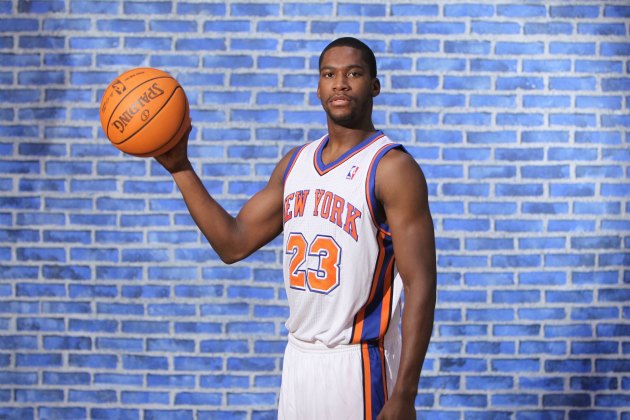 In three years with the New York Knicks, combo guard Toney Douglas made an impression as a talented but endlessly frustrating player. He made poor decisions, took bad shots, and generally didn't follow through on the expectations that Knicks fans had for him. In time, he became most useful as a target of derision, especially given his amazing catchphrase "Do What Toney Douglas Do."

Sadly, Douglas will no longer serve as fodder for the New York media/internet elite after being moved to the Houston Rockets as part of a sign-and-trade deal for Marcus Camby. That's good news for Douglas as he tries to change his career path. He's also happy, though, because he's now able to save a lot of money on rent. As transcribed from a very long interview with John & Sean of 1560 The Game in Houston (via ClutchFans):

"Listen, this is ridiculous. When I was in New York, my apartment cost almost $4000 a month. … That doesn't include parking. … When I got here, I was so excited. … I didn't really appreciate the South until I was in New York."

Douglas makes a good point. While that $48,000 in rent didn't make up a huge percentage of his $1.1 million salary for the 2011-12 season, it is still a pretty ridiculous amount of money to spend on a place to live. In Houston, he can probably get a place of similar quality for at least half the cost. And while it's easy to joke that said home will be in Houston and not New York, it's not as if Douglas is now playing in the Ozarks. There's plenty to do in Houston, or so I'm told.

It's not as if Douglas was hurting financially by playing in New York, but it's worth noting that not all contracts have the same value depending on factors like rent. For instance, a second-round pick who gets drafted by the Golden State Warriors will end up spending a lot more money than one who ends up with the Minnesota Timberwolves, just because basic things like food cost more in the Bay Area. These things matter, even if they don't change the fact that professional athletes make plenty of money regardless.

Read the rest at: Toney Douglas is happy not to pay New York City rent