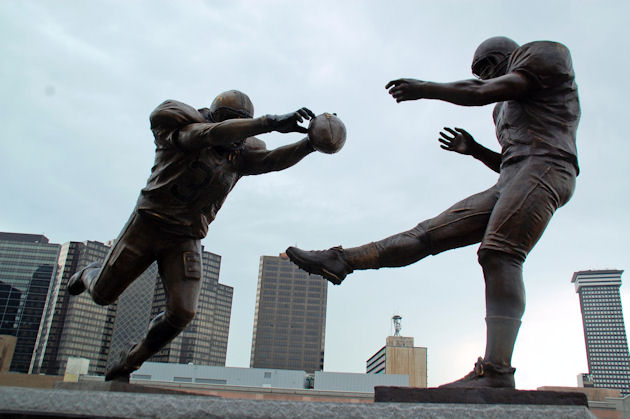 The new "Rebirth" statue that sits outside of the Superdome is beautiful, but not entirely accurate — the punter on the losing end of things is not identifiable as an Atlanta Falcon. He is logo-free and nameless.

In reality, the punter experiencing the punter's nightmare was Michael Koenen, then of the Atlanta Falcons. Koenen, to his credit, tweeted about how much he appreciated being part of the statue. The tweet was directed to Steve Gleason, the man who blocked the punt:

Awesome day for an inspirational man in @team_gleason God bless you in your fight partner!! Half of me likes your statue;) #Lifebeyondsport

The Falcons have been accused of not being so gracious about the statue. Since their logo appears nowhere on it, it appeared that they weren't particularly excited to have themselves memorialized forever outside of a rival's stadium, getting their Falcon brains beat in. If you don't remember the 2006 game, the text underneath the statue explains:

On Monday, September 25, 2006, Steve Gleason was responsible for one of the most dramatic moments in New Orleans Saints history. He blocked a punt in the first quarter of the team's return to the Superdome following Hurricane Katrina. That night, the Saints defeated their rival Atlanta Falcons, 23-3. It would kick-start an improbable run for a team that would go on to win the NFC South crown and play for the NFC Championship that season. That blocked punt, that season, symbolized the "rebirth" of the city of New Orleans.

And as it turns out, the Falcons felt no particular need to be a part of the statue. They're supportive of the statue, but can live without their logo existing on it, since it depicts them losing. Badly. Team president Rich McKay explained to Pat Yasinskas of ESPN.com:

"...we all understand how important the moment was for the city and what they had gone through. We all lived in that moment and it was a pretty special thing. Even losing, it was still a pretty special thing. But it was just something that when we talked to the league about it, we said we didn't think it was appropriate to put the marks on it. Everybody knew what the game was. Everybody knew what the moment was.''

I don't find that to be an unreasonable stance. In fact, I think it's even preferable. If you're a Saints fan, you know what that moment was about. You know how special it was. It was sports intersecting with real-life tragedy, and for one second, making things seem not so bad. It was an unforgettable moment. It was about the Saints and it was about New Orleans.

Why put a Falcons logo on there and make it even a little bit about the Saints vs. Falcons rivalry? As far as the statue goes, Koenen is just a placeholder. The Atlanta Falcons are nameless, faceless extras. They're the Washington Generals on that play. Insisting that Koenen and the Falcons be a part of that statue would be like insisting that the Rocky statue also include a bloody, face-down Apollo Creed. It's just not why we're here.