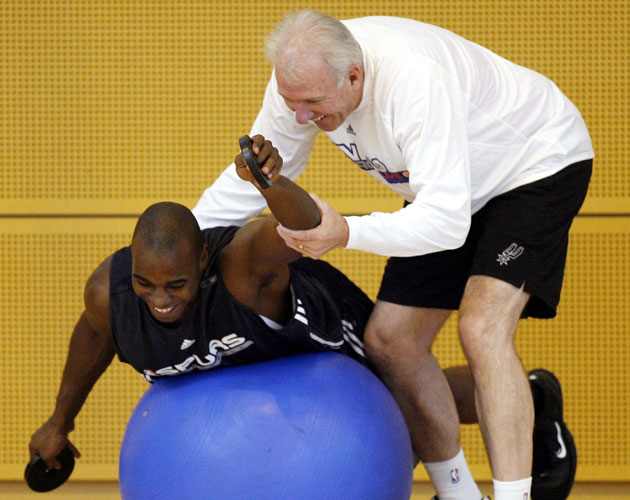 A plucky, athletically challenged former NBA point guard has been named the head coach of an NBA team. Shocker, we know. Next thing they'll tell us is that an NHL coach has been fired a week into the season, the offensive coordinator from the NFL's best team will be hired to be the head coach for a four-win squad, and a third basemen that you kept finding over and over in your 1991 Donruss packs has been hired to coach a Major League Baseball team.

Jacque Vaughn always looked like an NBA head coach in waiting, even all the way back in his formative years with the Kansas Jayhawks in the mid-1990s. By the time Vaughn was drafted by the Utah Jazz in 1997 — coming off a trip to the Finals and featuring John Stockton and Howard Eisley already in the fold — we all should have been placing bets on what year he would get his own team. Considering that Vaughn never was much as an NBA player, I probably would have picked "2008" in the pool, back in 1997. To Jacque's credit, he hung around for 12 NBA seasons before retiring in 2009; before taking a year off, and spending two seasons as an assistant coach under San Antonio Spurs head man Gregg Popovich.

The hiring marks the third significant move from new Orlando GM Rob Hennigan, following his decision to decline to trade Dwight Howard for a middling cast of assets, and his re-signing of point guard Jameer Nelson to a three-year $25 million contract (with a partial guarantee in that third year, we submit) that we're pretty uneasy with. The pickup of Vaughn, after a month-long search, only seems right to us because … well, Jacque Vaughn's a pretty smart dude.

That doesn't have to carry over to the sideline, of course. There have been plenty of heady NBA players who took quickly to apprenticeships with great NBA coaches that haven't worked out all that well. Perhaps the league's most criticized coach, Los Angeles Clippers sideline clapper Vinny Del Negro, was a brain-first player who worked under Popovich; and yet he made no friends in Chicago with his coaching style, and has been raked across the coals in much the same way for his work in Los Angeles. Just because you're plucky, it doesn't mean you're perfect to take a team on as you enter your late 30s.

Some team it is in Orlando, by the way.

The Dwight Howard saga continues unabated, and with the Los Angeles Lakers in no real hurry to dump their hero in Andrew Bynum and no third team seemingly interested in making the Magic's day by taking one of their hideous contracts, Vaughn might have the luxury of starting the season with the NBA's best center on the team's payroll. Of course, Howard might not even show up to camp, still angered by what he apparently feels is Orlando's refusal to trade him. A refusal that is probably better left described as "Orlando's refusal to make an awful trade featuring him."

Beyond that, Vaughn will have a series of washouts that were only added to appease Howard. Ryan Anderson is gone, off to New Orleans in a sign and trade deal, and veterans like Nelson, Hidayet Turkoglu, and Jason Richardson remain. For now, at least, because we still have two months (!) left until the Magic have to strap those pinstripes on for media day.

In the interim, we'll have no idea as to what Vaughn will bring to the table, save for a wealth of experience working under coaches as disparate and esteemed as Popovich, Jerry Sloan, Roy Williams, Doc Rivers and Lawrence Frank. Vaughn was predictably gracious in his initial press conference on Monday, and you have to wonder if he isn't the perfect man to ride this nasty storm out. Like Dwane Casey in Toronto and Monty Williams in New Orleans, you get the feeling that Hennigan's hiring of Vaughn is more a case of asset-culling than a case of "we're makin' the third round!"-expectations. A 37-year-old hoops know-all to be around for whatever this ridiculous league throws at him: Hedo, or no go.

It was a search rife with good enough candidates, but even considering Vaughn's relatively short (again, just two years) tutelage as an assistant, you can't help but sign off on Hennigan's move to grab the former backup's backup.

Now, coach Vaughn, get ready for our Internet abuse when you give too many minutes to a guy that should be a backup to a backup. And welcome to the big chair.

Read the rest at: The Orlando Magic have hired Jacque Vaughn as its new head coach