by Brad Evans in General 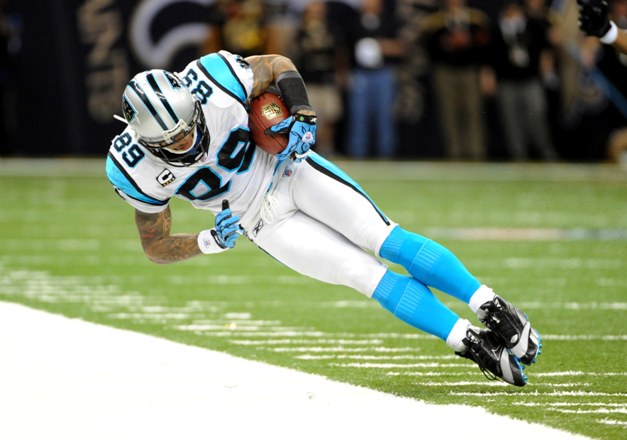 With doors at team facilities opening for business later this week, it's time for fantasy owners to fine tune their minds for the upcoming season. Same goes for the Roto Arcade crew. Monday-Wednesday this week we'll share four rounds/day from our annual mock exercise, a 10-team, non-PPR draft. Peruse. Ponder. And trash our picks in the comments section below.

1. Steve Smith, WR, Car — Cam's favorite target delivered a 79-1394-7 line last season and posted the second-best yards-per-catch average of his career (17.6). So yeah, he's still got it. Others considered: None. Easy call (Behrens)

2. Jeremy Maclin, WR, Phi — After a healthy and productive off-season, I'm expect … Wait, make that everyone is expecting a huge year from Maclin. He's a big talent attached to a terrific Philly offense. Others considered: Dez, Gates, Colston, Lloyd (Behrens)

3. Dez Bryant, WR, Dal — Mothers Against Dez (M.A.D.) may become a popular fantasy team name this year, but without his mama pressing charges it appears he'll avoid suspension. Outside of the incident he's had a spectacular offseason. A borderline WR top-10 campaign wouldn't be a surprise. Others considered: Bradshaw, Colston, Lloyd (Evans)

4. Fred Jackson, RB, Buf — Prior to landing on the I.R. last season, Jackson was an elite, top-four RB. Spiller will wrest away a few touches, but he'll likely shoulder at least 60-percent of the load. With that in mind and considering Buffalo's hardened O-line, he's a bargain in Round 5. Others considered: Bradshaw, Sproles (Evans)

5. Jordy Nelson, WR, GB — The regression police are taxing him far too much for the 2011 breakthrough. I wish I could bank on landing Nelson this late in every draft, but it's probably a one-time thing. Others considered: Bradshaw, Colston, Sproles (Pianowski)

6. Marques Colston, WR, NO — He's more injury-prone than you'd want your wideouts to be, but he's got a dreamy catch rate and life with Drew Brees. And the last time I went for Colston, things worked out fine. Others considered: Bradshaw, Sproles (Pianowski)

7. Ahmad Bradshaw, RB, NYG — Was No. 11 in fantasy PPG among those with at least 8 games played. With Jacobs gone, goal line work will be even more lucrative. Others considered: Sproles (Funston)

8. Demaryius Thomas, WR, Den — Hard to pass up here when you consider 1) how much of a matchup nightmare he is and 2.) Peyton's ability to take advantage of mismatches. Others considered: Bowe, Decker, Gates, Antonio Brown, Lloyd (Funston) 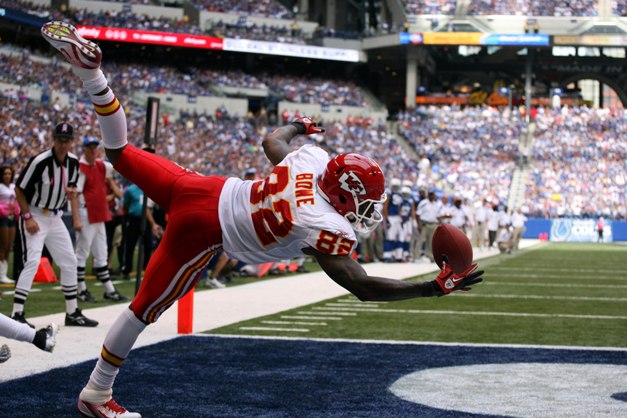 2. Aaron Hernandez, TE, NE — I think it's really close between Gates and Hernandez as fantasy's No. 3 tight end. Hernandez is just 22 years old, and it wouldn't shock if he put up similar numbers to teammate Rob Gronkowski this season. Others considered: Philip Rivers (Del Don)

5. Vernon Davis, TE, SF — He says it took a while to fully grasp the new offense. See his mad run in the playoffs (10-292-4)? I think he's got it down now. Others considered: Sproles (Pianowski)

6. Darren Sproles, RB, NO — He's a speciality player, sure, but there's no adequate way to mark him on the carpet. Even without Payton around, the Saints will find plenty of ways to deploy this elite weapon. Others considered: No one (Pianowski)

7. Vincent Jackson, WR, TB — Picking Jackson was akin to ordering a cheese-only pizza, incredibly boring. Tampa is a team built to run. But despite his expected inconsistencies another 1100-9 season a strong possibility. Others considered: D-Jax, Stevie Johnson (Evans)

8. Roy Helu, RB, Wash — Lucifer Shanahan's record of treachery is well-documented. Tim Hightower may start once healthy, but Helu is far and away the best all-around back on the 'Skins roster. Talent eventually trumps mediocrity. Others considered: Greene, Redman, Starks (Evans)

10. DeSean Jackson, WR, Phi — D-Jax was paid this off-season ($47M/5Y), so that saga is finally behind us (and him). He's still an explosive talent tied to a great offense. Others considered: McGahee, Starks, Meachem, Witten (Behrens) 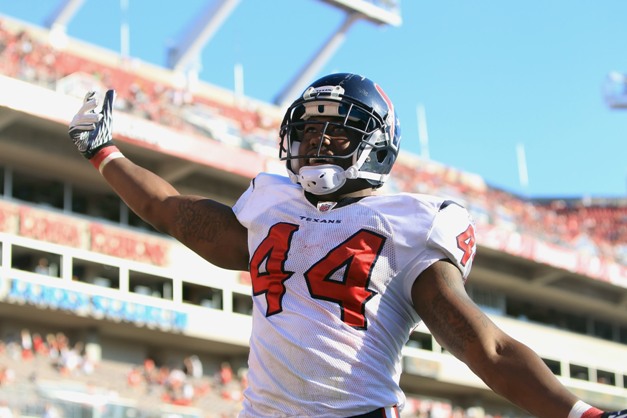 1. Ben Tate, RB, Hou — As a Foster owner, it's better to get Tate a round too early than to allow someone else to snag him. If he were Houston's starter, he'd be a first-round pick. Others considered: It was always gonna be Ben here (Behrens)

2. Robert Meachem, WR, SD — We already know that Meachem is a dynamic talent, because we saw it in 2009 (45-722-9). He's now a primary option, in line for a big bump in targets. Others considered: McGahee, Starks, several different QBs (Behrens)

3. Fred Davis, TE, Wash — With an inexperienced passer under center and coming off an impressive 2011, Davis could reach stratospheric heights in 2012. Recall, he yielded a top-five return in per game average among TEs last year. Others considered: None (Evans)

4. James Starks, RB, GB — He's a bit of a clunky plodder and Alex Green is breathing down his neck, but, for now, it appears Starks will be the primary carrier in an explosive Packers offense. Ryan Grant was a top-10 RB two years ago for Green Bay. Starks could emerge a viable RB2. Others considered: Isaac Redman, Shonn Greene (Evans)

5. Philip Rivers, QB, SD — In a shorter league, waiting on QB is not particularly penalizing. But as you approach 12 and 14 owners, you need to rethink that idea. Others considered: Eli Manning (Pianowski)

6. Isaac Redman, RB, Pit — It's going to be quantity over quality in this backfield, hope I click with some lottery tickets. Even if Rashard Mendenhall recovers quickly (and remember it was a late injury, a December blowout), Redman has the better skills package at the goal line. Others considered: Shonn Greene, Willis McGahee, 57 other running backs (Pianowski)

7. Jonathan Stewart, RB, CAR — He's the team's best back, he's behind one of the best O-lines in the league and he's money-motivated with free agency looming. Others considered: Peyton Hillis, Greene, Mikel Leshoure (Funston)

8. Peyton Hillis, RB, KC — There's at least 200 touches (including goal line work) to be had for what should be a strong running team and, if Charles' knee doesn't hold up, Hillis could find himself among the elite RBs once again. Others considered: Greene, Mikel Leshoure (Funston)

9. Tony Romo, QB, Dal — I always wait on quarterbacks, and getting Tony Romo at the end of round 7 here is the latest example why. Others considered: Torrey Smith (Del Don)

10. Torrey Smith, WR, Bal — Got 8.8 YPT as a rookie. Should develop into than just a deep threat moving forward. Others considered: Beanie Wells (Del Don) 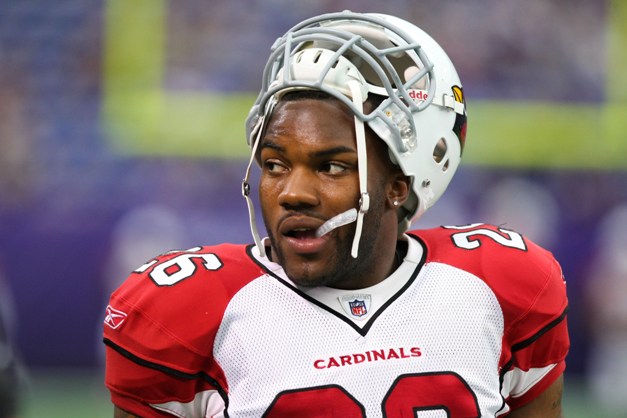 1. Beanie Wells, RB, Ari — Big injury risk and will have to battle Ryan Williams. But that's why a back who ran for 1,047 yards and 10 touchdowns over 14 games last season lasted this long. Others considered: Shonn Greene, Eli Manning (Del Don)

3. Jermichael Finley, TE, GB — TE was a need here. Happy to land one that was considered a letdown because he "only" tallied 767 yards and 8 TDs last season. Others considered: Greg Little, Sidney Rice, Denarius Moore, Pierre Garcon (Funston)

4. Greg Little, WR, Cle — Inexperience as a WR showed in his drop totals as a rookie, but he looks every bit the part of a No. 1 WR talent, and growth could be major in Year 2 with Weeden now at QB. Others considered: Sidney Rice, Denarius Moore, Pierre Garcon (Funston)

5. C.J. Spiller, RB, Buf — I'm a Jackson Sympathizer, but all I'm looking for right now is plausible upside in the backfield. The lightbulb went on for Spiller down the stretch in 2011. Others considered: Law Firm, McGahee, Ingram (Pianowski)

6. BenJarvus Green-Ellis — He runs in a straight line, sure, but he never fumbles and you can trust him in the clutch. Cincinnati can whistle the committee talk all they want - I'm not enamored with Bernard Scott. Others considered: Every other sketchy NFL running back (Pianowski)

8. Mikel Leshoure, RB, Det — Back at 100-percent after blowing out his Achilles last August, Leshoure is in line for early-down/goal-line work for the Lions this year. Don't be scared away by his two-game suspension. Come year's end, odds are he finishes with 7-9 TDs, 1,000 total yards. Others considered: Barry Sanders circa '95. That's it. (Evans)

10. Willis McGahee, RB, Den — No one is expecting a repeat of last year's numbers, but John Fox sure likes his vets. McGahee will get plenty of touches. In any case, this is a depth pick. Others considered: None (Behrens) 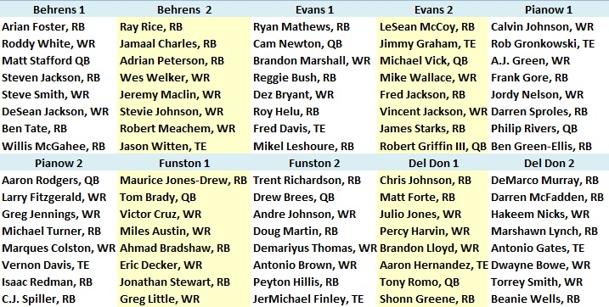