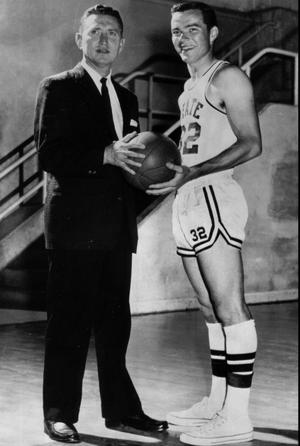 To celebrate the 50th anniversary of one of the landmark moments in the integration of college basketball, Michigan State athletic director Mark Hollis invited Mississippi State and Loyola to play a commemorative game at old Jenison Field House in East Lansing.

Neither the Bulldogs nor the Ramblers were willing to venture off campus to play at the site of their historic 1963 NCAA tournament matchup, so they found another way to commemorate that game.

Mississippi State and Loyola have agreed to a two-year home-and-home series that will begin Dec. 15 when the Bulldogs visit the Ramblers. That will be the first meeting between the two programs since an all-white Mississippi State team defied its state's unwritten laws of segregation and sneaked out of Starkvile to face predominantly black Loyola in the 1963 Mideast Regional semifinals in East Lansing.

"The 1963 SEC champion Bulldogs were given the opportunity previous Mississippi State teams were denied — to compete for a national championship against the best teams in the country," Mississippi State athletic director Scott Stricklin said in a joint statement from the schools.

"To do so, they had to defy a sitting Governor, avoid a court injunction and sneak out of the state. We're excited to join Loyola over the next two seasons in celebrating this historic occasion. Loyola won a national championship; Mississippi State helped to make for a better way of life."

It would have been a treat to see Mississippi State and Loyola play in aging Jenison Field House, but the home-and-home series is a good compromise. Credit Mississippi State for recognizing that it was worthwhile to agree to play on the road at a Horizon League school because of the attention the game will bring to a matchup of historical significance that deserves more spotlight.

The only downside to next season's game is that both teams are rebuilding. Mississippi State lost stars Dee Bost, Arnett Moultrie, Renardo Sidney and Rodney Hood off a team that underachieved last season, while Loyola welcomes eight newcomers after going 7-23 a year ago and finishing last in the Horizon League.

So yes, the quality of play won't be what it was in 1963 when the Ramblers went on to win the national championship, but that won't be the storyline anyway when the two programs meet for the first time in nearly a half century.

"We are thrilled that Mississippi State was willing to partner with us to recognize the historical significance of this contest," Loyola athletic director Dr. M. Grace Calhoun said. "Loyola's 1963 NCAA Tournament game versus Mississippi State served as a vehicle to challenge segregation and helped to forever change college basketball and civil rights in this country."

Read the rest at: Mississippi State and Loyola will commemorate 50th anniversary of Game of Change