James Harden is a tattoo now

First, Oklahoma City Thunder reserve guard par excellence James Harden was immortalized as a cake. Then, his signature bearded look — a favorite of Thunder fans everywhere — became the inspiration for a design tweak to an Oklahoma City building. But of course, these honors pale in comparison to the greatest* honor a player can receive — having his face inked into the flesh of another human being. 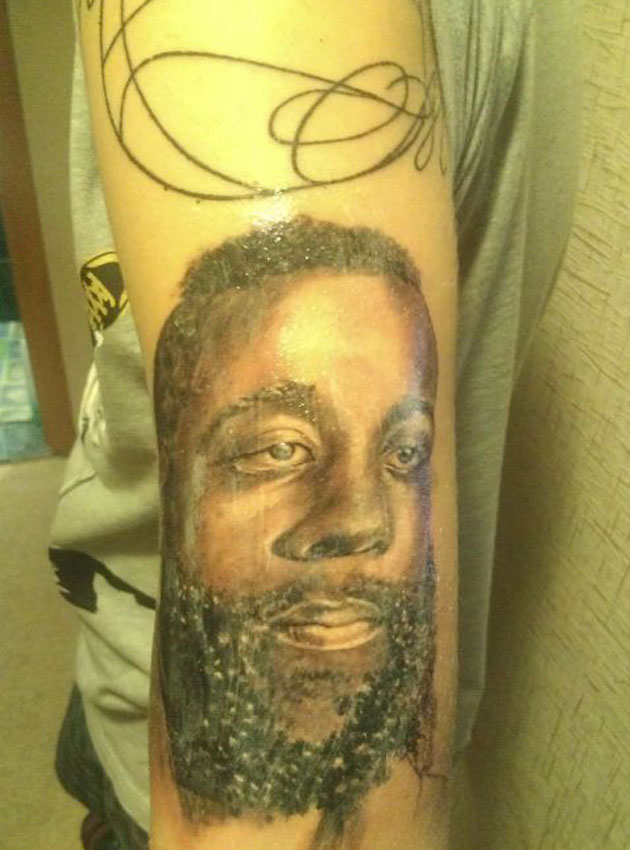 * May not be the greatest honor a player can receive.

This ... um ... artistic shot of Harden's mug tattooed on an unknown fan's left arm looks to have made its first appearance on Twitter on Wednesday evening, then began making the blog rounds, probably because no one can get over how good it looks.

Harden's visage is just the most recent in a long line of NBA-themed tattoos dreamed up by die-hard fans. In the past, we've seen a two-thirds-of-the-back tribute to Michael Jordan and Dennis Rodman, twins branding themselves with the autograph of Toronto Raptors draftee Jonas Valanciunas, a touching nod to Dirk Nowitzki's famed one-legged jumper, a somewhat less heartwarming posterior paean to Dirk's 2010 NBA title win, a remembrance of "The Dunk," a full-calf-print of a pensive Kobe Bryant and even a financially motivated immortalization of the moment when Charles Barkley and Dick Bavetta locked lips. Compared to some of those choices, a giant picture of James Harden's face on your arm sounds downright tame.

Most of the criticisms of the quality of this gentleman's Harden tattoo centers on the beard — specifically, on the bits of skin that come through underneath it, making it seem as if Harden has tiny torn pieces of paper dotting, or perhaps a litany of cotton swabs poking their way through, his face-topiary. I offer a different theory — so much does this fan love him some Sixth Man of the Year that he's elevated him to godlike, celestial status. He's taken Moby's groundbreaking ethos of personal construction to heart; he thinks that James Harden is made of stars. (Or, at least, that his galaxy of a beard includes many of them.) A fitting tribute to a 6-foot-5 playmaker whom this fan clearly thinks holds the moon.

(Also, if we're going to slag on anything, it should probably be those sleepy Tracy McGrady eyes. I mean, Harden generally looks awake on the court ... most of the time, at least.)

In any event, congratulations to both this man for making a bold choice that too few of us would dare to, and to James Harden for becoming a man's arm. With some of July and all of August still ahead of us, it appears likely that James Armden will be making all sorts of new friends in the days and weeks ahead. If you run into him at a beach or cookout near you, please remember to let me know.

Read the rest at: James Harden is a tattoo now