Tim Tebow’s packing on the pounds, and the Jets are fine with that 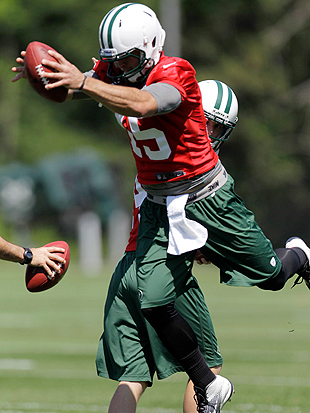 While it may not be possible for Tim Tebow to get any bigger in a celebrity sense, it appears that the New York Jets' new backup quarterback has been expanding in a literal form. Tebow maxed out at 249 pounds during the team's recent offseason activities -- anywhere from 7 to 9 pounds heavier than last year -- but there's a method to the musculature.

''I feel that I'm just training hard,'' Tebow said on Wednesday. ''I'm trying to be in shape, be strong enough to do anything, but also fast enough to run around a little bit as well.''

These are not fat pounds at all -- Tebow is known to be "crazy strong" in the weight room. Question is, where do the Jets plan to direct all that bulk?

One thing Tebow's always been is a very serious red zone weapon -- especially when he's taking off with the ball in his hands. This is a man who scored as many collegiate rushing touchdowns as Marshall Faulk, and he's had six rushing touchdowns in each of his first two NFL seasons. So, while Mark Sanchez gets the reps with the ones through minicamps and OTAs for the most part, the Jets are looking to find new things for Tebow to do. There's special teams, there's the Wildcat role (at least, as long as the Jets can get away with a scheme package deciphered by NFL defenses a couple years back), and there's the possibility that Tebow could be a traditional fullback when the Jets are close to the end zone.

Seems like an odd switch for a quarterback who helped the Denver Broncos win a playoff game last season, but as Rex Ryan said on Wednesday, the Jets see different attributes in the player they traded for in the offseason, and it's now up to them to maximize them. 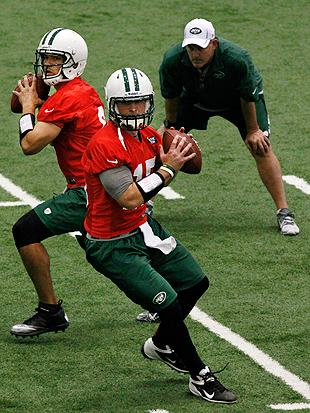 "We were the only people that ever had a problem with it, it seems like," Ryan said. "We look at it as we're adding a good football player, which we did. Is he behind Sanchez on the depth chart? Yes. He brings so much more to the table, obviously we talked about the Wildcat deal, we talked about the personal protector [on special teams], he's replacing a guy that I love in Brad Smith and everybody knows that and we were very effective running the Wildcat and he's basically replacing Brad in that role. He's also your No. 2 quarterback and personal protector as is Brad Smith."

So, that's a more unconventional role for Tebow, to be sure. He's always said that he'd do whatever it took to help whatever team he was with win, but there's an equal desire to be a starting NFL quarterback. Now that he's actually accomplished that (to whatever greater or lesser degree you may wish to argue), perhaps there's more of a willingness to branch out without the non-QB stigma hanging over him.

"One way you can look at it is, if the group you're going with, if you do a good job with them you should be doing an even better job with the ones," Tebow said about practicing with the second team. "You're running the same plays, I'm still getting timing with those wide receivers from 7-on-7, so whatever I'm asked to do that's what I'm going to do with all my heart."

It's what you'd expect from a guy who seems to find the positive in everything. Then again, this is the honeymoon phase -- we'll see what kinds of heck breaks loose the first time Sanchez fails to impress in the regular season, and the calls come for Tebow as we all know they will.