Being captain of a Stanley Cup winning team has its perks. For Dustin Brown, he got to be the first Los Angeles King to raise it on Monday night after they defeated the New Jersey Devils in six games. He'll also end up spending the most time with the Cup as each player and staff member gets a day to celebrate.

On Tuesday morning, the Cup was in Brown's backyard and it was his kid's turn to take a drink out of the bowl. No, there weren't any alcohol beverages. Instead, Brown's two boys, Jake and Mason, took the opportunity to do what we all did as kids: blow bubbles while drinking chocolate milk. Via the LA Times: 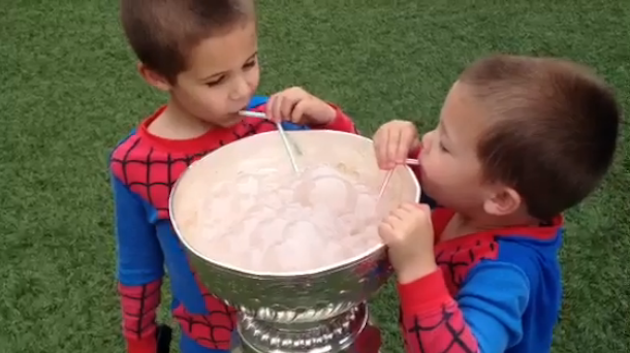 The matching Spider-Man pajamas really is a nice touch.

The Stanley Cup will be busy this week as it will be appearing on "The Tonight Show with Jay Leno" on Tuesday with Brown and then later on "Jimmy Kimmel Live". The summer of celebration continues for the Kings on Thursday as the city of Los Angeles will hold a parade ending with a championship rally at Staples Center.

Other popular content on Yahoo! Sports:
• Jay Hart: After 8,200-mile trek, 'Keepers of the Cup' hand it off to the Kings
• Video: Kings' Drew Doughty on L.A.'s first Cup: 'I think we've made it Hockeytown'
• Thunder rally past Heat to win Game 1
• Tim Brown: Baseball is relevant again in Los Angeles