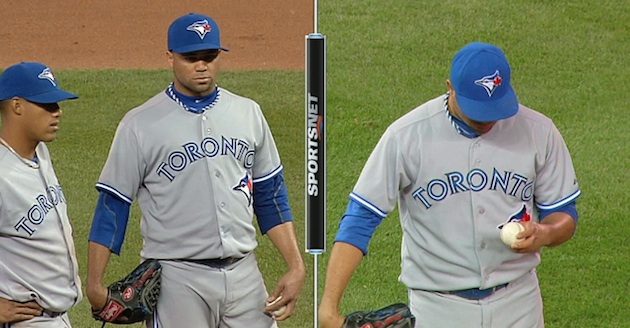 On the heels of the Robbie Ross wrong jersey post comes this video of Toronto Blue Jays reliever Luis Perez being ordered to change his undershirt after reaching the mound for his appearance during Thursday's 6-2 win over the Minnesota Twins.

Yup, must be two clothing miscues for the price of one day here on Big League Stew.

As you heard on the highlight, Blue Jays broadcaster Buck Martinez was initially confused and thought Perez had to change his shirt because the sleeves were different lengths. But the truth was that Perez's first undershirt featured silver piping down the side — a no-no that's spelled out in the MLB rulebook — which caused the wardrobe change delay:

"1.11 ... (2) Any part of an undershirt exposed to view shall be of a uniform solid color for all players on a team. Any player other than the pitcher may have numbers, letters, insignia attached to the sleeve of the undershirt. (3) No player whose uniform does not conform to that of his teammates shall be permitted to participate in a game."

What's interesting about this whole story is that suspect sleeves were spotted by home plate umpire Bill Welke. Guess his vision — and maybe his fashion sense — is a lot better than his brother Tim's.