Tim Tebow will be the subject of an E! special 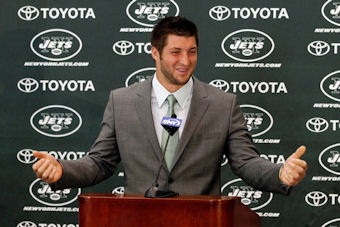 He's not going full Lamar Odom, thankfully, but Tim Tebow's mug will be all over the E! Network soon. The E! people (who are obviously not as cool as the Y! people) are making a 30-minute show devoted to profiling the Jets back-up quarterback/punt protector. Here's more from Richard Deitsch at SI.com:

SI.com has learned that the Jets' quarterback will be the subject of a 30-minute special airing on E! Entertainment Television sometime in July. A league source says the show is being done without Tebow's participation.

So, basically, it'll pretty much just recap everything we already know about Tim Tebow in a tidy 22 minutes. Which will be great, because I've barely heard a thing about the young man. I heard he has some kind of interest in religion? I don't know. I'm just so glad this is happening, because Tebow probably won't get enough media attention now that he's playing in New York.