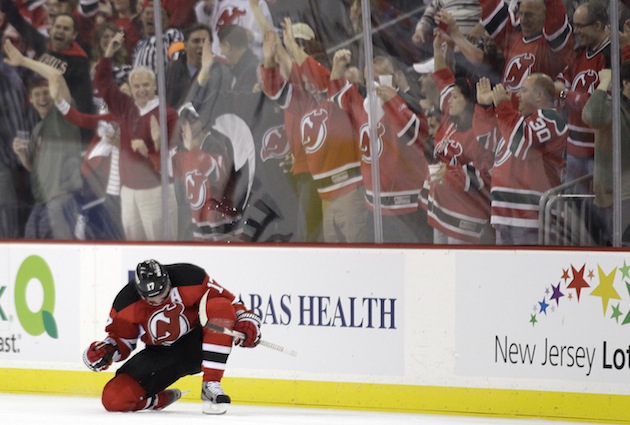 Kovalchuk returned to the Devils' lineup after missing Game 2 with a lower-body injury. He didn't miss a beat scoring a goal and adding two assists, including one on Alexei Ponikarovsky's overtime winner as the Devils beat the Philadelphia Flyers 4-3 to take a 2-1 series lead.

Doughty's three-point night helped power the Kings past the St. Louis Blues 4-2 to take a commanding 3-0 series lead. Jonathan Quick needed just 18 saves as the Kings have won seven of their eight playoff games and are within a victory of advancing to the Conference Final for the first time since 1993.

Ponikarovsky was the hero for New Jersey scoring the overtime winner with 2:39 left in the extra frame:

Richards' goal in the second period ended Los Angeles' 0-for-30 skid on the power play ... The Kings improved to 5-0 on the road in the playoffs ... Chris Stewart scored both St. Louis goals.

Dishonorable mention: Philadelphia failed to score on two power plays in overtime ... Sean Couturier suffered a lower-body injury in the first period and did not return ... St. Louis has lost three straight games in regulation for the first time this season ... Brian Elliott has allowed nine goals on 43 shots over the past two games and is 3-3 since Jaroslav Halak went down with an injury ... The Blues are 0-for-10 on the power play in the series.